Which Prisoners Get Visitors?

Prisoners who can maintain ties to people on the outside tend to do better — both while they’re incarcerated and after they’re released. A new Crime and Delinquency article by Joshua Cochran, Daniel Mears, and William Bales, however, shows relatively low rates of visitation. The study was based on a cohort of prisoners admitted into and released from Florida prisons from November 2000 to April 2002. On average, inmates only received 2.1 visits over the course of their entire incarceration period. Who got visitors? As the figure below shows, prisoners who are younger, white or Latino, and had been incarcerated less frequently tend to have more visits. Community factors also shaped visitation patterns: prisoners who come from high incarceration areas or communities with greater charitable activity also received more visits. 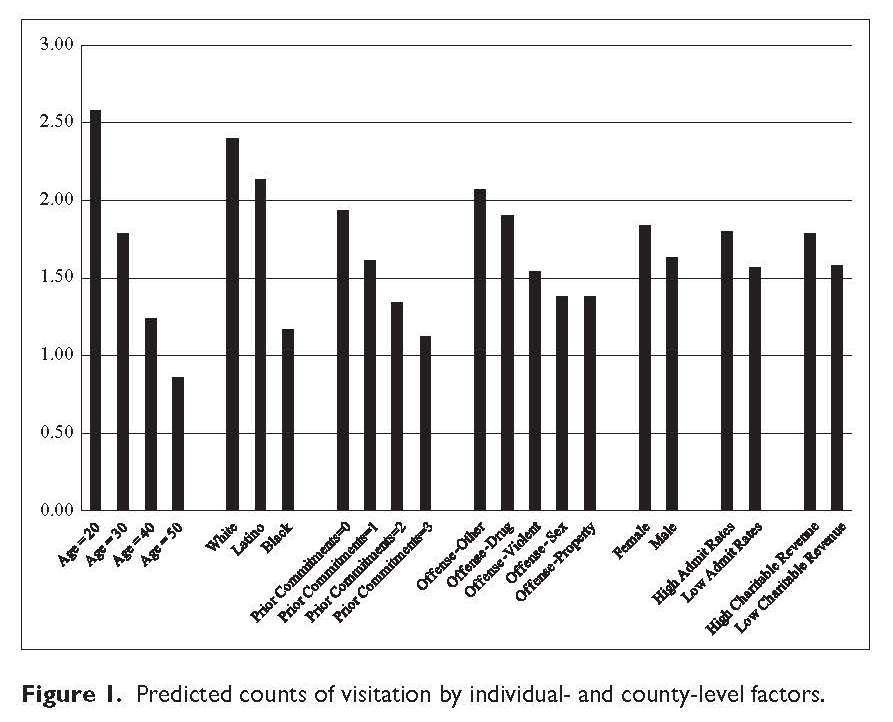 There are some pretty big barriers to improving visitation rates, including: (1) distance (most inmates are housed more than 100 miles from home); (2) lack of transportation; (3) costs associated with missed work; and, (4) child care. While these are difficult obstacles to overcome, the authors conclude that corrections systems can take steps to reduce these barriers, such as housing inmates closer to their homes, making facilities and visiting hours more child-friendly, and reaching out to prisoners’ families regarding the importance of visitation, both before and during incarceration.

Situs Togel Resmi think your website is pretty good. Many articles are very useful for everyone. I am sure your website will grow in the future. I will always support your website, hopefully more advanced. keep the spirit...thanks

I read some articles on this site and I think your blog is really interesting and has great information. Thank you for your sharing...
Bandar Togel thanks so much...

I read some articles on this site and I think your blog is really interesting and has great information. Agen Togel . Thank you for your sharing.

Agen Judi Togel like to read this article.. because this article very nice.. i hope your website will grow up in ranking google.. thanks for sharing this

Love your work, simply want to tell you that I am very new to blogs and truly loved this web page. Most likely I’m likely to bookmark your site . You really have excellent articles. Kudos for sharing with us your web page. Bandar Bola Terpercaya

. love all the posts, I really enjoyed, I would like more information about this, because it is very nice. Link Alternatif DelimaPoker Thanks for sharing. ...

This was such an awesome article, gratitude for posting this mister. Ive studied many a diverse blogs connected to this study and this one right here is unquestionably in the top drawer. Great work and I look forward to the next posting. DominoHalo How long do you think it will be before you create the next article on the website?

Really liked this part of the article, Twin Poker88 with a nice and interesting topics have helped a lot of people who do not challenge things people should know you need more publicize this so many people who know about it are rare for people to know this, Success for you

I really enjoyed, I would like more information about this, Bandar Togel because it is very nice

beneficial for everyone, Agen Togel It is one of the best sites that I have visited

All the contents you mentioned in post are too good and can be very useful. Togel Online I will keep it in mind,

.This is my first visit to your blog! We are a team of volunteers and starting a new initiative in a community in the same niche. Your blog provided us beneficial information to work on. Kapaldomino You have done a outstanding job

the article is very good, Papadomino thanks so much

Thanks for any other informative web site. Delimapoker Where else may I get
that kind of information written in such a perfect method?

This is unique blog, really awesome and also factual. Dewacintaqq wait for another good article

Here is a pretty interesting article about this https://www.citizensinformation.ie/en/justice/prison_system/visiting_someone_in_prison.html