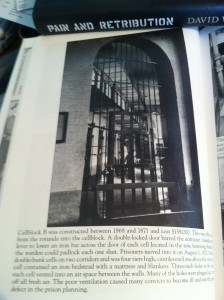 The Oregon State Penitentiary just “celebrated” its 150-year anniversary last week.  150 years is a long time in a west coast state; as a point of comparison, Oregon State University was founded in 1868, so while it is nearing the 150 year mark, the state’s oldest prison has been around longer than its land grant college.

But should we celebrating the longevity of a state prison? As one of my inside friends and collaborators pointed out to officers on the inside: what is there to celebrate? Shouldn’t we instead consider our current prison system a massive failure, given that approximately 1 in 100 people are behind bars and multitudes beyond that are affected by their incarceration? And, if and when they get out, they will face the stigma of a criminal conviction, further limiting their life chances and opportunities for successful reintegration.

To add to the irony of this situation, the men incarcerated in the Oregon State Penitentiary were put on lockdown the day of the celebration so that the dignitaries could honor the anniversary without having to worry about having actual contact with prisoners (or “adults in custody” which is now the preferred label in the state).  So, for the prisoners, the “celebration” of this anniversary kept them locked in their cells unable to work at their jobs, unable to go to classes or groups, and unable to go to the yard for exercise and fresh air.

I happen to like OSP a lot as far as prisons go, and I spend a good deal of time there working with the men inside.  But, the 150 year mark feels like it should be a time to reflect and think about the future rather than celebrating a century and a half of men locked behind bars.