Prevalence of Violence in Households with Children

A new Bureau of Justice Statistics Report by Erica Smith and Jessica Truman shows a significant decline in the Prevalence Of Violent Crime Among Households With Children, 1993-2010. The study is based on the large-scale annual National Crime Victimization Survey (NCVS) and it differs from standard victimization reports in its explicit focus on households with kids.

The chart below shows the percentage of households with children in which at least one member age 12 or older experienced nonfatal violent victimization (rape, sexual assault, robbery, aggravated assault, and simple assault) in the previous year. This does not necessarily mean that the children witnessed the violence or that they were even aware of it, but it does give us a pretty good sense of whether kids are living with household members who are themselves experiencing violence. And the NCVS provides the sort of high-quality nationally representative survey data that are useful in charting big-picture trends. According to the report, this rate dropped from 12.6 percent of children to 3.9 percent in the past 18 years (the blip in 2006 is due to a shift in methodology). That’s an impressive 69 percent decline since 1993. 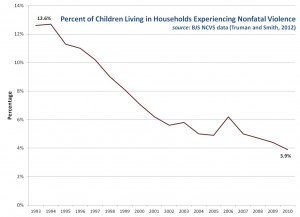 These numbers still seem high to me, but I think it is because simple assault (which encompasses a pretty broad range of behavior) accounts for the bulk of the violence (about 2.6 percent of the 3.9 percent total in 2010). Which kids are most affected? Children in urban areas, children of color, and lower-income children are most likely to live in households experiencing violent victimization. Rates are significantly higher for urban households with children (4.5 percent) than for rural (3.6 percent) or suburban (3.2 percent) households. With respect to race and ethnicity, rates are lower fir households headed by Asians/Pacific Islanders (1.4 percent) than for households headed by multiracial persons (5.6 percent), American Indians/Alaskan Natives (5.3 percent), African Americans (4.9 percent), Hispanics (4.0 percent), and Whites (3.4 percent) (the authors caution, however, that estimates for several of these groups are based on a small number of cases). There is also a very clear socioeconomic gradient to violent victimization: the greater the household income, the lower the rate of violent victimization, as shown below. 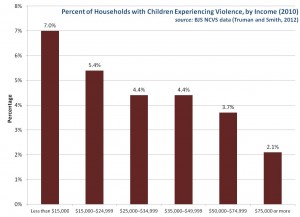 This sort of story might be familiar to criminologists: the overall crime situation is improving, but victimization is heavily concentrated among the most disadvantaged. Nevertheless, this report is important and useful in showing how children’s proximity to violence is changing in some ways — and not changing in others. 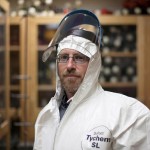 I rarely write about crime fiction, since most of it seems completely orthogonal to the phenomenon that I’ve spent a career studying. Quentin Tarantino, Martin Scorcese, and the Brothers Coen are surely gifted filmmakers, but the hyperviolent worlds they create are pure fantasy — bearing about the same relation to the lived reality of crime as the average pornographic film bears to the lived reality of human sexuality. By confronting compelling characters with horrible moral choices, however, the best crime fiction can actually tell us something meaningful about human frailty, morality, and justice.

I think Breaking Bad succeeds on this level, though I still switch over to the Hallmark channel or America’s Cutest Pets during its ugliest moments. I have many questions about the show, but Joe Kleinschmidt’s Minnesota Daily article answered one of the biggies. Forget about the crime, how’s the chemistry? Mr. Kleinschmidt put the question to Bill Tolman, the straight-up brilliant Minnesota chemistry professor and department chair pictured above.  I was surprised to learn that the show’s etch-a-sketch explosive might’ve actually worked and that the makeshift battery that Walter White constructs in the desert might indeed have started his stranded mobile meth lab:

Walt uses the RV’s brake pad for its mercuric oxide and graphite. This serves as the cathode, which gains electrons. He also gathers spare metallic parts, nuts and bolts, for the zinc they contain. The zinc serves as the anode, where the other electrochemical half-reaction occurs (loss of electrons). With potassium hydroxide solution leftover from their meth-making process serving as electrolyte (to conduct charge), Walt uses a sponge to separate the anode and cathode. Finally, he connects the cell components with copper wire and connects the parallel batteries to the RV’s jumper cables. “The only question now is, will this supply enough current?” Walt says in the episode, posing the only hang-up in his plan. “When he said that, I thought, ‘Yes! That’s the problem!’” Tolman said. But it worked. As Walt sets the batteries up and connects the wires, he creates a spark and the RV is revived. “It was a perfectly reasonable electrochemical cell using mercuric oxide and zinc,” Tolman said.

Of course, the show takes a few liberties — hastening a body’s dissolution in hydrofluoric acid, for example, and tossing around mercury fulminate like a bag of powdered sugar. All told, however, Breaking Bad does pretty well on the chemistry. As for its portrayal of drug markets, I’d have a few more quibbles…