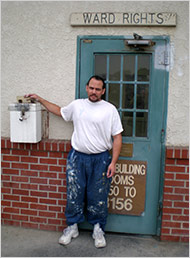 long time no blogging — i’m feeling a little guilt about that, but it is trumped by feeling overwhelmed by my schedule and projects these days.  we’re on a quarter system at oregon state, so we’re just entering week 5 of our spring quarter and hitting midterms.  as i wrote about earlier, i’m still holding an informal class in the girls’ correctional facility one night a week, and i’m also teaching the first inside-out class in a new (to the program) prison one night a week.  i’m also trying to organize community service-learning projects for my 45 delinquency students, which is a huge hassle but will hopefully be worth it.  i guess all of that is to say i’m still committed to public criminology, but most of it is incorporated into my teaching at the moment.

this story in the new york times caught my eye, however, and inspired me to log on and write this post.  at the age of 16, donald schmidt committed a terrible crime; he molested and drowned a 3-year-old girl while high on meth.  the strange part is that schmidt is now 37 years-old and has been incarcerated in juvenile facilities for more than two decades.

Under California law, juvenile offenders who commit serious crimes can be kept in the system until they are 25. Mr. Schmidt’s detention, though, has been extended under a rarely invoked state code that allows continued detention if a jury finds the inmate has a “mental disorder, defect or abnormality that causes the person to have serious difficulty controlling his or her dangerous behavior.”

Because Mr. Schmidt was convicted as a juvenile and continued to be held under the mental health code, he cannot be transferred to an adult facility.

The code requires such petitions for extended detention to be renewed or rejected every two years. On Tuesday, prosecutors will again go to trial to argue that Mr. Schmidt should remain in juvenile custody, an argument they have made repeatedly, and successfully, since 1997, when he was first eligible for release.

in the earlier version of our pubcrim blog, chris and i both wrote about the civil commitment of sex offenders, but i don’t think i’ve ever heard of a case of a juvenile sex offender held for more than two decades in the juvenile system.  presumably, with petitions for extended detention renewed every two years, he could be held in juvenile custody his entire life. it must be tricky for staff members and incarcerated youth to figure out how to interact with him in the closed community of the institution.

what a strange and sad case. 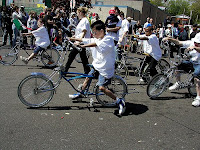 there’ve been a few problems at the big cinco de mayo celebration on st. paul’s west side, including a drive-by shooting last year. this year, the city is seeking an injunction against 10 suspected members of the sureno 13 gang.

having grown up around the west side, i’m sympathetic to the organizers’ concerns about public safety in a growing, kid-friendly event. as a criminologist, i’m well aware of the repeated violence and disruption in similar festivals, as well as this festival in previous years. that said, i’m agnostic-bordering-on-skeptical about the claimed effectiveness of such narrowly targeted civil gang injunctions. as a citizen, i’m concerned about restrictions on freedom of assembly, movement, and spatial exclusions.

according to the pi press, the city got the injunction by proving that the gang is a public nuisance whose members have been involved in at least three instances of gang activity in the past 12 months. a ramsey county judge ordered the 10 alleged surenos 13 gang members to be prohibited from engaging in the following activities inside a circumscribed “safety zone” on the west side from 4 p.m. may 1 to 6 a.m. may 3:

about 100,000 people attend the event, so the order only targets .01% of the anticipated participants — the other 99.99% are apparently free to flash gang signs and consort with other gang members. it would be impressive police work indeed if such strategies proved effective in reducing violence at festivals. what happens if any of the 7 named adults or 3 juveniles violates the court order? violation is a misdemeanor, which also provides probable cause for police to remove them from the event.

the released: a new frontline documentary

via susan tucker at the open society institute:

The Released a new FRONTLINE/PBS documentary, will be broadcast and made available online starting Tuesday, April 28th at 9pm est.

This documentary promises to be as powerful and disturbing as The New Asylums, also from MeadStreetFilms, where we saw seriously mentally ill men in cages receiving “therapy” and being shuttled back and forth between a maximum security prison in Ohio and the state’s hospital for the criminally insane. And we came to understand the genuine complexity of their situations and yearned for more equally complex and humane responses.

The Released follows some of the same men featured in the first film who were subsequently returned “to the community” — but more often to the street — and in some cases have ended up back in prison.

We’re pleased that OSI has been able to support dissemination of the film and development of a, highly informative website… Similar support was awarded for The New Asylums (which can still be seen on Frontline’s website) and before that for The Exonerated by director Ofra Bikel, also shown on PBS.

i’ve read some good histories on minneapolis’ old gateway and skid row, but this is the first film i’ve seen from the period. it isn’t pretty, but the footage is amazing. the narrator is johnny rex, proprietor of the sourdough and king of skid row.

flyer for a yard sale, minneapolis 1980

via mnspeak and stuff about minneapolis:

this sign dates to the early days of the incarceration boom. with so many going to prison each year, i’m surprised that i’ve never seen such an advertisement before. more typically, i see divorce cited as the reason that a car or household goods must be sold.

perhaps prison is too stigmatized to make for an effective marketing pitch. note that the parenthetical — (for tax evasion) — appears to have been added after the rest of the sign was prepared. this presumably destigmatizes the seller so as to overcome customers’ fears of visiting a prisoner’s home. it could also draw buyers, signalling that high-quality goods will be available at the sale. that said, bernard madoff would have a tough time attracting customers if he offered a full-disclosure parenthetical: (for securities fraud, wire fraud, mail fraud, money laundering, perjury and making false filings with the SEC). i suspect he’ll use christie’s instead.

depression blogging and the sociological imagination 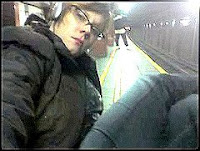 So, yesterday was exciting, what with my article at MinnPost.com. It was interesting, because I had no idea that depression blogging was a trend! How exciting for all of us sad people.

there are clear elements of both group therapy and personal journaling in such blogs, carried along by the writer’s honesty and wit. i’d guess that depressed bloggers generally have the same sort of motivations and procreant impulses as non-depressed bloggers, but i really have no empirical basis to make such a claim.

i expect we’ll be seeing a spate of articles in coming years on such basic questions. first, there will be cross-sectional studies asking whether bloggers are more X than non-bloggers (where X=depressed or sleepy, dopey, happy, or bashful). second, there will be longitudinal pre- and post-test studies that ask whether the experience of blogging makes bloggers more or less X at time t than at time t-1 (perhaps relative to a matched comparison group of non-bloggers at t and t-1). third, we’ll likely see an event history approach to blog duration, complete with time-varying covariates (e.g., work hours, family changes, grumpy commenters).

on balance, i’d bet that most of this research will show that persistent bloggers realize some sort of benefit from the experience. more personally, i see blogging as a restorative tonic for the sociological imagination, as it gets me writing and thinking about a diverse array of people and events. kieran, as usual, put this best:

As a thing for academics to do, writing a blog can be an endless black hole of self-absorbed wittering — or, it can cultivate a capacity to stay interested in things and to write about them fluently in the course of everyday life. One model can be found at the back of The Sociological Imagination, where Mills has an essay called “On Intellectual Craftsmanship.”

blogging may not have honed my intellectual craftsmanship, but i know it helps me maintain the “playfulness of mind” mills described — and playfulness comes in handy when our research takes us to depressing places.

after confessing to 14 murders, chicago mobster nicholas calabrese was sentenced to serve 12 years and 4 months by u.s. district judge james zagel. in fact, he could be out as early as 2014, given that he’s been incarcerated since 2002 and he’ll be credited for time served.

why does an admitted mob hitman merit a lighter sentence than, say, the poor guy in florida who bought too much oxycontin to manage chronic pain? because mr. calabrese gave up the family secrets, that’s why, and those secrets helped bring down bosses frank calabrese, joey “the clown” lombardo, and james marcello, as well as lesser enforcers and wayward police officers.

there’s a clear utilitarian logic behind cutting such deals, in which the social benefits of locking up the big fish are thought to outweigh the social costs of giving preferential treatment to hit men who snitch. yet how is a judge supposed to balance the clear value of mr. calabrese’s cooperation against the clear harm he’s done? and how should a judge or prosecutor weigh the normative costs of cutting deals with some of most destructive individuals they encounter in the criminal justice system?

the tribune quotes a u.s. attorney on the paradox, who notes that “pure justice” would have meant lifetime incarceration. nevertheless, unlike a lot of informants, mr. calabrese was uniquely positioned to bust up the “toughest nut to crack” — and his testimony was indeed a boon to public safety. moreover, the deal offers a general incentive to others, as well as a specific incentive to mr. calabrese: if others come forward, they know there’s at least a chance they won’t spend the rest of their lives in prison.

of course, 12 years (or 4 years and time served) still feels like an arbitrary and unsatisfying compromise. such sentences remind me of harry blackmun’s famous opinion, as he fumbled around for some sort of medical, cultural, and legal rationale to specify the precise moment at which a fetus becomes a human being. while a judge may act with a pragmatic orientation toward the greater good, any cut-point between zero and life (or conception and birth, i suppose) is likely to seem arbitrary. i’m not sure whether such judges are compromised or courageous. probably both.