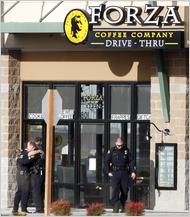 Sad news from my hometown area – four police officers were killed in an ambush attack in a coffee shop outside of Tacoma, Washington.  I just drove by that coffee shop yesterday; I can hardly imagine it as the site of such a gruesome attack.  The Lakewood Police Department is only five years old, and losing four of its members in a targeted attack must be devastating.

It’s a reminder that police officers face danger – both obvious and hidden – every day.  I’ve known officers who died in the line of duty, and some of my favorite students over the years aspire to and have gone on to become police officers.

Our police put their lives on the line every day, and tragedies like this remind us of the risks they continually take to keep our communities safe. My heart goes out to the family, friends and co-workers of these officers, as well as the entire law enforcement community.

Thanks to the police officers who risk their lives every day and to their families who live with the fear of losing them.  For more information on this shooting, the Tacoma News Tribune has extensive coverage of the case.

Erica Smith and Donald Farole of the Bureau of Justice Statistics just released a new report on domestic or intimate partner violence (IPV). The sample is based on 3,750 cases filed in 16 large urban counties in May 2002.

When I present on IPV in classes, I’m occasionally asked about differences by gender and sexual preference. The chart below shows some characteristics of the 3140 cases (84 percent) with male perpetrators and female targets in blue, the 441 cases (12 percent) with female perpetrators and male targets in orange, and the 146 same-sex cases (4 percent) in green. [I suspect they didn’t distinguish male-male from female-female because the numbers were getting small.] 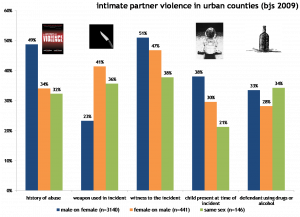 Some of the differences seem large to me. First, about half of all male-on-female dyads involve a prior history of abuse, relative to 34 percent of female-on-male dyads and 32 percent of same-sex dyads. Second, female-on-male and same-sex cases are far more likely to involve a weapon than male-on-female cases. Contrary to the old idea that a man must be stabbed before a woman will be arrested for IPV, however, only 41 percent of female-on-male IPV cases involved a weapon. Third, there are no other witnesses at all in most same-sex IPV cases, but there is a child present in 38 percent of male-on-female cases. Finally, regardless of sex or sexual orientation, the perpetrator was using alcohol or drugs in about one-third of the IPV cases. [Since that last number seems a bit low to me, I’d check how it was measured before citing it].

See the report or the source data for more information.

in the land of the hideous, the somewhat-less-than-loathsome man is king

OKCupid, an online matchmaking site, offers data on gender and perceived attractiveness that I might use in my spring deviance course (via boing). The figures might help me make a Durkheimian society of (hot) saints point about the relative nature of beauty and a Goffman point on stigma affecting social interaction, while providing another illustration of the taken-for-grantedness of heteronormativity.

In any case, the first figure shows that male OKCupid ratings of female OKCupid users follows something like a normal distribution, with mean=2.5 on a 0-to-5 scale from “least attractive” to “most attractive.” Also, women rated as more attractive tend to get more messages. At first, I thought I saw evidence of positive deviance here, since women rated as most attractive get fewer messages than those rated somewhat below them — the 4.5s garner more attention than the 5.0s. But, as I’ll show below with the next chart, that would probably be an incorrect interpretation — confounding the “persons” in the dashed lines with the “messages” in the solid lines. 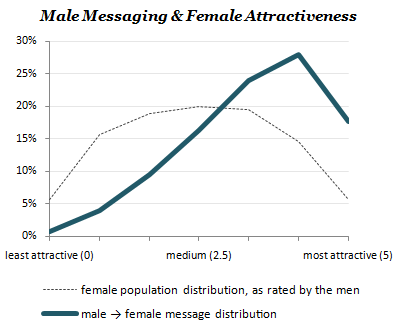 The next figure shows that female OKCupid users tend to rate most male OKCupid users as well below “medium” in attractiveness. According to OKCupid, “women rate an incredible 80% of guys as worse-looking than medium. Very harsh. On the other hand, when it comes to actual messaging, women shift their expectations only just slightly ahead of the curve, which is a healthier pattern than guys’ pursuing the all-but-unattainable.” 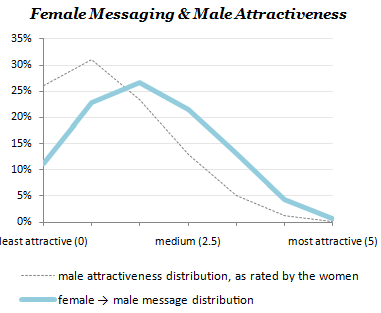 Hmm. The latter point isn’t wrong, I guess, but it shouldn’t obscure the bigger point that more attractive men still get more messages than less attractive men. Again, note that persons (OKCupid members) are the units of analysis for the dashed lines and messages (messages sent by OKCupid members) are the units for the solid lines. On first scan, I read the graph as suggesting that the top “attractiveness quintile” was getting fewer messages than the bottom attractiveness quintile — that uglier men were actually doing better than more attractive men — but that’s not the case at all. Instead, it just means that in the land of the hideous, the somewhat-less-than-loathsome man is king. 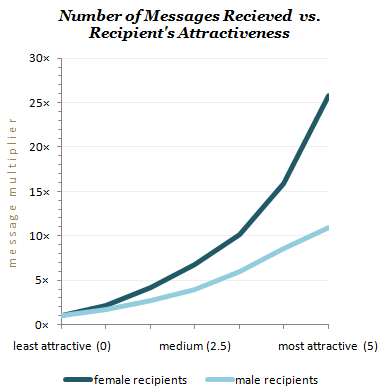 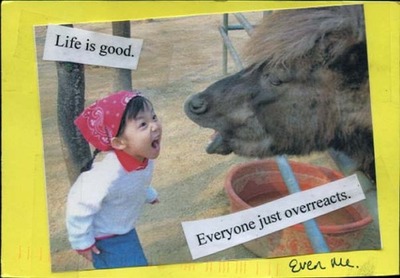 The Marion County Jail in Salem, Oregon is instituting a new policy on January 1st that will limit incoming and outgoing mail to postcards only.  From the story:

Current policy allows letters with no limit on the number of pages. The policy will save the county money and man-hours spent sorting through more than 1,000 pieces of general mail inmates receive each week.

“It’s about efficiency and safety in the workplace.”

Inmates will be required to purchase standardized pre-stamped 3.5-by-8.5-inch postcards from a commissary. The postcards feature a photo of the jail. The new rules will not affect mail to and from public officials or legal mail.

This is, of course, a cost-saving measure for the jail and the county.  Holland estimates that the county spends approximately $60,000 per year in hours sorting jail mail; he believes switching to postcards only (other than legal documents) can save the county half of those costs.

While it is obviously the case that those in jail have limited freedom and rights, it does seem to me that a postcard-only policy can be damaging not only to the inmate but to his/her family and friends, as well.  Have you written or received a postcard lately?  With the exception of some of the creative cards on PostSecret, I don’t imagine a lot of deep thoughts or emotions being communicated on a postcard.  While jail/prison mail is always screened for safety issues, the writers can at least feel that they have *some* level of privacy in mailed letters.   Letters from inmates are clearly marked as such on the outside of the envelope, but it does seem to take labeling and stigma to a whole new level to force inmates to send postcards showcasing photos of the jail to their children.

The ACLU of Oregon weighed in with this comment:

“We think that it is a bad policy if it is going to limit the way the inmates are going to be able to communicate with their families in a meaningful way,” said Jann Carson, associate director of the ACLU of Oregon…”One of the best ways that we make ex-convicts reintegrate is keeping those ties to families while they are incarcerated,” Carson said. “If this policy is going to make that more difficult, that is troubling.”

Back in grad school, my advisor and mentors gave so much and so generously that it sometimes felt like stealing. I stole from everybody at Wisconsin, but especially from the man in those badass plaid pants. So when I heard that Irv Piliavin died this week, my sadness for his loving family was mixed up with my gratitude for his inspiration.

When faced with a risky research project or crazy new venture, I can sometimes steel my nerves by asking, “What Would Irv Do?” For academics who knew Irv, this is a terrifying question. Brilliant and mercurial, he was not one to play it safe. I’ll offer a few words about his work as evidence for his creativity and inspiration. Then I’ll share a more personal story.

Irv made research sound like a wild weekend in Vegas. He told ripping good stories about field experiments in Journal of Personality and Social Psychology, putting fake drunks on trains to study helping behavior. Irv rode with police and published an American Journal of Sociology article showing how “demeanor” swamps other factors in predicting arrest. He offered up a powerful control theory of delinquency in Social Problems, four years before Travis Hirschi’s Causes. Irv brought a strong test of rational choice and deterrence theories to American Sociological Review in 1986. And, when they said it couldn’t be done, he took to the streets and government centers to conduct systematic longitudinal research on careers in homelessness and foster care.

I’ve got a few Irv stories, both shareable and non-shareable, but I’ll just relate one that brought us together. One day in my first or second year of grad school, Irv noticed that I hadn’t slept much the night before. Somewhat reluctantly, because we didn’t know each other all that well, I told him about this recurring dream.

In the dream, I was drinking coffee at my kitchen table, feeling drugged or hungover and struggling to piece together the previous night. I’m looking down bleary-eyed at a newspaper and see this front-page story of a gruesome murder. As the letters and words start to come into focus, a realization builds and builds before lodging unshakeably in my mind: I was the killer.

Well, as soon as Irv heard the word “newspaper,” he recited the rest of my dream with perfect accuracy. I figured it must’ve been in a movie or Raymond Chandler story, but instead he says, “Maybe so, but I’ve had that dream since I was 17.” Irv figured we were guilty about unpunished crimes that blew up into murder in the dark of the night, though he covered his bases (You didn’t actually kill anyone, did you? Me neither). Then he said it took a little guilt to write good criminology — to cut through the layers of stigma and moral repugnance and get to the essence of the thing — and hinted that I might have a little potential along those lines.

So, I’ve got real gratitude for Irv and a real pang of sadness for his great love (and equally brilliant collaborator on those subway studies). But perhaps I’m repeating myself. Here’s what I wrote in 1995:

To the extent that I’ve stolen from others, I’ve probably stolen more ideas from Irv than from anyone else. As I leave Wisconsin, I only wish I had committed more of them to paper.

What I Learned – Inside-Out 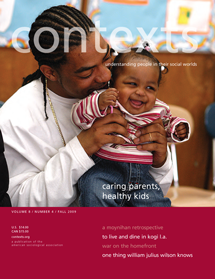 Just a quick note to point people to the student essay in the current issue of Contexts.  My student, Tasha Galardi, wrote about her experience and what she learned in our Inside-Out class this spring 2009.  Her observations about the inside students (inmates) and how they helped her come to a new understanding of sociological concepts and criminological theories is thoughtful and revealing.

Hope you can take the time to read it.  Please feel free to comment here – I’ll pass your notes along to Tasha.