hellhounds on the trail

we’re all pretty much running from something, right? a lot of marathoners seem to use distance running to stay a step ahead of substance use and other problems. runner’s world just profiled ultrarunner charlie engel, an ex-crack user who ran 4,500 miles through the sahara in 111 days. it takes major hellhounds on one’s trail to average 40 miles per day across a freaking desert.

the denver post similarly profiles the nonprofit activity inspired rehabilitation foundation, as they sponsored 40 first-time runners in the colorado colfax marathon. as a longtime distance runner, i take it on faith that marathons are good for the soul. i’ve thought about designing a randomized trial in which volunteers would be assigned to either a running support group or an alternative drug treatment comparison group, but i’m reluctant to test my faith — lest it be crushed against the rocks of a rigorous scientific analysis. nevertheless, i sent the AIR folks a donation and wish them all the best. from their site:

The AIR Foundation was founded in 2007 to help defeat homelessness and addiction in the community through programs that support and inspire rehabilitation through athletic accomplishment and a positive connection to the community. Its unique approach, called “activity inspired rehabilitation,” was an immediate success, increasing the success of rehabilitation programs by as much as 50%.

Today, The AIR Foundation works with homeless shelters, rehabilitation centers and youth outreach programs to provide a physical and goal setting component to rehabilitation. How does Activity Inspired Rehabilitation Work?

i’m doing a marathon in madison this sunday, so my personal goal for the week is simple, if contradictory: eat a ton of pasta and stay reasonably healthy. 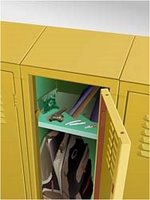 via school law blog: a three-judge panel of the u.s. court of appeals for the 8th circuit rejected a constitutional challenge to a federal law that bars students with drug convictions from participation in federal college aid programs. in students for sensible drug policy v. spellings the court ruled that such collateral consequences do not violate the double-jeopardy clause of the 5th amendment. 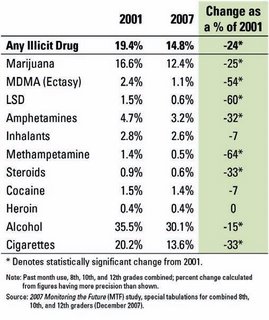 president bush released the 2008 national drug control strategy this weekend. the table at left uses data from the venerable monitoring the future study to establish a six-year decline in prevalence rates for the most common licit and illicit drugs.

i was a bit skeptical of this chart at first, since it only shows two years, the mtf only samples in-school youth, and it seems hinky to pool respondents in 8th, 10th, and 12th grade. nevertheless, the downward trend is real — especially since the peaks of the mid-1990s.

the most recent mtf press release indicates steep declines in marijuana, speed, and meth, alcohol, and cigarettes. drugs “holding steady” from 2006-2007 include powder and crack cocaine, lsd, heroin, ecstasy, steroids, and most of the prescription-type drugs such as oxycontin and vicodin. still, prevalence rates for these drugs were well off their earlier peaks as well.

one finding from the introduction to the national drug control strategy might be of interest to demographers: figure 4. baby boomers are carrying higher rates of drug use with them as they age. i can’t link directly to the figure, but here’s the accompanying text:

One of the more disturbing data trends identified in the past several years is a dramatic rise in current drug use among adults aged 50-54 (see Figure 4). This trend does not necessarily mean that people are taking up drug use as they enter middle age, but rather that a segment of the population that experienced high rates of drug use in their youth continue to carry high rates of use with them as they get older. While drug use is a burden that the baby boomer generation has borne into middle age, the generation coming of age today will benefit from comparatively lower rates of drug use for the rest of their lives.

this seems like a classic age/cohort/period illustration that might be useful in the classroom. when i report substance use data from the late-1970s and early-1980s, i now tell students that many drugs were more prevalent in their parents’ high schools in 1982 than in their own high schools in 2007. i sometimes have difficulty convincing the students of this, which is sort of sweet. when they do believe me, however, i advise them to repeat my lecture around the dinner table at a big family gathering — you know, like when grandma and grandpa are in the room. that way, both the kids and the elders can have a little fun with the baked-est generation.

courtney love has successfully completed rehab and probation and is now officially off-paper. judge rand rubin terminated ms. love’s probation early when she finished a substance abuse treatment program. according to reuters, ms. love entered guilty pleas in 2004 and 2005 to some [silly] drug charges and pleaded no contest to [scary] assault charges in 2005:

Love was accused of dousing King with a bottle of Johnnie Walker Red Label scotch, throwing a lit candle at her head and pinching her breast. The attack came after Love found King sleeping on a couch at the home of Love’s ex-boyfriend.

of course, this is no isolated incident. ms. love has had more than her share of legal problems over the years: juvenile and adult, criminal and civil, property and violent, trumped-up and let-off-easy. maybe i’ve got a soft spot for 42-year-olds named c-love, but i’m hoping this was her last pass through the criminal Justice system.