The FBI has released their Uniform Crime Report Crime in the United States numbers for year-end 2009 and, once again, the rate of crimes reported to police continues to fall. 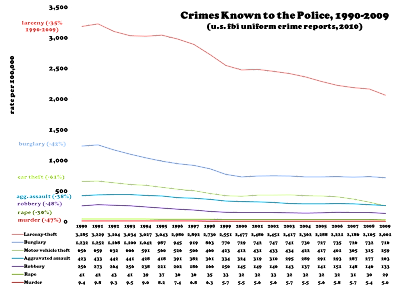 I’ve just begun to explore the new report, but researchers can easily download spreadsheets to show long- and short-term trends in both population-adjusted rates and raw numbers. The chart above shows the crime decline since 1990 in murder, rape, robbery, aggravated assault, motor vehicle theft, burglary, and larceny-theft. This chart makes it apparent how much the overall crime numbers are driven by larceny-theft — and the comparative rarity of violent crimes such as rape and murder. 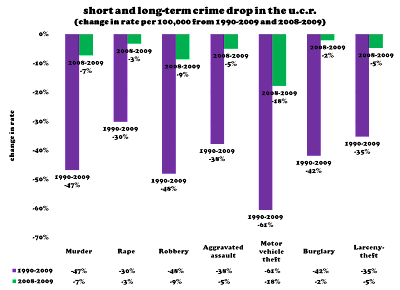 I’d normally compare these numbers with those from the National Crime Victimization Survey before drawing any big conclusions about crime trends. With regard to the FBI’s official crime index, however, it seems pretty clear that there has been a significant drop in crime reported to police over the past year and, for that matter, over the past twenty years.

reentry in black and white

Despite a new wave of programs and research, people still write about reentry using the stylized tropes of old James Cagney and Humphrey Bogart movies. Either the ex-prisoner is portrayed as a noble witness to this cruel world, as a predatory menace to be gunned down, or (in more sophisticated variants) as a gangster with a heart of gold.

Given these cultural reference points, it takes courage to say something real and true about the lived messiness of reentry — especially when one’s freedom or livelihood depends on telling convincing narratives of success. Josh Page tipped me off to a short piece by Jody Lewen of the Prison University Project, who describes the sort of reentry experience I see played out in my research and in everyday life.

In the latest issue of the PUP Newsletter, Dr. Lewin writes about a former client who hadn’t committed any major new crime but had nevertheless violated the conditions of his release.

Derek Meade had been an exceptional student while in the program at San Quentin, had enrolled in school immediately after paroling to continue his studies, and had also managed to find a part-time job. He had sounded great for quite a while. When he didn’t respond to one of our messages, we sent another, and he finally wrote to say that he had recently relapsed, and was close to being sent back to prison as the result of two positive drug tests. He said he hoped to send us the letter soon, with some better news.

Derek’s assumption was, of course, that his current news was “unfit” for the newsletter. It was as if he had absorbed the pressure we often feel to provide nothing but upbeat success stories and clear evidence of our “results.” And yet how many of our former students – or other people in recovery, for that matter – experience the same thing he was going through? What impact does it have on those individuals never to see their experiences reflected in publications about our programs? And equally important: how does this absence affect the public’s understanding of our work – whether in terms of the value of education for people in prison, or the role education can play in the process of recovery?

Of course, there are two layers of courage here. Unlike Mr. Meade, many clients will remain silent about their struggles and only share stories of unadulterated success or extreme hardship that justifies their actions. Unlike Dr. Lewin, many program directors will select and highlight only those narratives that celebrate the transformative power of their programs or justify a claim to greater resources. In challenging such biased and selective pictures, they give us a glimpse of what reentry is really like — and it is rarely as black and white as those old movies.

ps. If you’d like to support the Prison University Project, you can make a donation in any amount.