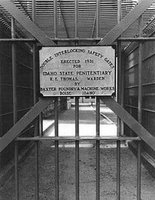 greg garland of the baltimore sun offers a nicely detailed report on recent changes in prison release practices in maryland:

Most inmates in the rural prisons in Western Maryland and on the Eastern Shore are from the Baltimore-Washington metro area. When an inmate’s sentence ends, he is given $50 in cash and dropped off at a bus station. Under the new policy, corrections officials say, inmates will be transported to a prison in Baltimore or one closer to their home community a day or so before discharge.
the change appears to be motivated, in part, by a desire to facilitate reintegration of prisoners in baltimore and, in part, to appease outstate political leaders. for example, the mayor of hagerstown doesn’t want any baltimore residents released into his community.
The Herald-Mail of Hagerstown recently published an opinion piece by the mayor, in which he responded to a letter to the editor an inmate had written on the issue of prisoner releases in Hagerstown. “The bottom line is this,” Mayor Bruchey wrote. “If you weren’t a resident of Hagerstown or Washington County before your incarceration, we definitely don’t want you as one when you are released.”
ouch. so, is there any evidence that former inmates from baltimore are responsible for a crime wave in hagerstown or elsewhere? not so much:
a study done by the department found only eight of the 622 inmates from other areas who were released from prisons near Hagerstown and Cumberland between January and June of this year remained in the area. The five prisons in those two communities house about 9,000 inmates. Six of the eight were working in jobs that they started before their release, and the other two have family in the area, corrections officials said.

not in my airport! 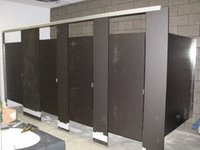 i felt woefully uninformed when i learned that senator larry craig (r-idaho) was picked up for lewd public restroom behavior at my airport. what’s all this about foot-tapping? and blocking the door with one’s luggage? this appears to be a well-choreographed old-school tearoom rather than an ill-timed individual act. there was apparently enough activity in this restroom to motivate the rather extensive sting operation that netted the distinguished senator.

highway rest stops i can understand, since locals can drive there with little cost. but isn’t the high-surveillance post-9/11 airport a strange place for anonymous hookups? i mean, the only folks who can regularly hang out in such restrooms are airport employees (who do not appear to be a particularly randy bunch) and those with overpriced tickets and planes to catch. are there message boards where one posts invitations such as, “hey boys, i’ve got two hours between flights at MSP and i’m looking for a good time in a busy restroom. no liberals.” the social organization of the activity just doesn’t make sense to me, unless there is waaaaay more pent-up demand among weary business travelers than i’d imagined. maybe so, maybe so… 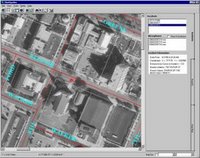 this week, we are welcoming a wonderful new cohort of graduate students to the department and our community. as a sociological criminologist, they sometimes ask me about the relative safety of various neighborhoods. usually they ask me such questions immediately after they have signed a long-term lease.

i can offer personal impressions, but generally prefer to back them up with some fresh public-use data. official crime reports, however, can be subject to biases in reporting, enforcement, or processing. one alternative data source is the ShotSpotter technology now used to track gunshots in minneapolis. when sensors detect the sound of gunfire, the system triangulates the location of the gunshot. the police department then plots the data and puts their weekly shots fired maps online, along with precinct-specific maps tracking violent crime and other crime. given the potential biases in other sources of crime data, and the common-if-not-universal aversion to neighborhood gunfire, the new gunshot maps might offer a useful tool for apartment hunters. just remember to look before you lease. 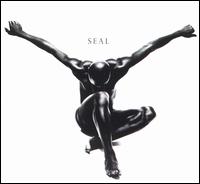 like many weary travelers, i mostly encounter usa today when it mysteriously washes up outside my hotel room door. today’s edition features a timely op-ed on the merits of sealing certain types of criminal records. the authors are stephen salzburg and margy love — co-chairs of the american bar association’s commission on effective criminal sanctions. the usa today editorial staff offers a prebuttal, arguing against sealing and expungement. 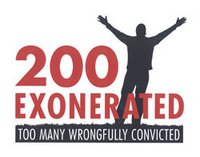 sure, imprisoning innocent people is not “ideal,” but isn’t the greater tragedy that we’re finding out about it?
– stephen colbert

with classes starting soon, crim instructors might be interested in showing a video clip of stephen colbert’s interview with jerry miller. mr. miller was the 200th person exonerated by the group mr. colbert calls “the murder huggers” at the innocence project.
the project put together a special report to commemorate their first 200 exonerations. among the summary statistics:

for related resources, you might check out the project’s youtube page for some good first-person accounts and the center on wrongful convictions at northwestern law.

*the exoneration total has now climbed to 205. 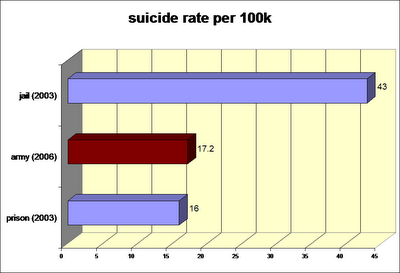 the record-high army suicide rate in 2006 is making big news today. how does the army rate of 17 per 100,000 compare with other groups of (mostly) young adults? suicide rates vary significantly by demographic group, with older white males most likely to kill themselves. let’s see, the active-duty army is about 86 percent male and 61 percent white. the jail population is about 87 percent male and 44 percent white, while the prison population is about 93 percent male and 35 percent white. i’ve plotted the suicide rates for each group for the most recent year available. army rates are currently at about the level of prison suicide rates, though both are far lower than jail rates. while the trend in prison and jail suicide is declining, however, army rates appear to be ascending rapidly.

prison as a sabbatical for CEOs

i’m not sure what to think about this article from conde nast’s portfolio.com. it basically offers a list of 10 recommendations for CEOs about to enter prison. at first i thought it might be a joke or at least meant to be read sarcastically, but given the authors’ affiliations, i don’t know…

provided as a public service by the st. paul pioneer press 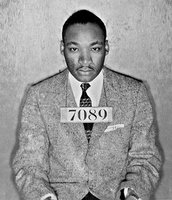 the st. paul pioneer press has developed a free searchable database for all ramsey county jail bookings. one can quickly and easily search by person, by date, or by offense category. it takes just a few seconds to pull up the full names and birth dates for, say, the 359 people booked for “no proof of insurance misdemeanors” or the 3 robert williams’ arrested since january 1, 2007.

as a ramsey county resident, i’ve gotta admit that i’ll be tempted to use these data. i could easily run a search of the older dudes playing in tor’s bands and i’d certainly want to check out esperanza’s future suitors. as a sociological criminologist, however, this sort of thing makes me very nervous. here’s a bit of background on the site and the potential problems it raises.

Individuals might be listed more than one time on the same date if they have multiple charges against them. Being listed here does not mean they have been charged in court with this offense…. Not all violations are listed here. In addition, inconsistencies in how the information is entered into the database may result in some arrests not be[ing] displayed.

while data on arrests and bookings are generally considered public information, i’m surprised the pi-press and the jail took it upon themselves to publicize this information. aside from the dubious quality of arrest data in most jurisdictions, many of these folks will never even be charged with crimes, much less convicted.

for example, the gentleman in the photo above was arrested and booked many times — for trespassing, loitering, disorderly conduct, traffic offenses, parading without a permit, and other heinous crimes. how do you think prospective landlords or employers will respond when such a long record fills their computer screens? most men in cities, myself included, have been arrested at some point. would the minnversity have hired me if someone in HR stumbled on my (juvenile) arrest record in an online search? and don’t think you have to live in st. paul to be arrested there. those campus kids planning protests of the 2008 republican national convention, for example, have a fightin’ chance of landing in this database as well.

nevertheless, my main problem with the search engine is that it stops with arrest. those landlords and employers would need to do a lot of due diligence to determine whether those arrests ever went anywhere. they won’t do it and i can hardly blame them, because the quick search gives them the only screen they think they’d ever need. 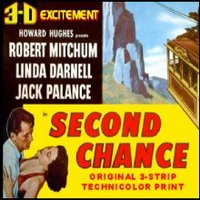 people have been asking me lately about the status of the “second chance act” for ex-felons. i confess to a bit of confusion. as i understand it, however, there are currently two “second chance acts” before congress.

representative danny davis’ (d-il) “second chance act of 2007” (hr 1593) would reauthorize the grant program for reentry of offenders into the community in the Omnibus Crime Control and Safe Streets Act of 1968, to improve reentry planning and implementation, and for other purposes. this bill would provide funds for reentry programming and research.
representative charles rangel’s (d-ny) “second second chance act” (hr 623) would permit expungement of records of certain nonviolent criminal offenses. expungement is a simple idea, but it has been extremely time- and resource-intensive in practice. hr 623 would make it easier for non-violent first offenders who have served their time to clear their names without expensive legal assistance. expungement would reinstate civil rights, expanding opportunities for housing, education, employment and voting.
i’m interested in both second chance acts as a citizen and as a researcher. what are their chances?