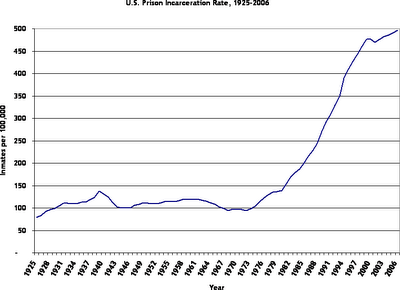 i’m more concerned with rates than numbers, so my figure above standardizes by population to show the long-term trend in prison incarceration. the 2006 rate was 497 per 100,000 u.s. residents, or 750 per 100,000 counting jail inmates. 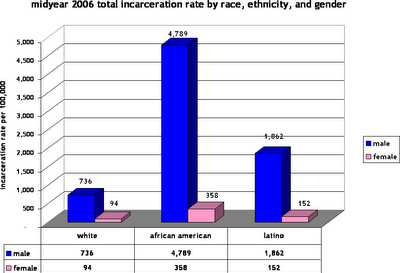 all the young dudes, carry the booze

epidemiologist traci toomey finds that young males are significantly more likely to respond favorably to such requests: 19 percent agreed to purchase the beer, relative to about 8 percent in the general population.

this is an intriguing finding, i suppose, and consistent with the general tendency toward greater delinquency among young men relative to other demographic groups. the study used 4 female research assistants and 1 male RA, however, so i’m a bit concerned that chivalry or some sort of ican’tbelievethiscutegirlisactuallytalkingtome phenomenon might have something to do with the propensity of young dudes to violate the law and respond favorably to the request.

i can’t imagine a scenario in which i’d buy booze for minors, partly because i’m afraid they’d drink themselves to death (well, i did see a bit of this while attending college in madison) and partly because i’d assumed one would be severely punished for such an offense. in case you’d consider making such purchases for your undergrads, here’s the formal deterrent:

St. Paul police spokesman Tom Walsh said they have charged individuals with providing alcohol to a minor, a gross misdemeanor carrying up to a year in jail and a $1,000 fine, for buying in such circumstances.

if someone taps you on the shoulder, just say no.

to die unsung would really bring you down 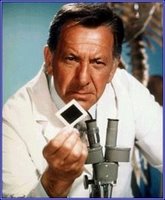 the bureau of Justice statistics just released a report with data from the first national census of medical examiners’ and coroners’ offices.

recordkeeping practices appear to vary greatly across jurisdictions, but the report lists a total of 13,486 unidentified human decedents currently on record — with more than one-fourth of the total in new york city alone. here are the top five offices, which account for about 54% of the unidentified human remains on record nationally:
New York NY 26.8%
Cleveland OH 16.2%
Los Angeles CA 5.9%
Houston TX 3.0%
San Bernardino CA 2.3%

a seattle high school has started a program called “dads in the halls” in which fathers, uncles, and male mentors are invited to spend a few hours in the school on designated days interacting with the students and teachers. as the seattle times reports, the program is designed to increase fathers’ participation in their kids’ lives at school and to also serve as role models for other students.

this seems like a good idea — low cost investment with real potential to let young people know that men in their community care about them. i know how lucky i was to have a new father come into my life when i was 13 and to have him totally accept me as his own. he has been a wonderful father and mentor and his love, support, and guidance have helped to shape who i am. i hope the “dads in the halls” program continues and grows and i hope today’s young people can receive the same kind of support and encouragement. 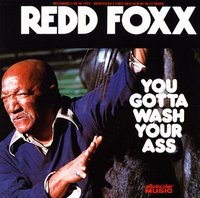 i personally discovered obscene recordings back in elementary school. a friend had somehow obtained comedy albums by cheech and chong, richard pryor, george carlin, and redd foxx on one of those “get 14 records for a penny!” record club promotions. the sexual references surely sailed over our heads, but we knew this stuff had to be funny and guffawed accordingly.

now i learn that obscene recordings have been with us since, well, any kind of recordings. yesterday’s npr’s weekend edition featured a new collection of lewd victorian-era recordings titled Actionable Offenses: Indecent Phonograph Recordings from the 1890s. the feature replayed clips from the original wax cylinders, showing that there’s nothing terribly novel about lewd, crude, and immature humor.

in light of the rapid pornographication of any new medium today, it really shouldn’t surprise us to learn that by the late-1890s one could hear, say, “The Whore’s Union” or “Dennis Reilly at Maggie Murphy’s Home after Nine O’Clock.” nevertheless, the clips are still a bit jarring to modern ears. they might not be funny” but they are certainly obscene, as evidenced by the bleeping necessary to get them on the airwaves in 2007.

i can imagine that this sort of phenomenon is old news to social historians, who could likely point out ancient (e.g., socrates’ whoopee cushion) or far nastier attempts at humor over the course of human history. i’m personally fascinated by the social control aspects of the story — some of the actors heard on the recordings were actually incarcerated — and will likely order the CD for my sociology of deviance class. i’m guessing that enforcement under the comstock act must have been somewhat effective at policing such vice, for precious few of these recordings exist today.

with schools closing up shop for the summer, the subject of curfews has drawn renewed attention in the local news. when high-profile crimes involving juvenile victims and perpetrators occur after midnight, of course, calls for enforcing the curfews intensify.

the chart above is taken from Juvenile Offenders and Victims: 2006 National Report, which shows the time of occurrence for the violent crimes of murder, sexual assault, robbery, aggravated assault, and simple assault. the data are taken from the National Incident-Based Reporting System for 2000-2001. curfews can be part of a useful strategy to reduce juvenile crime and victimization, though it almost looks as though curfews might be more effective among adults.

i didn’t even know the curfew rules in my hometown, so i looked them up this morning. esperanza, and anyone age 15 and younger, must be home by 10 p.m. tor, and others age 16-17, must be home by midnight in our town. regardless of the juvenile crime clock and the formal rules, however, i try to get my kids home as early as possible.

it would be a “grave miscarriage of Justice” for Mr. Wilson to be kept in prison for the remaining eight years of his sentence. “If this Court, or any court, cannot recognize the inJustice of what has occurred here, then our court system has lost sight of the goal our judicial system has always strived to accomplish: Justice being served in a fair and equal manner,” he wrote in the order granting release.

the state attorney general filed notice that his office would appeal, and genarlow wilson remains in prison, victorious but still behind bars, his life still on hold.

i’ve known female prisoners to take great pride in such work, particularly when their products are donated for a good cause. nevertheless, this is the first i’ve heard about male participants. one young st. cloud inmate explains the attraction:

it’s quiet, it’s mellow, and the stuff is donated to some people who need it.

hallelujah. and nobody’s stolen any scissors or needles yet, either. the registration-required site offers a fine slideshow with audio.

a life on hold

while all of the attention of late has been focused on paris hilton, her on-again, off-again, on-again jail sentence, and questions of celebrity Justice, there will be an important decision in genarlow wilson’s case on june 11th. the judge will decide whether to release him from prison.

his case has received extensive and thoughtful media coverage, but if you haven’t heard about it, here’s a summary from the website for his appeal:

Genarlow Wilson sits in prison despite being a good son, a good athlete and high school student with a 3.2 GPA. He never had any criminal trouble. On the day he was to sit for the SAT, at seventeen years old, his life changed forever. He was arrested. In Douglas County he was accused of inappropriate sexual acts at a News Year’s Eve party. A jury acquitted him of the allegation of Rape but convicted him of Aggravated Child Molestation for a voluntary act of oral sex with another teenager. He was 17, and she was 15.

Along with the label “child molester” which will require him throughout his life to be on a sexual offender registry, Genarlow received a sentence of eleven years — a mandatory 10 years in prison and 1 year on probation.

On July 1st, the new Romeo and Juliet law went into effect in Georgia for any other teen that engages in consensual sexual acts. That change in the law means that no teen prosecuted for consensual oral sex could receive more than a 12 months sentence or be required to register as a sex offender.

Had this law been in effect when Genarlow Wilson was arrested, or had been done after the Marcus Dixon case, Genarlow would not now be in jail.

Genarlow and his mother are overjoyed that no one else in Georgia will have to know their pain. In the meantime, however, the legal fight goes on for Genarlow Wilson.

Genarlow has been incarcerated since February 25, 2005.

let’s say that you don’t happen to share my affection for the fine art of concert flyers. how would you stop “rogue promoters” from papering the halls, walls, and buses of your fair city with gig posters? in glasgow, the city council cleverly started slapping CANCELLED stickers over the offending posters. the result?

… some rogue promoters … have been inundated with complaints from music fans.
People who have bought tickets to some of this summer’s big gigs have complained, thinking that an event, rather than the advert, had been cancelled.
The source said: “If people start phoning concert promoters complaining that they thought the gig had been cancelled, then the promoters have no-one but themselves to blame for having the posters put up in the first place.”

i give them 10 out 10 for style, 10 out of 10 for creativity, and maybe 3 out of 9 zillion for enforcement priorities. but dang that’s clever.