in an attempt at real public criminology, i wrote an essay that has just been published in the oregon humanities magazine. the oregon humanities magazine is published twice a year and each issue is built around a single theme. the theme of this issue is “domesticity,” and i wrote about how men serving life sentences (or very long sentences) build lives and find meaning for themselves in prison.

to be clear, i had a great deal of help from my inside/inmate students who contributed most of the main ideas, examples, and points, and from the editor, kathleen holt, who did some major editing to make the essay fit into a humanities magazine. 8-10 of my inside students voluntarily took the time to write a few paragraphs or pages on their thoughts about domesticity in prison, and they then trusted me to try to turn the information they provided into a coherent essay. i think everyone feels pretty good about the final result. i am especially pleased to expose a different audience to the articulate and thoughtful voices of my inside students. maybe it will help remind us all that real lives continue behind prison walls every day.

hating everything in prison

here’s a modern take on the pains of imprisonment from david, one of my inside students. this is an excerpt from a larger essay he wrote discussing classic sociological/criminological theory (including, in his case, durkheim, quinney, and marx) and his view of the purposes of punishment. the last part of the assignment asked for reflection on how well prisons fit the purpose(s) of punishment; here is his thoughtful and brutally honest response:

“…from the moment I rise, to the moment I rest, I feel punished. Even sleep is a task…I hate everything. I hate the bells at 5:15 am, the sound of my alarm, the bland colors, the lukewarm food, fluorescent lights, concrete floors, metal detectors, the low pay, the limited options, and “cooking” with 190 degree water. I hate the headphones, the monotony, the fences, the guards, the tours, the TV, the bunks, the spreads, I hate it all. I miss my parents, my job, my money, my home, my space, my clothes, my jewelry, the freeway, women, good food, baths, and more. [Prison] is a punishment sun-up to sun-up, 24-7-365. Every moment is horrible. The only thing that makes me smile is time, time is on my side. Every tick tock of the clock brings me closer to reprieve.” 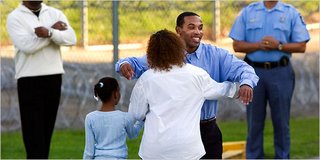 i wrote about genarlow wilson’s case a couple of times this year (here and here), and i’m happy to report that genarlow was released from prison yesterday. he served more than 2 years of the 10 year sentence he received for having consensual oral sex with a 15-year-old girl. he was 17 at the time. in a 4-3 ruling, the georgia supreme court said the sentence was “grossly disproportionate” to the crime and was cruel and unusual punishment.

before the incident, genarlow had never been in trouble with the law; he was a strong student, an athlete, and and homecoming king of his high school. now 21, he plans to go to college and major in sociology. state lawmakers announced that they have raised $4000 for a scholarship fund for wilson, and jesse jackson has promised another $5000. i hope the academic world welcomes him and he has an easy transition back into the community. welcome home, genarlow. 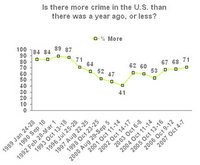 the gallup organization has released its annual crime poll. as of october 4-7, about 71 percent of americans believe that there is more crime in the u.s. today than there had been a year ago.

only about 51 percent believe that crime is up in their area or neighborhood, as people generally believe that the crime situation is better where they live than in the nation as a whole.

such questions usually elicit pessimistic responses, but perceptions over the past few years appear to be growing increasingly out of step with the best available victimization data (see below). gallup researchers offer several explanations, including the following: 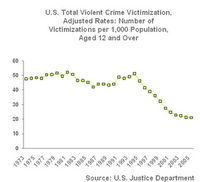 Americans’ pessimism about crime may reflect an overly negative interpretation on their part of the fact that the decline in crime has tapered off. It could possibly reflect a real increase in media attention to crime on the local and national news. Or it could reflect Americans’ broader dissatisfaction with the way things are going in the country, a sentiment that extends from ratings of President Bush and Congress to the economy, as well as to their satisfaction with the direction of the country more generally.

we couldn’t let such a nice prison burn down

i’ve heard many stories about the pro-social behavior of prisoners, but here’s a fine example from norway, via jonathon tisdall in aftenposten:

We couldn’t let such a nice prison burn down,” Ronny Stenberg said after he and fellow inmates at Arendal Prison in Fyresdal chose to fight flames rather than run.

“I don’t dare think what would have happened if the prisoners themselves hadn’t discovered the fire and helped fight it,” prison guard Daniel Trollsås told newspaper Agderposten.

When firefighters arrived after about 40 minutes, a prisoner sleeping near the blaze had been pulled out to safety and the fire halted, with damage limited to only one barracks.

In appreciation of the effort, the prison threw a party last Wednesday after the blaze, with Trollsås buying cake and candy for everyone.

“I’ve done time in a closed prison, I wouldn’t wish that on anyone,” said Stenberg about the inmates’ decision to preserve their prison.

Fyresdal grants prisoners a high degree of personal responsibility, and this program gave the approximately 30 inmates little hesitation in staying to fight for their facility rather than going on the run when the fire broke out.

About 10-12 years ago prisoners took responsibility and saved my life when one of the inmates went completely berserk and tried to kill me. Now I have had another chance to experience that this prison is full of so many good and reasonable people that when things get dangerous, it is the prisoners that take charge,” Trollsås told Agderposten. 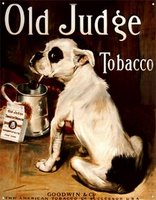 every presidential cycle, it seems we get more talk and hand-wringing about how this election will forever alter the composition of the u.s. supreme court. true, yes, but it ain’t necessarily so. what if we imposed term limits on those Justices?

npr’s Justice talking took up the issue of supreme court term limits this week. personally, i’m often more flummoxed by the opinions of the court’s junior members, but you might want to listen to jim lindgren’s proposal and read his case against “gerontocracy” in the judicial branch. an excerpt:

While mental incompetence was rare in the first century on the Court, since 1898 it has become a regular occurrence for Justices who serve more than 18 years; by one estimate about a third were mentally incompetent to serve before they finally retired.

yeesh. next thing you know, professor lindgren will be training his sights on tenured college professors and long-serving football coaches.

according to an associated press story, a pennsylvania woman was issued a disorderly conduct citation on thursday for shouting profanities at her overflowing toilet within earshot of a neighbor. ms. dawn herb of scranton could face up to 90 days in jail and a fine of up to $300.

“It doesn’t make any sense. I was in my house. It’s not like I was outside or drunk,” Herb told The Times-Tribune of Scranton. “The toilet was overflowing and leaking down into the kitchen and I was yelling (for my daughter) to get the mop.”

Herb doesn’t recall exactly what she said, but she admitted letting more than a few choice words fly near an open bathroom window Thursday night.

Her next-door neighbor, a city police officer who was off-duty at the time, asked her to keep it down, police said. When she continued, the officer called police.

this item paints the sort of sweet old-timey picture that awakens nostalgia for my ruby drive childhood. every springtime, when the neighbors would raise the windows, i’d learn all manner of creative cuss words. my neighbor, mr. ray, was a veritable pavarotti of profanity — renowned for the power and beauty of his tone, especially into the upper register. ralphie put it much better, of course:

He worked in profanity the way other artists might work in oils or clay. It was his true medium; a master. … In the heat of battle my father wove a tapestry of obscenities that as far as we know is still hanging in space over Lake Michigan.

so too with ms. herb, i’ll bet. don’t worry — the keen legal minds at volokh quickly rushed to her defense and she should get off scot-free. in this age of youtube and cellphone recordings, however, i’m sorely disappointed that nobody taped and posted said outburst online. now i’ll just have to imagine ms. herb as a character in my own flickering black-and-white sitcom — an enraged pg-rated alice kramden, ethel mertz, or weezie jefferson, brandishing a plunger and exchanging blustering oaths with mr. ray.

young lifers are making news again, this time in a piece by adam liptak in today’s times. the figure is taken from work by the equal Justice initiative, showing the number sentenced to life imprisonment without the possibility of parole for crimes committed when they were 13 or 14 years old. 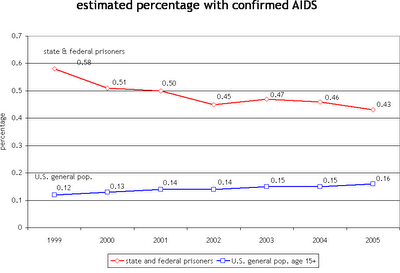 the bureau of Justice statistics recently issued hiv in prisons, a report by laura maruschak. according to the report, the trend for both hiv infection and confirmed aids cases is generally downward. in new york, for example, there were 7,000 hiv/aids cases reported in 1999, relative to 4,440 reported at year-end 2005. 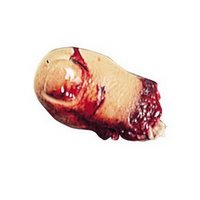 the swampadelic and impossibly-named graham wood drout has taken home hardware for the ghosts of mississippi, which i’m sort of agnostic about. that said, i’ll aver that his big toe is the best prison blues lyric in years.

especially when said lyric is combined with albert castiglia’s guitar work. dang. dude shreds nasty. filthy nasty. in fact, it hurts so much to hear him on my li’l youtube compuspeakers, that i’m making my way to oakland park, florida to put my head inside a 4X10 up in front of the stage. sweet.

scars on my ankles where these chains are hanging down
tired of draggin’ these chains all across the ground,
gonna take my shovel, cut off my big toe
if i can’t walk, i won’t have to work no more.