crime and black flight in detroit

The Wall Street Journal is reporting on “black flight” from Detroit, or the out-migration of “taxpaying, middle-class professionals who invest in local real estate, work and play downtown, and make their home” in the central city:

By some estimates, this year’s Census will show a population drop of 150,000 people from the 951,000 people who lived within city limits in 2000. That would be roughly double the population loss in the 1990s, when black, middle-class flight began replacing white flight as the prevailing dynamic. There are other signs the middle class is throwing in the towel. From 1999 to 2008, median household income in Detroit dropped nearly 25% to $28,730, after growing 17% in the 1990s, according to Data Driven Detroit, a nonprofit that analyzes Census data for the city. Over that period, the proportion of owner-occupied homes fell to 39% from 49%, while the proportion of vacant homes nearly tripled to 28%.

The Journal identifies serious and persistent crime problems as driving the trend. Motown’s violent crime rate has generally fallen since the 1980s and declined again by about 2% between 2008 and 2009. Nevertheless, Detroit remains a relatively dangerous city, with crime problems likely exacerbated by the residential instability brought on by the housing crisis. Although cross-city comparisons can be misleading (mostly because jurisdictional boundaries and denominators vary so greatly), the violent crime rate was about 75% higher in Detroit than in Minneapolis in 2009. Moreover, Gallup polls consistently show that Detroit is perceived as a dangerous city: 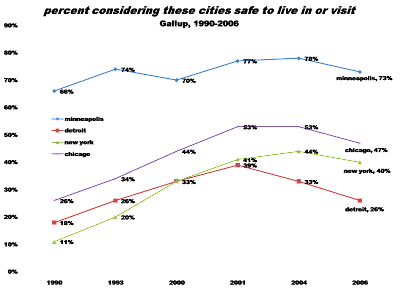 As the graph shows, Americans have long viewed Detroit as a dangerous city, with only 18% viewing Detroit as a safe place to live or visit in 1990. This perception improved as crime declined in the 1990s, but had fallen back sharply by 2006. Perceived safety improved much more rapidly for cities such as New York and Chicago, such that these cities are now viewed as significantly safer than Detroit. I couldn’t find any data beyond 2006, but I suspect these trends in perceived safety have continued.

My sense is that flight from Detroit, both black and white, is driven partly by these perceptions and partly by the lived reality of crime in Detroit neighborhoods. I poked around the Detroit Police Department site tonight, looking for some reassuring long-term trend data. I found few statistics of any kind there, though I did discover the department’s youtube channel. I’m sure the video below was well-intended, but such chilling safety tips will do little to reassure residents or change perceptions about the city’s safety.

And the award for timeliest social science research goes to… Tim Wadsworth of UC Boulder. In the wake of Arizona’s passage of SB1070, the toughest state ban on illegal immigration to date, Wadsworth’s research finds that cities with the largest increases in immigrants from 1990-2000 experienced the largest reductions in violent crime. Wadsworth tests an earlier argument made in Contexts (and elsewhere) by Rob Sampson of Harvard. The possible explanations for the ‘more immigrants and less crime’ connection are intriguing — the US may benefit as those with strong work ethics and perseverance select into this country, immigrants tend to move into disadvantaged neighborhoods and prevent them from becoming worse, and immigrants bring with them values that lead to more neighborhood cohesion and less crime. Work in this area is hampered by significant data problems, especially with respect to illegal immigrants (who don’t tend to volunteer their status and are difficult to find) but Sampson and Wadsworth’s findings certainly challenge the prevailing notion that ‘immigrant’ and ‘criminal’ are roles that often/usually/typically go together.

The scholarly research can be found here (gated) and the Newsweek article is here.