Notes on a Vigil

“Are you for or against?” the correctional officer asked me at the gate.

“Against,” I responded. I had driven nearly two hours through the Georgia countryside to attend a vigil at Georgia State Diagnostic and Classification Prison near Jackson, where the state’s male death row inmates are housed. The state planned to execute Warren Lee Hill at 7:00pm that night. The significance was not lost on me as I drove past beautiful, columned antebellum homes along Georgia’s “Antebellum Trail” (a series of towns spared by General Sherman’s torches in 1864), on my way to a vigil protesting the state’s execution of an intellectually disabled black man.

The officer looked at my driver’s license, wrote down my name and my license plate number on a notepad and directed me to turn left into a red clay dirt patch where other cars were parked. The road straight ahead, leading to the prison facility, was dotted with orange road barriers. As I turned off the main road and in to the makeshift parking area, several more officers dressed in full riot gear directed me with flashlights to a parking spot underneath tall pine trees. The officers instructed me to take everything I needed from my car because I would not be allowed back in after the drug-sniffing dogs had been through it.

I’d never attended a death penalty vigil before, much less one held outside the prison where the execution would take place. I’d visited youth and adult prisons many times in my professional life before grad school and while conducting research, so the rigors of security were not new. A few particulars were markedly different, though. I’d never had drug-sniffing dogs run around and through my vehicle before. Fine looking canines that they were, I held my breath as one seemed to linger a while in my front seat. The correctional officers were courteous at every turn, taking a bit of the edge off the feeling of violation inherent in such scrutiny of myself and my belongings. It was clear to me that had done this before; in fact they had just a few weeks prior at Georgia’s first execution in 2015.

Once the dogs were done with my car I was free to join my fellow vigil-holders in our designated corral. And by corral I mean a semi-grassy area roped off with a picnic table holding a cooler of water provided by the prison in the center. I was grateful to see a biffy nearby, just in case the wait was long. There, people were gathered, chatting and waiting with signs bearing slogans such as “Not in my name” and “Yes, there are alternatives to the death penalty.” A correctional officer stood at the entrance to the corral to monitor our comings and goings. There was a second corral available nearby for anyone “for” the execution. No one stood there that night, though I was told that the previous execution had a solid showing of police officers; the executed man – Andrew Brannan, a Vietnam veteran who claimed to suffer from PTSD – was convicted of killing a sheriff’s deputy in 1998.

We were far enough away from the prison itself that I was unable to see the building through the trees. Our only clue as to what was happening inside the facility would (eventually) come from vans driving down the road carrying witnesses and family members from the execution (to be followed later by the coroner’s van).

Soon after I arrived, we were briefly ushered out of the corral to stand for pictures for the media. A few of my fellow protesters stayed to give comments. Clearly not the occasion for a smile, I stood awkwardly, at the back of the group, channeling as best I could my stoic ancestors’ smile-free family photos (fortunately, the photo featured here excludes me).

As 7:00pm arrived, the vigil organizers – many were affiliated with Episcopal or Catholic churches (clerical collars were in abundance) – invited us all to join in a time of prayer and reading the names of those previously put to death.  A representative from Georgians for Alternatives to the Death Penalty informed us that the Supreme Court had just declined to intervene on Lee’s behalf, leaving no further obstacles to the execution.

We stood in a circle, at points holding hands. Prayers were said – including the Lord’s Prayer. Although familiar from my Lutheran upbringing, saying the words in this particular context carried a different meaning (e.g. “forgive us our trespasses as we forgive those who trespass against us”).  I managed to choke out most of the words to “Amazing Grace,” our voices echoing off the pine trees surrounding our circle, the death house obscured from view but very present in mind.

As the group took turns reading the names of the people Georgia has executed since the death penalty was reinstated in 1976, I read names and dates of death for numbers 40-42:

After the formal vigil concluded, we stood in our corral, waiting. Although I had dressed relatively well for the chilly 30-degree January Georgia night, I stamped my feet periodically to keep the feeling in my toes.

At about 8:10pm, we spotted headlights from several white vans making their way down the road from the prison. Warren Lee Hill had been dead since 7:55pm.

One of the witnesses to the execution came over to the corral to describe how Mr. Hill had died – no final words, peaceful. A pastor from a local church spoke about his conversations with Mr. Hill, and his belief in Mr. Hill’s reform. A few minutes later, a correctional officer gently informed us it was time to go.

My reasons for attending the vigil were both personal and professional. I’ve never lived in a death penalty state before, so I went in part because I was curious. As a private citizen, I’m opposed to the death penalty on humanitarian and religious grounds. As a criminologist, I know that the practice is an ineffective deterrent to crime, arbitrarily applied, and racially biased (see also this graph); not to mention its financial costs and the inherent risk of putting innocent people to death. I approach the subject in my undergraduate criminology classes knowing that many of my students may be in favor of the death penalty, and I respect their personal opinions. But I never shy away from presenting them with the evidence provided by social science research regarding the death penalty’s lack of deterrent effect and its problematic implementation along racial lines.

As I write this, executions in Georgia are on hold pending an investigation into the drug cocktail the state uses to perform lethal injection. Just a month after Mr. Hill’s death, the state was set to execute its first woman since Lena Baker in 1945. Kelly Gissendaner’s execution was halted at the last minute on March 2nd when the drugs to be injected appeared “cloudy.” An additional execution scheduled for a week later was also postponed. This development obviously calls to mind the botched execution of Clayton Lockett in Oklahoma on April 29, 2014. Ms. Gissendaner has since filed a lawsuit against the Georgia Department of Corrections, citing cruel and unusual punishment brought on by the hours of fear and uncertainly prior to her execution’s postponement, as well as ongoing questions about Georgia’s ability to provide a humane death.

For more on the death penalty in the United States, listen to TSP’s Office Hours podcast with David Garland.

A good day on campus 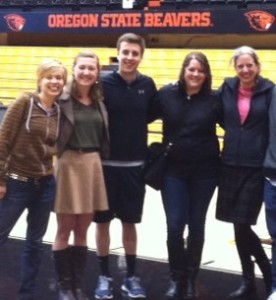 My Inside-Out students and I had the unique opportunity on Monday to welcome one of our inside students to the campus of Oregon State University.  E, the young man from the youth correctional facility, has been incarcerated for four years, and it was a very, very big deal for him to be able to come spend the day with us.

E is within a year of being released and he hopes to transfer his completed community college credits and attend OSU when he is free to do so.  E is on a high honor level at the youth facility, and he is one of the only youths to have permission to occasionally go outside of the fence.  Even so, he had to have special permission from two agencies to be allowed to visit OSU and two administrators/staff members from the facility accompanied him.

My wonderful outside OSU students were terrific hosts – meeting E and friends in the morning and giving him an insiders’ tour of the best parts of campus. Because E is a huge sports fan, in this photo we are standing on OSU’s basketball court in Gill Coliseum, and I have other pictures of us standing near home plate on OSU’s baseball field at Goss Stadium.  Unfortunately, because of agency rules, I can’t share any of the photos with E in them.  I’m in the pink sweater in this photo and E was on my left.  To my right are my lovely outside students, Emily, Claire, Jon, and Laura – I am happy to at least share this memory of the day and I was able to give all of the participants a copy of the full photo.

The staff members with E took him to lunch off campus so that he could decompress a bit.  I imagine he was completely overwhelmed by being on campus around so many unfamiliar people, sights, and sounds.  They came back in the afternoon to meet with a small group of OSU students for an hour, and then E, Laura, Jon, the staff members and I walked around campus giving away free chocolate chip cookies (that had been freshly baked in the youth correctional facility) and flyers with information on incarceration, the youth facility, and how OSU students and faculty might get involved.  It was a beautiful, sunny spring-like day, and we all had fun interacting with people on campus and giving out the cookies.  I should clarify that I didn’t really help, but I did eat 2 of the cookies, showing an implicit endorsement of the product.

It was a great day. We got to share a part of our lives with E, and I’m sure he went back to the youth facility and shared his experience with the other young men who were not allowed to go on this trip.  Perhaps it will make some of these incarcerated youth see that attending OSU or another college/university may be a viable option for them when they get out.  The administrators and staff at the youth facility and I hope that this will just be the first of many such visits to campus for youth from the facility over the coming years.  I send my OSU students into the facility as often as I can, and it was amazing to have one of our inside guys go the other direction and visit us at Oregon State University.  We all have a lot to learn from each other, and – working together – I really believe we can make our corner of the world a better place.