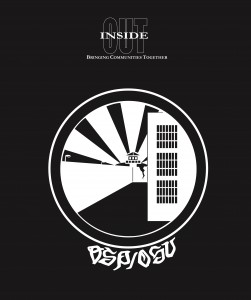 I’m teaching something like my 10th Inside-Out class in the Oregon State Penitentiary, and I am inspired anew by my students’ compassion and commitment to learning with and from each other.  Even more impressive, they are already taking the learning outside of the classroom and passing their knowledge on as widely as possible.  This quarter we are focused on issues concerning crime, prisons, communities, and prevention.  We are only three weeks into the quarter; we have shared just three classes within the prison.

I am writing this post to share an informative editorial written by Molly, one of the current outside students, and published in Oregon State University’s student newspaper, The Daily Barometer.  Molly does a great job of discussing difficult issues surrounding incarceration, punishment and communities clearly and convincingly.  Molly is a columnist for the paper, so I may be sharing more of her work throughout the quarter as the class continues.

There are more exciting projects in the works, including: a plan to visit our state representatives to talk about prisons and mandatory minimum sentencing, participation in a campus diversity summit representing the voices of incarcerated or formerly incarcerated students, and negotiations about a possible discussion of the class and the issues on public radio.

This is an extremely motivated group of students and they are already providing an important service as public criminologists.  It will be fun to see just how much we can accomplish this quarter.  Stay tuned. 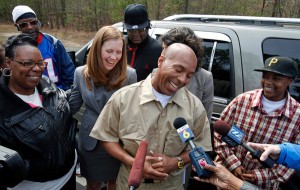 I read this story in the New York Times a couple of weeks ago; it has stayed on my mind even through the busy first weeks of classes in our fall quarter.  Thomas Haynesworth was mistakenly identified by a rape victim as her assailant, and – with no criminal history whatsoever – was arrested at age 18.  He was tried for committing four related rapes and assaults in the neighborhood.  He was convicted for three of those attacks and sentenced to 84 years in prison.  84 years.  Let’s just call it life.

Fast forward 27 years.  DNA evidence has now proved decisively that Haynesworth did NOT commit the rapes in two of the cases for which he was tried.  DNA in the other cases is not available.  With help from the Mid-Atlantic Innocence Project and the Innocence Project of New York, Haynesworth was released from prison on his 46th birthday.  He is, however, classified as a paroled sex offender and subject to the accompanying regulations – public registries, restricted movement, monitored telephone and email accounts.  Haynesworth is now fighting for exoneration.  While he is physically free of prison, a dark cloud still hangs over his name and his life.

It’s extraordinary enough to think of an innocent man serving 27 years in prison: imagine entering prison as a teenager and spending all of your twenties, all of your thirties, and half of your forties in a cage – the healthiest, most dynamic years of his life were stolen from him.  And the punishment continues with his classification as a sex offender and the public fear and revulsion that is attached to such labels.

Where the story gets even more interesting, in my opinion, is with the actions of the attorney general, Kenneth Cuccinelli.  Last year, local prosecutors came to Cuccinelli and told him they thought Haynesworth was innocent.  Cuccinelli conducted his own investigation into the 27-year old case and became convinced that the wrong man was in prison.  He then set out to make it right.

As the New York Times reports:

Now Mr. Haynesworth, 46, is asking for full exoneration on all of the rape convictions, although DNA from the other two cases is not available. But the circumstantial evidence supporting Mr. Haynesworth’s claims of innocence is so powerful that along with his own lawyers, the prosecutors from both jurisdictions where the rapes occurred support his efforts, as well as the attorney general for the commonwealth, Kenneth T. Cuccinelli…

Mr. Cuccinelli said in an interview that he and his staff reviewed the evidence in the Haynesworth case in great detail. “It was a complex decision,” he said, “but it wasn’t a hard decision.” The thought of the wrongful conviction haunted him. “It’s hard to describe how painful it is to me that somebody would suffer what he has.”

Cuccinelli has a reputation as a conservative figure, so his support for Haynesworth is perhaps even more surprising.  He argued in a Virginia appeals court that Haynesworth’s name should be cleared, and he went a significant step further by hiring Haynesworth to work in his office.  As reported in the Washington Post:  “Cuccinelli said he knew it would be tough for Haynesworth to get a job as a convicted felon. So the month after Haynesworth left prison, he put him on the state payroll.”

I’m really impressed with Cuccinelli’s actions in this case; he is a great example of “walking the talk” – truly examining the evidence and acting on what he believes is right.  Arguing for Haynesworth’s exoneration is already quite extraordinary; hiring Haynesworth to work in his office takes it to a whole new level.  Kudos, Mr. Cuccinelli.