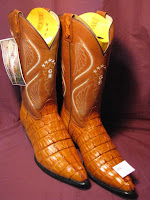 I like gear that comes with a story. And “these alligator boots were seized in a cocaine bust” is a story worthy of Quentin Tarantino, if not the Coen brothers. See, the proprietor of St. Paul’s El Primo Western Wear was evidently stashing cocaine in the boot boxes, so the store’s inventory was placed into storage. Now you and I can bid for the fine snap-button shirts, boots, belts, and stetson hats at auction.

via Mara Gottfried at The Pioneer Press:

A large amount of Western wear seized from a St. Paul store by police is now up for auction. The owner of the store, El Primo Western Wear, was sent to federal prison after he was convicted in a 2008 drug case. He had stored cocaine among cowboy-boot boxes in the basement of the store at 176 Cesar Chavez St., according to a search warrant affidavit.

The merchandise seized included 881 pairs of boots, 579 hats and 1,111 pairs of jeans. It had been in storage until the advisory board of the now-defunct Metro Gang Strike Force authorized the sale of the inventory at auction last month. Hines Auction Service is holding the online auction now. The first one closes Dec. 20 and the second Dec. 23. There will be more auctions, but they haven’t been scheduled yet, the Ellsworth, Wis., company said today. The auctions are listed at http://bit.ly/g2lf80 and http://bit.ly/hBHJ9N. Proceeds from the auction will be used to pay Metro Gang Strike Force legal fees, settlements, storage fees and other costs, an attorney has said.

Property seizures by law enforcement agencies are controversial to say the least, as forfeitures of cars and other big-ticket items have increased directly with budget cuts in some jurisdictions. For their part, Minnesota’s Metro Gang Strike Force has transitioned from beleaguered to defunct, finally shutting down in 2009. By most accounts, the MGSF was overzealous about seizing property and not nearly zealous enough about recordkeeping — hence, an auction to help defray their own legal fees.

Now that’s a story worthy of the Coen brothers.

[update: Jessica Lussenhop offers further details on both the bust and the goods in City Pages.]