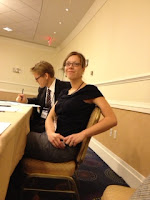 I arrived late and left early at this year’s criminology meetings, but the two days in Washington, DC were terrific. I’m always inspired by forward-looking talks that put a big issue on the table, especially those that could spark public discussion and, perhaps, intervention.

The paper that really turned my head this year was Bob Agnew’s general strain model of the impact of climate change on crime. Professor Agnew made a convincing and nicely documented case that climate change will “increase strain, reduce social control, weaken social support, foster beliefs favorable to crime, contribute to traits conducive to crime, increase opportunities for crime, and create social conflict.” After 15 minutes, he had me convinced that climate change could become a driving force of crime rates over the next century.

Sara Wakefield and Simon Cole offered a similarly future-directed and provocative talk on racial disparities in DNA databases. Every state is now collecting DNA — in many cases for arrestees, as well as those convicted of crimes. While acknowledging potential gains to public safety, the paper raised large and timely issues about how such data collection affects surveillance and inequality. We heard evidence about what the databases look like now, but everyone in the room expected them to grow dramatically in coming years.

I’ve worked a lot with Sara, of course, so I’m not exactly unbiased about her work — or that of other Minnesota grads at the meeting (including the program co-chair, Ryan King). This year, I gave talks with current grad students Suzy McElrath (above), Jessica Molina, and Heather McLaughlin (all attending their first ASC meeting), as well as Brianna Remster of Penn State. I mostly sat in the background scribbling (as above), while my collaborators did the heavy lifting.

My only solo presentation came at Madam’s Organ Blues Bar’s Thursday night Karaoke. Like the two papers above, my rendering of Sinatra could spark public discussion and, perhaps, intervention.