amidst new fears that u.s. crime rates are creeping up again, a great deal of evidence is accumulating to suggest that rates of rape and domestic violence are declining. a nice mclatchy-tribune piece reports the good news and offers some explanations for the drop.

the rake and homicide in minneapolis 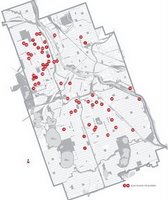 the rake’s frank clancy takes up the issue of homicide this month, profiling and mapping all 60 minneapolis murders of 2006.

the numbers show a steep drop since the 100 annual homicides of the murderapolis mid-1990s period. the 60 little stories, however, offer a less sanguine view of public safety in the city.

today’s eugene register-guard features a great front-page story on michelle inderbitzin’s inside-out prison exchange class. michelle brought 15 of her oregon state university students to join 15 oregon state penitentiary students for a course on crime, Justice, and public policy. michelle has been posting about the experience at publiccriminology throughout the quarter (including, for example, some memorable poetry from an inside student). yes, the start-up costs seem daunting — in terms of training, administration, permissions from deans and department chairs, travel, and security. for both inside students and outside students, however, i can’t imagine a more meaningful or powerful vehicle for teaching sociological criminology.

criminal anagrams from a hog-sprung heretic 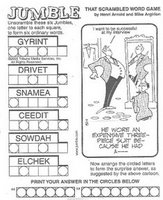 i enjoy playing with anagrams, rearranging my kids’ names to fit some aspect of their personalities. for example, tor stanley uggen has the same letters as both gentle guy on star and let’s not anger guy. yeah, that sounds about right.

it won’t surprise my students to learn that christopher uggen is actually code for hog-sprung heretic, and, given my minnesota biases, gopher guts enrich. wondering whether similar magic applies for the sociological criminologists i’ve been teaching in my delinquency class this year, i came up with the following variations without too much trouble. i’m self-censoring here, because some of the really funny ones seemed too cruel or unfair. i trust you can figure them out on your own, if so inclined.

let’s start with the classics. cesare lombroso whose criminal man connected primitive features with criminality in 1870, can be nicely anagramed into a slob score more. hmm. that rather nicely sums up atavistic theory, doesn’t it?

it is tougher to reconcile clifford shaw’s great work with his name. somehow scaffold whir or lads chow riff fail to capture the essence of social disorganization theory. how about my intellectual great grandfather, learning theorist edwin a. sutherland? it pains me to say so, but his critics might view he did learn, was nut or, more charitably, he did learn, aw nuts as all-too-appropriate alternative monikers.

speaking of professor sutherland’s critics, i couldn’t do much with social control theory’s travis hirschi (stir a rich shiv or chris ravish it) or anomie’s robert k. merton (torment broker and broken term rot are a little better). i had better luck with howard s. becker, who wrote a classic on marijuana use (saw herb rocked or sacred herb wok) and offered insightful critiques of mainstream sociology (bored whackers).

this week my students are reading meda chesney-lind on feminist criminology and juvenile Justice, so her new moniker (she demand nicely) might seem fitting. i couldn’t work the “q” into james q. wilson, but the brilliant conservative who wrote thinking about crime can otherwise be cruelly rearranged as jowls is mean.

ok, that’s where i draw the line. in fairness, i should also note that christopher uggen can be cruelly rearranged as pure hogs retching. though my personal anagrams can’t rival, say, mr. mojo risin’, i guess i’d prefer hog-sprung heretic to pure hogs retching.