images of felons and voting

As our friends at sociological images so ingeniously demonstrate, images send powerful messages. Here on pubcrim and in related articles, Michelle and I have argued that popular images of crime and justice often serve to widen the gap between public perceptions and the best available scientific evidence — and that evaluating and reframing these images is a central task for public criminology.

Since releasing a new Sentencing Project report last week with Sarah Shannon and Jeff Manza, I was reminded of the pervasiveness of certain stock images and the challenge of finding good alternatives. As I mentioned on the Ed’s Desk, the report presented some new numbers on the people affected by U.S. felon voting restrictions. Some outstanding articles have since appeared in a good range of print and broadcast outlets, including the New York Times and NPR. I’m always impressed by how quickly smart journalists can master a complex issue and then write an informed piece that really teaches readers about the subject. Of the articles that quoted me directly, I especially appreciated passages like this one, in Eliza Shapiro’s story in the Daily Beast:

Four million of the 5.85 million disenfranchised are currently out of prison, some on probation and parole. “The murderer behind bars,” waiting to cast his vote, “is an atypical case,” says Christopher Uggen, professor of sociology at the University of Minnesota and lead author of the Sentencing Project report.

Yes! That’s an angle that is too rarely mentioned in stories on felon voting. I’ve tried for years to convey how only a minority of disenfranchised felons are locked up — and that a much larger number are already living and working in our communities. The relative rarity of the “murderer behind bars” is both an evocative image and a demonstrable social fact, so I felt like I’d done my small bit for public criminology. Before I could dislocate my shoulder patting myself on the back , however, I noticed something else in the article.

The story was accompanied by the even more compelling Reed Saxon/AP photograph at left, showing faceless inmates in uniform lined up along a wall. Regardless of what I might’ve said about the “typical case,” I suspect that readers will call to mind a picture like this when they think of felon voting.  Having edited Contexts magazine and the Society Pages, I know how challenging it can be to illustrate such stories. Even if the typical disenfranchised felon is a fortyish white guy who has served his time, how do you tell his story in a way that will visually engage readers? Show a picture of Uggen watering his lawn? Not likely.

Well, in this case, the editors found many creative ways to illustrate the story. The Courier-Journal created a graphic to show the disenfranchisement rate among African American voters; the Huffington Post offered a woman casting a ballot in Mississippi; Tampa Bay Online used a woman passing a VOTE sign; the Crime Report showed a sign labeled POLLING STATION; and, the Times-Picayune used a head shot of a former inmate and activist. Still, many outlets relied on prison imagery: the National Journal offered a picture of hands sticking through prison bars; the Grio showed inmates with their hands up, being searched near a chain-link fence; and WTVR showed inmates’ feet walking along a yellow line.

There’s no right or wrong way to illustrate this story or any other, though I certainly have my preferences. Knowing how hard Sarah Shannon worked on our report’s maps, however, I was most happy to see the stories that reproduced them directly. 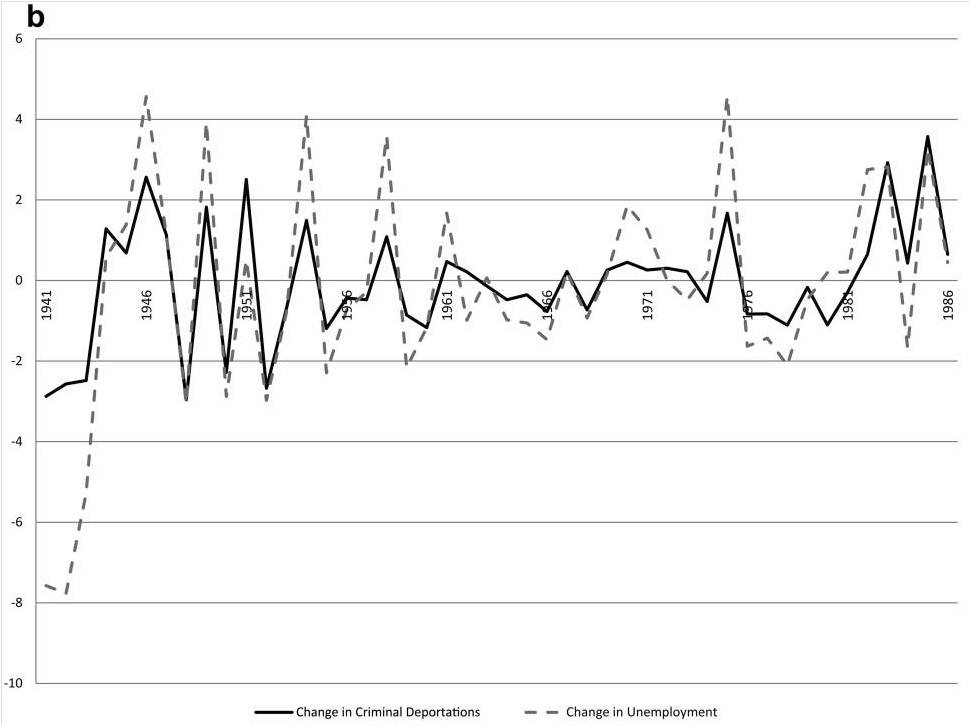 Some influential social theories predict a strong link between criminal punishment and unemployment rates, but the research usually paints a more complicated picture. The picture above, taken from a new article with Ryan King and Mike Massoglia, doesn’t seem so complicated by comparison. I won’t belabor all the details, but one basic idea was to ask whether the United States deported more people for criminal behavior when unemployment was on the rise. Sure enough, unemployment and criminal deportation tracked each other very closely from about 1941 to 1986 (since 1987, deportations have more closely tracked the steep rise in incarceration). The chart shows year-to-year changes in each measure, with the spikes in deportation (the solid line) corresponding to similar spikes in unemployment (the dashed line). Of course, no picture is that simple; there’s always a real danger that such correlations could be due to chance or to factors we failed to consider. At minimum, though, a picture like this could make it a little tougher to dismiss the old idea that punishment might have something to do with economic conditions.