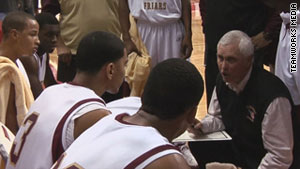 Nice story from the sports page: high school basketball coach, Bob Hurley Sr., is likely to earn his 1,000th victory in the next week.  He is one of only three high school coaches to make it into the Naismith Basketball Hall of Fame.

But, when Hurley measures his own success, he thinks of the young men that he has worked with over the years, helping to teach them discipline, trust, and teamwork.  He can point to the college graduates and successful adults who have come out of his program at St. Anthony, a tiny Catholic high school in Jersey City, New Jersey.  As the article explains:

But his true legacy is much deeper than the lights on the scoreboard. Hurley said he would trade in those wins — every last one of them — for a chance to help more inner-city kids.

Hurley can certainly be proud of his victories both on and off the court.  The article provides some testimony from former players and offers this overview:

Still, even with 25 state parochial titles, the victories are a small part of what he has accomplished. Hurley, 63, has been a father figure for hundreds of inner-city teenagers over the past four decades. He has placed nearly all of them in four-year colleges, most on scholarships.

Some are doctors and businessmen now. Others are lawyers and police captains. One owns a popular restaurant in Jersey City and once held a seat on the city’s board of education.

Maybe there should be a mentoring hall of fame, as well; I think Hurley would make it in on the first ballot.

In our paper on public criminologies, Chris and I wrote about some of the perils of making your research accessible to a wide audience:

We also should acknowledge the potential costs of practicing public criminology. Making one’s work and perspective visible in the media opens the possibilities for threats and hate mail, loss of credibility, or worse from detractors. It can lead to close identification with the populations one studies; for example, attempts to discuss the low recidivism rates of sex offenders can be derailed by venomous attacks from a fearful public. (Uggen & Inderbitzin, 2010: 743)

The latest – and perhaps scariest – example of vitriolic threats and electronic hate mail is the targeted attack against sociologist Frances Fox Piven.  Based largely on a piece of work that was published 45 years ago, Glenn Beck has suggested that Frances Fox Piven is an enemy of the Constitution. Examples of the threats made against Dr. Piven can be found in this article; the author then points out:  “One thing that I think has not been adequately highlighted amid this fiasco is Piven’s own response: the professor has been calm, fearless, and articulate, providing a model of how a public intellectual should behave in such a situation.”

Officers of the American Sociological Association issued a public statement, ending with these words:

Thus, the right to free speech does not ever include rhetoric that encourages violence against one’s opponents, especially in the current atmosphere of heated political mobilization. We call on Fox News and other responsible media to set the appropriate standards of accurate and honest debate.

Frances Fox Piven, herself, has been graceful under pressure, and as a true public intellectual, she is using this unwanted publicity to point attention back to the larger structural issues.  She offered this comment:

It’s hard for people to understand what’s going on in a complicated society. Democracy requires that people have some understanding of what’s going on, of what their own interests are, who their enemies are. But it’s a very complicated society. And moneyed propagandists have taken advantage of that to create a demonology in which it is the left, the Democratic left, that is the source of many of our troubles.

And, one more thing, in case you haven’t heard much about this case or followed any of the links in this post, Frances Fox Piven is 78 years old…and apparently more relevant than ever.  With her her courage and continuing efforts to educate the public, Dr. Piven offers a positive model for public sociologists/public criminologists to learn from and emulate.  It is appreciated.