Why Sex Offenders are Running for Office

The Minneapolis Star-Tribune reports that a group of “sex offenders” are registering to vote and plan to run for elected office. I put “sex offenders” in quotations because these voters and office-seekers are not currently under supervision for any crime. Instead, they are “civilly committed,” which means that they have either already completed their criminal sentences or, as is the case for over 50 clients, they were never charged as an adult for a sex offense. Although they are euphemistically called “clients” rather than prisoners, most will likely be locked away forever.

How can we continue to lock someone up after they have done their time? The state Department of Corrections generally reviews those convicted of sex crimes at the end of their sentences, referring those deemed dangerous to county attorneys, who may then file a petition for commitment with the district courts. Although civil commitment is rare in many places, Minnesota does this a lot — there are currently about 700 such clients in two secure facilities in the state. How many are released? The program has been in operation for over 20 years, but only 2 people have ever been provisionally discharged from the program.

In a federal class action lawsuit, U.S. District Court Judge Donovan Frank has raised serious questions about the program’s constitutionality. To date, however, the residents/inmates have received little hope or relief and the trial has been pushed back until next year. Given the hyper-stigma surrounding sex offending, few brave souls will act or advocate on behalf of the people in the program. So, they are doing their best to advocate for themselves and to work within what is increasingly acknowledged as a broken system — exercising their rights to vote and seek office.

While the article by Chris Serres and Glenn Howatt contains a wealth of information, they omitted one other factoid that speaks to the program’s sustainability: according to the state Department of Human Services, the per diem cost of the program is $341. This is approximately $125,000 per inmate per year, or roughly four times the cost of the $86 per diem at the state’s correctional facilities. As law professor Eric Janus once put it, “The option of doing nothing would not be responsible from either a legal or fiscal perspective.” 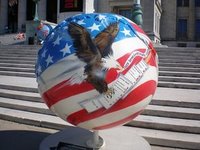 conor clarke and greg yothers offer a nice boston globe op-ed on felon voting — the more we imprison, the less we vote. here’s the bit i like:

[O]ur experience in class suggests that the opposite is true. We all write the same papers, read the same material by John Locke and Alexis de Tocqueville, and are all equally engaged in debating and discussing everything from the role of the good citizen to America’s role in the world. There is no reason to think inmates are uniquely unqualified to wield a vote, and no reason to think they can’t.

Yes, going to prison necessarily entails the loss of liberty. But the right to vote is in many ways more important than the right to walk freely down the street: Voting is the most basic check against the coercive power of the state. The places where that coercive power is most starkly exercised, such as prisons, are also the places where that most basic of checks becomes more important. The fact that prisoners have a big stake in governmental choices isn’t an argument in favor of disenfranchisement; it’s an argument against. 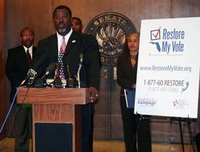 i got word from stacey gates and minnversity law graduate reginald mitchell (at left) today about the restore my vote project in florida.

under the leadership of republican governor charlie crist, florida has streamlined the process of voting rights restoration for some former felons. nevertheless, there remains great confusion over who is eligible for which clemency process and whether individuals are actually eligible to vote in upcoming elections. the people for the american way foundation therefore developed the restore my vote website and hotline to help former felons in florida determine whether they are among the 250,000 whose civil rights have been restored. the project also features an outreach component:

While the clemency board attempts to notify ex-offenders that their rights have been restored, election officials throughout the state are not making a concerted effort to add all persons back to the voter registration rolls. PFAWF is attempting to reach these eligible voters, let them know they have the right to vote, give them guidance on how to register, and work with election officials to support their re-enfranchisement. PFAWF is enlisting the help of the media, election officials, the general public, the religious community, and anyone else who can help us to find the people on this list and give them information about registering to vote.

confusion over rights restoration is by no means limited to florida (e.g., a minnesota commenter asked about his eligibility in the this blog today). i’m not sure that a national database is advisable, but i’d like to see every state make their basic eligibility criteria more easily accessible.