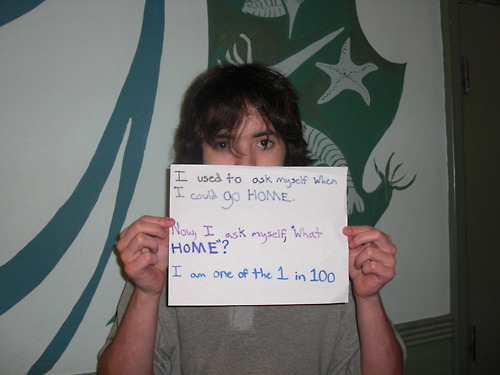 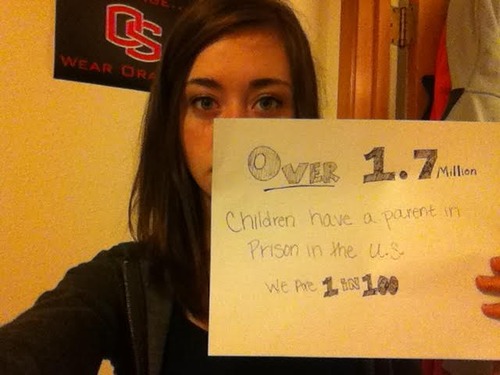 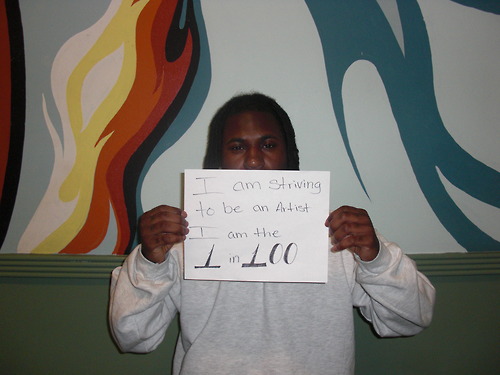 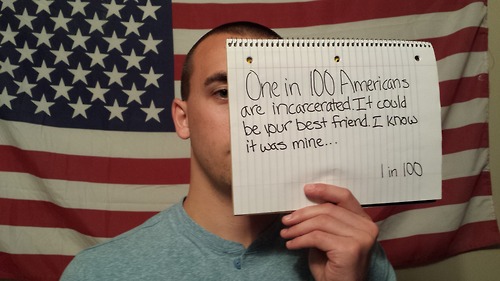 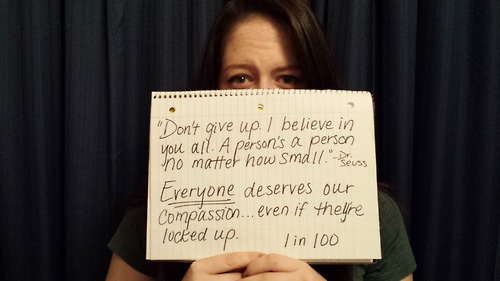 Representing the 1 in 100 Americans behind bars and those in the community who care about them and are affected by these incredible numbers, I ask my students in every Inside-Out course that I teach to share one key thought with the larger public.  I’ve shared photos from my previous Inside-Out classes on this Public Criminology blog, and will continue to do so as students put time and care into their messages.  This is the first time I’ve been able to put up photos of young men in the youth correctional facility.  I think the first photo here is all youth and vulnerability and this particular young man makes his case eloquently.  Please visit the We are the 1 in 100 tumblr site to see many more photos and sentiments of those inside and outside of correctional facilities.  I invite you also to submit your own photo.

Elliot Rodger and Violence Against Women 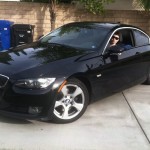 Shock, frustration, and rage. That’s our reaction to the hate-filled video record that Elliot Rodger left behind. The 22-year-old, believed to have killed 6 people in Santa Barbara last night, left behind a terrible internet trail.

I cannot and will not speculate about the “mind of the killer” in such cases, but I can offer a little perspective on the nature and social context of these acts. This sometimes entails showing how mass shootings (or school shootings) remain quite rare, or that crime rates have plummeted in the past 20 years. I won’t repeat those reassurances here, but will instead address the bald-faced misogyny and malice of the videos. It outrages us to see a person look into a camera and clearly state his hatred of women — and then, apparently, to make good on his dark promises. It also raises other awful questions. Are these sentiments generally held? If you scratch the surface, are there legions of others who would and could pursue “retribution” as Mr. Rodger did? Is serious violence against women on the rise?

Probably not. Rates of sexual violence in the United States, whether measured by arrest or victimization, have declined by over 50 percent over the last twenty years. As the figure shows, the rape and sexual assault victimization rate dropped  from over 4 per 1000 (age 12 and older) in 1993 to about 1.3 per 1000 in 2012.  And, if you add up all the intimate partner violence (including all rape, sexual assault, robbery, and aggravated assault committed by spouses, boyfriends, or girlfriends), the rate has dropped from almost 10 per 1000 in 1994 to 3.2 per 1000 in 2012. The numbers below include male victims, but the story remains quite consistent when the analysis is limited to female victims. 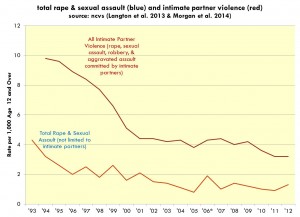 Of course, misogyny and violence against women remain enormous social problems — on our college campuses and in the larger society. Moreover, the data at our disposal are often problematic and the recent trend is far less impressive than the big drop from 1993 to 2000. All that said, “retribution” videos and PUA threads shouldn’t obscure a basic social fact:  22-year-olds today are significantly less violent than 22-year-olds a generation ago.

for more on masculinity and mass violence, see There’s Research on That! 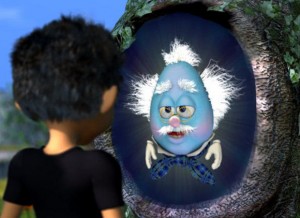 The Oregonian printed this story yesterday: “Charles Manson Family associate creates cartoon for kids who ask, ‘Why is my parent behind bars?'”  Bobby Beausoleil, now 66 years old and a prisoner in the Oregon State Penitentiary, created a video meant to help answer tough questions for children of incarcerated parents. The video can be watched on Youtube and is being distributed by Parenting Inside Out, a program that  helps to educate incarcerated individuals on parenting skills.

In the video, the little boy’s father is in jail; and the boy asks a professor – the blue head in the photo – questions about “bad guys.”  The Oregonian offers the following excerpt from the video:

“There are some people in the world who do bad things, son,” he says. “Sometimes a person will get scared or confused or get sick in their minds and forget who they are. People who lose their way sometimes forget what is right and wrong and why it is important to consider what is good for them and for other people. … When people forget this, they may do something that is bad.”

“Are they all in jail?” Jeeter asks.

“A lot of them are,” Professor Proponderus answers. “But not all of them.”

Jeeter eventually gets around to asking the eternal question: Is my dad bad?

“A great kid like you wouldn’t have a bad guy for a dad,” Professor Proponderus says. ” Most people are good, decent people at heart. Just because a person gets into trouble and goes to jail does not mean they are a bad person.”

Professor Proponderus tells Jeeter that people like his dad make mistakes and get “time outs” for them. The older and bigger you get, he tells young Jeeter, the bigger the consequences.

After watching the video, I’m not quite sure how I feel about it.  I think this project is well-intended, but I’m not sure it quite reaches its goal(s).  I would be very interested to know how children and those with an incarcerated family member react to it.   Is this a useful tool for tackling these kinds of tough questions?