higher education and police use of force 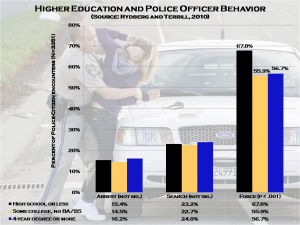 Frederick Melo at The Usual Suspects comments on the high rates of advanced degrees among police officers in Minnesota. He cites a bit of the criminological research literature on the effects of higher education, but didn’t mention a new paper in Police Quarterly by Jason Rydberg and William Terrill.

I won’t belabor the methods or Project on Policing Neighborhoods data source, but I graphed the main finding above: relative to less-educated officers, those with college experience are significantly less likely to use force in police-citizen encounters. About 56 percent of interactions with college-educated officers involved force, while about 68 percent of encounters with non-college-educated officers involved force. This relationship holds up (p < .001) in models that adjust for age, experience, suspect characteristics, and the setting of the encounter. In contrast to the use of force, defined here as “acts that threaten or inflect physical harm on citizens,” there appears to be no relationship between education and arrest or search behavior.

Even with a nice set of statistical controls, one could interpret these findings as the result of self-selection processes — that is, there might be something about the type of people who go to college (rather than the college experience itself) that results in less force by officers. Plus, force is difficult to measure and, if I’m interpreting them correctly, these levels look suspiciously high.

Nevertheless, the basic finding has now been replicated across a number of data sets and research settings. Why haven’t we required all officers to hold advanced degrees? The old arguments involve the desirability of recruiting less-educated former military personnel, while the new arguments involve the desirability of recruiting a less-educated but more diverse force. The enduring argument, I suppose, involves costs: if we require all officers to have a college degree, we might have to pay them more.

I originally wrote this as a comment on a post on solitary confinement over at co-author, Chris Uggen’s blog, but it sort of took on a life of its own as I reflected on my recent experience briefly visiting several different semi-isolated wings of a state prison, so I thought I would share those thoughts here.

It’s interesting to think about the varying levels of harm in different versions of solitary confinement.  I’m convinced that true isolation – such as some supermax prisons proudly proclaim – literally drives inhabitants crazy, but it’s less clear what effects shorter-term and semi-isolation may have on inmates.

I recently went into the isolated wings of a state prison for a research project and spent a very brief amount of time talking cell-front to men in the disciplinary segregation unit, the intensive management unit, and administrative segregation.

Although physically a more pleasant space with at least some natural light and prison bars on the doors rather than headache-causing metal-on-metal mesh, the administrative segregation unit is the one that sticks in my mind.  The men are there because – for various reasons – it is literally not safe for them to be out in the general population (it’s similar to the idea of protective custody).  They will likely spend their entire sentence in that wing; they probably will not have the opportunity to earn their way to general population with good behavior the way that those in IMU and DSU have.

The cells are double-bunked, share walls, and have somewhat open, barred fronts, so sound definitely travels.  My escort and I happened to be there at meal time, so the guys were eating their meals off of their prison trays in their cells, reminding me that they have almost no time out of their cells and virtually no contact with anyone other than those in that wing.

It’s probably impossible to fully understand the prison experience, and especially the varying harm caused by different levels of segregation/solitary confinement without having lived it, but that shouldn’t stop us from studying it and learning what we can.  It must be completely terrifying to spend your entire sentence in the relative isolation of administrative segregation and to then try to make it in the free world.

going green to be seen 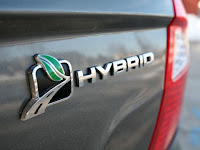 They’re doing some conversation-provoking social psychology in the Carlson School of Management these days — and I’m not just saying that because Heather and I are speaking there tomorrow. The latest “talker” is Vladas Griskevicius’ Going Green to Be Seen: Status, Reputation, and Conspicuous Conservation, forthcoming in Journal of Personality and Social Psychology. From the abstract:

So, status motives apparently lead people to forgo luxury for the environment only when such choices can be observed and influence one’s reputation. Hmm. I suppose an unscrupulous operator could profitably apply this research by purchasing replacement hybrid badges — the very icon of conspicuous conservation — and reselling them at a nice markup to the guilt-ridden drivers of gas-guzzling luxury vehicles. Sure ’nuff.