CNN’s Anderson Cooper has devoted several recent crime and punishment  reports to the pardons meted out by former Mississippi governor Haley Barbour. In several segments, Mr. Cooper seemed incredulous that convicted murderers were allowed to serve as “trustees” in the governor’s mansion prior to their release. In one report, for example, he and attorney Jeffrey Toobin dismissed Governor Barbour’s claim that murderers convicted of a single crime of passion were somehow better suited for such positions than inmates serving time for lesser offenses.

I will not comment here on the uses and abuses of the trustee (or “trusty”) system, except to note that the practice was once widespread but waned considerably after the prisoners’ rights revolution that began in the 1960s. Instead, I’m here to explain why Governor Barbour and his staff preferred employing convicted murderers rather than, say, convicted car thieves. 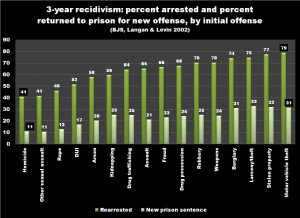 This doesn’t mean that a 20-year-old murderer is less dangerous than a 20-year-old car thief, of course. It just means that by the time we see fit to release people convicted of homicide, they are unlikely to pose a significant threat to public safety. Many have spent decades in prison and are much older than other inmates when they are finally freed. Convicted murderers make good candidates for pardons precisely because their sentences are soooo long relative to the risk that many of them pose at the tail-end of those sentences.

But aren’t those convicted of killing especially likely to kill again? I mean, a 10.8 percent recidivism rate would be awful if half of those offenses turned out to be new murders. Contrary to all we’ve learned from Quentin Tarantino movies, however, homicide offenders tend not to specialize in killing.

The chart below uses odds ratios to represent the degree of specialization among people convicted of various crimes. Here, the 1.4 for homicide is the ratio of the odds that a homicide offender will be rearrested for another homicide (that’s the numerator in the ratio) relative to the odds that prisoners released for other offenses will be arrested for a homicide (that’s the denominator). You can see some evidence of specialization among those convicted of motor vehicle theft, where the odds of rearrest  for a new auto theft are about 1.9 times greater than those for non-car thieves (2.9-1=1.9). There is an even greater degree of specialization for rape and other sexual offenses, with odds ratios of 4.2 and 5.9, respectively, corresponding to rates of new sex offenses that are 3-to-5 times higher than those for people convicted of non-sex crimes. For homicide, however, the odds ratio of 1.4 suggests comparatively little specialization. 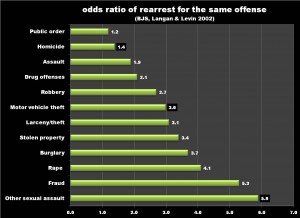 I might also add that a great proportion of homicides are “cleared” by arrest, relative to the other offenses on the list, so it doesn’t seem likely that rampant homicide recidivism is somehow going undetected by the system.

In short, there is much evidence that recidivism rates for people convicted of homicide tend to be particularly low. While it may be politically unpopular to pardon convicted murderers or to place them in positions of trust, they tend to do well when, at long last, they are afforded such opportunities.

Thought of this post while reading an article on a re-entry program for lifers over the age of 45: http://www.miller-mccune.com/culture/overcrowded-prisons-giving-old-inmates-new-life-39843/

Write more, thats all I have to say. Literally, it seems as though you relied on the video to make your point. You clearly know what youre talking about, why waste your intelligence on just posting videos to your weblog when you could be giving us something informative to read?

Appreciating the hard work you put into your blog and detailed information you offer. It’s good to come across a blog every once in a while that isn’t the same old rehashed information. Excellent read! I’ve saved your site and I’m adding your RSS feeds to my Google account.

Give thanks to you for sharing brilliant data. Your web-site is very fascinating. I am afraid of the information which you have on this internet site. It shows how beautifully you perceive this unique subject matter. Added this excellent website, will keep returning for extra content. You, my mate, Rock and roll! I came across precisely the info I presently explored everywhere and simply cannot come across. Such a ultimate blog.

I believe that furthermore this is very vital info for me personally. As well as i’m glad reading through your own short article. Nevertheless have to provide feedback within small amount of generic points, Coursesmart design is good, that web content is actually extremely good.