Zachary Hamilton and The Center for Court Innovation offer perhaps the most rigorous evaluation to date of the prisoner “reentry court” model championed by Jeremy Travis and others. The basic idea is to facilitate reintegration and protect public safety by giving some focused indivualized attention and intensive services during the critical period immediately after release.

More specifically, the Harlem Reentry Court “provides intensive judicial oversight, supervision and services to new parolees during the first six months following release from state prison. The goal of the program is to stabilize returning parolees in the initial phase of their reintegration by helping them to find jobs, secure housing, remain drug-free and assume familial and personal responsibilities.” 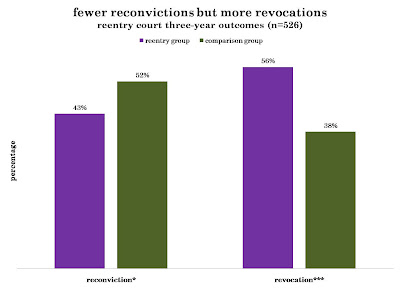 To criminologists, this may sound like low-caseload intensive supervised release programs — and results from the reentry court evaluation seem to mirror those of earlier ISP/ISR evaluations. The difference in the 3-year reconviction rate suggests that the reentry court significantly reduced new crime — from about 52% in the comparison group to 43% in the treatment group. Nevertheless, the greater attention given the treatment group likely led to their significantly higher revocation rate for technical violations of parole conditions (56% vs. 38%).

Like other forms of intensive supervision, the Harlem Parole Reentry Court probably observed violations in the treatment group that went unnoticed in the comparison group. However much reentry courts help clients adjust to life outside prison, the high rate of technical violations remains a stubborn problem in such programs.

You have to seen the online here all update of set alarm windows 10 many users got this app for batter work.