Matt McKinney offers a good analysis of the declining twin cities homicide rate in this morning’s Strib . I plotted the data for Minneapolis (purple, population = 390,000) and St. Paul (gold, population = 287,000) in the chart below. With two days left on the calendar, we’ve had 19 homicides in Minneapolis and 14 in St. Paul, a big drop since the murderapolis days of the mid-1990s. Since the population in both cities has grown a bit since 1980, these drops would look even steeper if I plotted them as rates.

The Minneapolis numbers are especially low — by my count, almost two standard deviations (sd = 16.2) below the 28-year mean of 50.4 homicides per year. The St. Paul numbers are about one standard deviation (sd = 5.8) below the 26-year mean of 20.0. Based on recent trends, I’d be (very pleasantly) surprised if the Minneapolis number dropped below 20 again next year.

In the twin cities, as elsewhere, homicide victims and offenders are disproportionately young African American men, so shifts in the homicide rate among this age/race/gender group sometimes have a big effect on the aggregate numbers. If I were to do any analysis of these data series, I’d start with a local breakout by age and weapon use.

The national gun homicide rate, shown in the bureau of justice statistics figures below, has fluctuated far more than the non-gun rate over the past 30 years — especially among young males. I’d guess (and it is only a guess) that gun homicides among males aged 14-24 must have declined to near zero in Minneapolis this year. I can speculate about why this would be the case (e.g., aggressive enforcement of weapons offenses and corresponding shifts in the social acceptability of gun-carrying by young men), but I’d best check the data before piling one speculation atop another speculation. 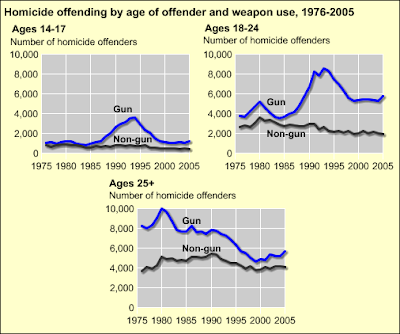