The Bureau of Justice Statistics just released Capital Punishment, 2008 — Statistical Tables. I’ve been interested in the graying of prison populations for some time, so I plotted the age at arrest and current age (as of 12/31/08) for U.S. inmates under sentence of death (from Table 7 of the report). 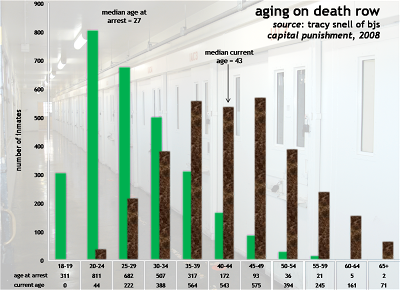 The tables, compiled by Tracy Snell, offer a wealth of mostly-depressing information about the men and (increasingly) women on death row. Sample factoid: as of last week, therre were already 11 more executions in 2009 (48) than in all of 2008 (37).

[...] Uggen, fellow sociologist and editor of Contexts magazine, put together a graphic for Public Criminology comparing the current age of death row inmates in the US with their age at arrest (in the title, I [...]

I hope you always make a new article for the robux free user support because your article is so supportive for us and we can easily we can.