8 million firearm background checks in the past 6 months

gun sales continue to rise, with april marking the sixth consecutive month of big increases in use of the fbi’s national instant background check system. since some attribute rising gun sales to fears of gun control, i wanted to know how much sales have risen since president obama was elected in november.

firearms sales are seasonal, typically peaking in december and bottoming out around may. since i was interested in the post-election period, i plotted sales from november to april of each year since the nics system came online. 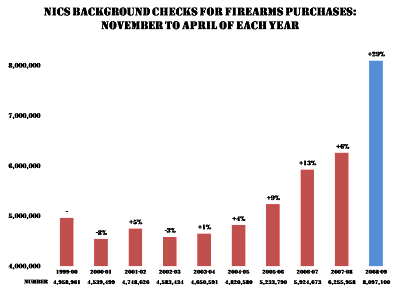 background checks are closely but imperfectly related to gun sales, since some checks never result in a purchase and others result in multiple purchases. nevertheless, the sheer number of nics checks is impressive, if not astounding. in a nation of 218 million adults, i count 8,097,100 background checks in the past six months alone.

how can that figure be correct? i know that not every check represents a single individual, but i’m still having trouble getting my head around the idea of 8 million in just 6 months. it would be as if every single adult resident of wyoming, vermont, north dakota, south dakota, alaska, delaware, montana, rhode island, hawaii, new hampshire, and maine all walked into bill’s gun shop to plunk down five hundred bucks for a glock 19. i wonder what the next six months will bring…

The jump really is perplexing.

I contacted the folks at FBI's office in West Virginia to see if there had been any systematic changes that would help explain the drastic increase. I was advised that their office does not "...gather or maintain definitive information to answer your questions with regard to office workload and any increase in states utilizing the NICS."

They also pointed to typical workload fluctations that occur annually--which does not seem relevant in this case.

In all, I did not learn anything from the contact that would help to explain your findings.

[...] Uggen, at our sibling Context blog Public Criminology, posted an interesting graph showing that background checks for gun sales during the period from [...]

That's a really big number! :x Almost scary, in fact. I know the gun shops around here are frighteningly empty. I recently bought a handgun (which is funny since I would have bought it a year ago during the Bush admin, except I got completely ripped off when that economic stimulus check came in. Apparently I has not been out of college long enough yet to deserve a full 600 -_- ) so I'm fairly certain not all of those are crazy Republicans scared of a liberal uprising (even though I'm sure that's ALOT of those sales). I don't know why everyone is so certain Obama is gonna negate the second amendment of the Constitution. I guess just because he's a "damned liberal."

The jump, in my opinion, reflects several things.

First, the fear that there will be another attempt to restrict firearms. So people buy. I know several first time buyers since the election...

Second, getting rid of the 2nd amendment is not easy. It is easier to raise taxes on guns and ammo until it is simply unaffordable. Restrictions can also be put in place on the number of firearms one can purchase (say 1 per month) as New Jersey had in legislation. Which also applied to gun stores. Can you imagine a gun store that could only buy/sell ONE firearm a month? How long would they stay in business.

Third, it shows a lack of trust in the government when sales increase.

Ammo manufacturers are running 24x7 with 4 shifts a day just to try and keep up with demand. Ammo is slowing coming back, but certain calibers are still very difficult to find. I see people (first timers) buying firearms simply based on the ammo they can find or are willing to wait 1-3 months for delivery of their firearm of choice.

For me, owning a firearm is having hands on the 2nd Amendment. It becomes very obvious when they want to take away your firearm because it has weight and you can hold it. But that is not the case for the 1st, 4th and other amendments that can be taken away slowly and you don't know until it's too late.

After talking with a avowed liberal, minority, gun owner, and CHL holding attorney over lunch, there is another reason to consider...

The supreme court found in 2005 that the police have no mandate under the constitution to protect citizens. Google it for the NY Times Article.

With the current economy, city and state tax revenue is down. As a result, there are layoffs of police and release of prisoners from jail (California a good example). So... from a personal responsibility, you are the first line of defense for you and your family's protection.

But it also comes to mind, that our President also noted during his campaign that we needed a civilian force that was as well armed and funded than our military (YouTube search for the video clip).

So, basically, we are all just getting ready to be 'called to duty...' (sarcasm)

From what it looks like, according to sales of firearms, it is pretty high, and this could be a serious matter for the government and FBI. I work in a nursing assignment help service, and I have there has been an armed robbery in a convenience near our office. It just triggered my curiosity, from where are these people getting all the arms. You just made it clear to me. I hope the FBI will be able to solve this ASAP.