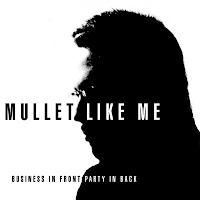 there was a righteous mullet at the theatre last weekend, which directed my attention to this minneapolis blogger:

In 1959 journalist John Howard Griffin darkened his skin for an undercover experiment with racial tensions that would later be published as ‘Black Like Me.’ Now, fifty years later, a man with markedly less courage takes on a mission with markedly lower stakes. mullet like me.

strange how a haircut can fall so far out of fashion that it becomes hip, then become such an icon of irony that it becomes painfully unhip. apart from being unfashionable today, a mullet also conveys something about working-class rural white masculinity. so, wearing it now provokes derision in middle-class urban spaces, much like stone-washed jeans. yet the local hipsters are sporting mullets today, in much the same way they affected foam trucker hats and grain belt premium a few years back.

that’s why mullet like me might be a bit too arch for a breaching experiment or sociology exercise. if a sociology student recorded the reactions to his mullet at the mall, karaoke night, and the high-end grocery store, any savvy bystander would quickly suss him out as an ironic hipster. he’d either blend into the background or get the half-smile of the half-amused.

there are, of course, men and women who can pull off a real unironic mullet with style. for example, jared allen of the vikings offers a 3-part code to living the life of the mullet:

1. In everything you do and wear, you must highlight your mullet.
2. Always respect another mullet — no matter where it’s at, a mullet always has the right of way.
3. Most importantly, sleeves are optional.

tor could really rock a mullet in his lanky preschool years, so i wouldn’t be surprised if he returns to form in college — a couple incisions in the mane and he’d be good to go.