usa today is reporting on a recent decline in the number of police officers killed in the line of duty. the data come from a new report by the national law enforcement officers memorial fund.

the site offered some intriguing state-by-state and historical data, as well as information about cause of death. i standardized the number of deaths by population and got the pattern below. 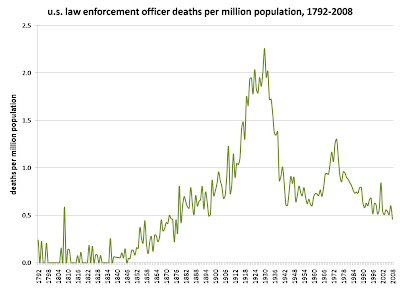 if the data on the site are complete, police officer deaths don’t seem to track crime or incarceration all that closely — not at all what i expected. instead, deaths rise steadily from the civil war to about WWI, then increase very sharply to a peak in 1930. officer deaths decline dramatically during the depression years, then bob around before another run-up in the late 1960s/early 1970s.

since then, police work has become much less deadly — today’s rate is about one-fourth as high as the 1930 peak. assuming i’ve got the right population numbers in the denominator, it looks as though officer fatalities haven’t been this low since 1879. given this pattern, i suspect that the story is tied to the automobile in some important way. perhaps more officers were killed in accidents as they left foot patrol for squads, with those squad cars gradually growing safer since the 1930s.

This is so sad news and i already read in a newspaper! I really appreciate our police who stop the criminals and martyred.
Vaping Supplies

Hello, and I read your article about financial wealth. It is very informative for us and shares unique stuff. I think financial intelligence plays a major role in the creation of financial wealth. I think it is a very great idea that we start with, always think positive in life.
Ketone diet menu plan

it is so much simple and decent but helpful. Your work is really good,,, I inspired very much from you...Nice and great post. I like your thoughts... Keep it up and thanks for the information... proprepandfulfillment

Thanks for this information. I am trying to understand what is law enforcement deaths.

Thanks for this information. I am trying to understand what is law enforcement deaths. Ohh Not got link. Thanks again :)