and you thought presidents bush and clinton were tough on crime 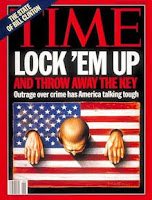 via talkleft and the national law journal:

the national law journal invited the major candidates to write about the legal issues facing the next administration. a portion of senator john mccain’s op-ed:
…Terrorists are not the only threat to public safety. Lax enforcement policies, judges who legislate from the bench and lack of support for law enforcement personnel all continue to force our innocent citizens behind the barred windows of their homes and allow criminals to roam free.

And now drugs are bringing waves of crime and organized gang activity to rural areas thought to be nearly immune from such problems. The federal government must both support state and local law enforcement and effectively enforce federal laws designed to root out violent crime, organized gangs and other interstate criminal activity.

let’s see … barred windows, criminals roaming free, organized crime waves, drugs and gangs infecting our countryside … where have you heard that before? right! this language might’ve been lifted from any of bill clinton’s (or ronald reagan’s or richard nixon’s…) old state of the union addresses. though i’m not at all complacent about public safety, i might point out that this is a time of comparatively low crime rates and record high incarceration rates. roaming free? we’re keeping prisoners so long that we’re building nursing homes behind the walls.

None of these law enforcement efforts will succeed without a judiciary that understands its proper role and its proper mission. Senator Obama would appoint liberal activist judges and supply them with greater sentencing discretion. I will appoint judges who will strictly interpret our Constitution. Senator Obama’s judges would coddle criminals. I will appoint judges who will hold criminals accountable.

this last strict constructionist bit has been a staple in republican platforms since the warren court. given the relatively unhealthy state of the economy, the crime situation looks pretty good by comparison. and, while senator mccain portrays his democratic rival as a coddler, lefties are criticizing senator obama for being too tough on crime. all of this suggests to me that voters won’t be basing their decisions on a tougher-than-thou debate on crime issues.