olde thieving cant for pupil-mongers, word-peckers, and knaves in grain 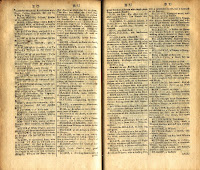 criminologists learn the secret argot of the underworld to enhance our understanding of the people and events we study. poets learn such street jargon because its imagery is often colorfully evocative and metaphorical, yet subtle or sly enough to facilitate secret communication.

boing directs us to a fine 1736 dictionary of thieving cant at fromoldbooks.com. in contrast to compilations by criminologists such as edwin sutherland, only about half the entries i read bore directly on the practice of crime. i should caution that many of the entries are offensive — most notably to women, but also to men, preachers, lawyers, and the irish and roma people. a few of the less-offensive entries:

ADAM TILER, the Comerade of a Pick pocket, who receives stollen Goods or Money, and scours off with them, Tip the coal to Adam Tiler; i.e. give the Money, Watch, &c. to a running Companion, that the Pick Pocket may have nothing found upon him, when he is apprehended.

ARCH-ROGUE, the Dimber-Damber Uprightman or Chief of a Gang; as Arch-Dell, or Arch-Doxy signifies the same Degree in Rank among the Female Canters and Gypsies.

ARK-RUFFIANS, Rogues, who in Conjunction with Watermen, &c. rob and sometimes murder on the Water; by picking a Quarrel with the Passenger and then plundering, stripping and throwing him or her over board, &c.

To BLOT the Skrip, and jark it, i.e. to stand engaged, or be bound for any Body.
It is all BOB, i.e. All is Safe.
CACKLING-FARTS, Eggs.

COSTARD, the Head. I’ll give ye a Knock on the Costard; I’ll hit ye a Blow on the Pate.

A HIGHTE-TITY, a Romp or rude Girl.

KNAVE in Grain, one of the First Rate.

MOVEABLES, Rings, Watches, Swords, and such Toys of Value.

PUPIL Mongers, Tutors at the Universities.

SCHOOL of Venus, a Bawdy-house.

SNUDGE, one that lurks under a Bed, to watch an Opportunity to rob the House.

SUCK, Wine or strong Drink. This is rum Suck; It is excellent Tipple. We’ll go and Suck our Faces; but if they toute us, we’ll take Rattle, and brush; Let’s go to drink and be merry; but if we be smelt by the People of the House, we must scowre off. He loves to Suck his Face; He delights in Drinking.

STROWLING-Morts, who, pretending to be Widows, often travel the Countries, making Laces upon Yews, Beggar’s-tape, &c. Are light-finger’d, subtle, hypocritical, cruel, and often dangerous to meet, especially when a Ruffler is with them.

SWIG-Men, carrying small Haberdashery-Wares about, pretending to sell them, to colour their Roguery. Fellows crying Old Shoes, Boots, or brooms; and thos pretending to buy Old Suits, Hats or Cloaks, are also called Swig-Men, and oftentimes, if an Opportunity offers, make all Fish that comes to Net.

THUMMIKINS, a Punishment (in Scotland) by hard squeezing or pressing of the Thumbs, to extort Confession, which stretches them prodigiously, and is very painful. In Camps, and on Board of Ships, lighted Matches are clapt between the Fingers to the same Intent.

To YAM, to eat heartily, to stuff lustily.