new from bjs: parents in prison and their minor children 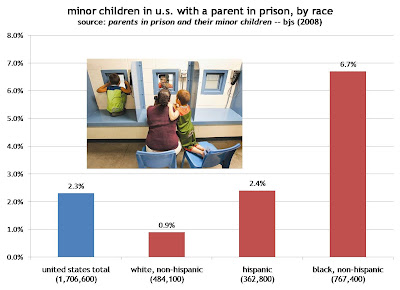 just released from the bureau of justice statistics:

Parents in Prison and Their Minor Children
Presents data from the 2004 Survey of Inmates in State and Federal Correctional Facilities about inmates who were parents and their minor children. This report compares estimates of the number of incarcerated parents and their children under the age of 18, by gender, age, race, and Hispanic origin in state and federal prisons in 1991, 1997, 1999, 2004, and 2007. It presents the total number of children who were minors at some time during their parent’s incarceration. The report describes selected background characteristics of parents in prisons, including marital status, citizenship, education, offense type, criminal history, employment, prior experiences of homelessness, drug and alcohol involvement, mental health, and physical and sexual abuse. It provides family background of inmate parents including household makeup, public assistance received by household, drug and alcohol use, and incarceration of family members. It includes information on the children’s daily care, financial support, current caregivers, and frequency and type of contact with incarcerated parents.