race, crime, and the scalabrine counterfactual 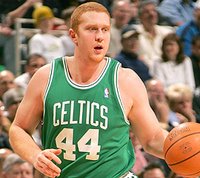 having just posted on an espn magazine article about perceptions of the n.b.a. as an urban league, i came across a similarly thought- provoking observation in the same issue. brian scalabrine of the celtics offers this li’l thought experiment on race and perceived criminality:

“I think the misperception of our league is definitely race-driven. Suppose that for a whole year, none of our players got into a fight, no one got arrested, no one got ticketed for speeding. Do you think the public would have a different opinion of the league? I bet not. But I do think public opinion would be completely different if 75% of the players in the NBA were white instead of black. And if our image problem is race-driven, we can’t control that.”

i’m not sure he’s correct, but mr. scalabrine’s argument is so well-stated that i might have to try it out on my delinquency class this semester. having read the quote, i just had to check out scalabrine.com to see where the young man went to school and whether he might’ve taken a good sociology course or two. sure enough, his bio notes that mr. scalabrine “earned his degree in social science from USC.”

I like this information. Thank you
poker deposit pulsa