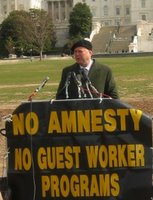 prison labor made an unlikely appearance in a times report on the immigration debates. u.s. representative dana rohrabacher* opposes any sort of guest worker program. mr. rohrabacher dismissed the arguments of president bush and business leaders about the nation’s low-wage labor shortage:

“Let the prisoners pick the fruits,” Mr. Rohrabacher said. “We can do it without bringing in millions of foreigners.”

as the orange county republican is well aware, there are plenty of prisoners in california. while there are few no-brainers on the complex immigration issue, reprising the convict-lease system is unlikely to solve california’s problems. if nothing else, we’d need a five-fold increase in incarceration to replace the labor of an estimated 11 million illegal immigrants. and, of course, collective amnesia about the abuses of prison labor in this country and elsewhere.

*judging by his age, voting record on defense appropriations, and the greenish beret in the picture, i expected to find a duke cunningham-like record of distinguished military service in mr. rohrabacher’s bio. nah, turns out he’s a tough-talking, no-nonsense surfer, with a master’s degree from usc in american studies.