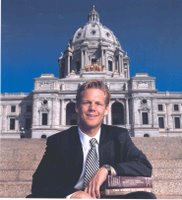 i testified at the minnesota senate elections committee today. the “voting rights for felons” bill passed and will be sent on to the full senate. of course, it must also find favor in the house and in the governor’s office to become law. nevertheless, today was a good start for proponents of reenfranchisement.

here are a few scattered observations:

1. a social scientist cannot really present research at such hearings. the legislators want a reasonable summary of descriptive information and basic findings. i’m pretty comfortable in such settings, but i had to reconsider and amend my presentation style to make an impact. asa-style or asc-style would not have been very convincing.

2. the initial version of the bill would have restored rights to both parolees (who have been in prison) and probationers (who are conditionally released in lieu of prison). senator john hottinger, the bill’s sponsor, likely felt that a probation-only bill would have better prospects and amended it accordingly. because minnesota makes great use of probation and sparing use of parole, the amended version would restore voting rights to the great majority of convicted felons in minnesota — approximately 40,000.

3. i waited about three hours and fifteen minutes before the bill was discussed. this helped me learn the procedural norms and behavioral expectations (though, given the delay, i wished i would have eaten lunch beforehand). for example, i learned to direct my remarks and responses to “mr. chair and committee members.” the rules were not much different than those i’ve encountered at faculty meetings. as in faculty meetings, i also learned that it was most effective to keep things brief and to make eye contact with the voters.

4. the testimony on other bills reminded me of the critical importance of basic “social facts” sociology. lawmakers are often hungry for simple descriptive information. even when they are not hungry, they still attempt to deal with the best evidence that is available to them.

5. elections law is a hot area in 2006. there wasn’t an empty chair and many spoke passionately about the right to vote from a great variety of perspectives. the bills addressed issues such as voter intimidation and dirty tricks, the voting rights act of 1965, accessibility for the hearing-impaired and those with other disabilities, free speech rights to display campaign signs in apartment windows, and rules for lobbyists and open meetings.

6. lobbyists wear more fashionable and expensive clothing than state senators. all males wore ties and jackets and i would have felt out of place if i hadn’t.

7. many people duck in and out of the hearings, often whispering to visitors or senators during the testimony on a bill. at one point, lawmakers left the room and hammered out some wording that built consensus on a bill.

8. i was astounded at the recitation of “dirty tricks” used in recent elections to restrict participation. i heard evidence that literature was distributed giving erroneous election dates, that people were threatened with “10 years in jail” if they attempted to vote when they or another family member had been in trouble with the law, that voters were systematically “challenged” simply because they had not replied to certified mail sent by political parties, and other systematic abuses of the system. not surprisingly given the history of voting rights in this country, african american speakers were most passionate and convincing. they argued that such tricks have occurred and that we need to take action to prevent them from occurring in minnesota. whites and others seemed almost agnostic about it.

9. i’m glad i live in a democracy and i feel privileged to be able to participate in some small way in the legislative process. some have compared lawmaking with sausagemaking, but i’m a true believer in the process. plus, i actually like chorizo sausage.

10. two former students were involved in the proceedings. i felt ancient when one told me that she took my class “10 years ago” but happy to hear that i “hadn’t changed much.”

fyi, the picture comes from an alumni magazine thing i did two or three years ago. the photographer fussed over it pretty good — lights and generators and assistants — so i’ll probably use it until i retire. as a st. paul kid, of course, it is kind of cool to be photographed on the state capitol. the books i’m holding are a con law reader (taken from don downs’ poli sci class at the wizversity) and keyssar’s terrific right to vote.