why criminologists should study rulemaking as well as rulebreaking 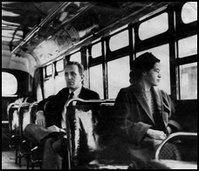 is law a narrowly crafted expression of societal consensus? or is it a product of group conflict and a tool for advantaged groups to maintain a dominant position? the answer depends on the law, of course, but criminologists too often accept the criminal code uncritically. once we scratch the surface of many laws, we find that they emerged from conflicts over race, class, religion and other social cleavages.

i told my deviance class that, by most definitions, rosa parks was a deviant in 1955 and a hero in 2005. she was arrested fifty years ago because she defied a law requiring blacks to yield their bus seats to whites, which set off the montgomery, alabama boycott. theconglomerate.org reprinted the text of the city ordinance defied by ms. parks.

Every person operating a bus line in the city shall provide equal but separate accommodations for white people and negroes on his buses, by requiring the employees in charge thereof to assign passengers seats on the vehicles under their charge in such manner as to separate the white people from the negroes, where there are both white and negroes on the same car; provided, however, that negro nurses having in charge white children or sick or infirm white persons, may be assigned seats among white people

i think i can make a pretty good case that this law emerged from conflict. the u.s. supreme court declared the ordinance unconstitutional in 1956, in violation of the due process and equal protection clauses of the fourteenth amendment. not everyone remembers that ms. parks was actually sitting in the black section of the bus. the driver “invited” her to move when a white man could not find a seat up front in the white section. her refusal brought her a disorderly conduct conviction and fine of $14. it seems strange that whites, so vigilant in policing segregation, would be comfortable sitting in the black section when convenient. segregation no doubt brings on all sorts of strangenesses.

for criminologists, such ordinances remind us yet again that the law is not a narrowly-crafted expression of consensual values. instead, many laws emerge from conflict and the naked exercise of power. moreover, laws that seem “normal” to us today will likely look out of place in a generation or two.