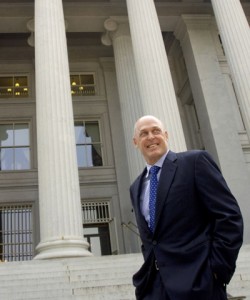 Make no mistake, all the available evidence suggests that the American political economy is headed for a major crash.  Some are even speculating that this is the end of American economic dominance in the world’s financial market.  But don’t be deceived by the blame-the-victim rationalizing that’s being floated now.   Let’s be clear about what policies and which people are behind the current financial crisis: neoliberal policies and the overwhelmingly majority of economically privileged white men (photo from same link) who created, implemented and benefited from those policies.

Neoliberalism refers to a set of policies that encourage “less government” and unfettered (and unregulated) capitalism.   The key elements of neoliberalism include: 1) the rule of the market, 2) reducing government expenditures on social services, 3) deregulation, 4) privatization, and 5) gutting the notion of “the public good.”    While this may strike some readers as sounding astonishingly similar to any recent Republican stump speech, neoliberalism has infected Democratic politics as well, and either Clinton’s policies (and way too many of Obama’s, for my tastes), fit neatly within the framework of neoliberalism.  Remember, “welfare reform” was a large part of what got Bill Clinton elected, and that’s a quintessential neoliberal policy.   Now, it seems self-evident to me what the connection is between neoliberalism and the current financial crisis, but allow me to connect a few of the dots here.   As those in the White House and Congress, including John McCain, touted the benefits of deregulation (link opens video of interview with McCain) of the financial markets and passed legislation “freeing” up those industries from any sort of government oversight, whole new markets developed and a few people got very, very rich.   Many of those who got very, very rich did so in financial services that are obtuse at best and an elaborate shell game at worse.   Others got very, very rich by targeting minority communities for subprime mortgages, the new version of “redlining.”  Now, those who conceived of, established and profited from these businesses have either cashed out or, if they’re still in the game, are looking to the U.S. tax-payers (some of the same people who’ve been fleeced by these schemes) for a $700 billion bailout, making the U.S. government the insurer-of-last-resort for these highly risky capitalist ventures.    The end result of neoliberal policies is that while a handful of people get very, very rich, these policies simultaneously exacerbate the suffering of just about everyone else and increase domestic and international instability.    So, what we’re seeing now is just the logical, perhaps inevitable, result of these policies.

Economically privileged white men have had a disproportionate level of involvement in the development, administration and profit from neoliberalism.  If you look at the roster of those in power on Wall Street and in the financial services sector more broadly in the U.S., what you will see is overwhelmingly white men who have gone to elite schools and, for the most part, come from upper-middle class and upper-class backgrounds.   Granted, there are token women (usually white) and people of color (some African American men), but these exceptions highlight the prevailing demographic fact about the industry.   While the “secret societies” of the wealthy occasionally make the news, the fact is, the power elite has been a feature of American life since before C. Wright Mills wrote about it in the 1950s, yet it rarely gets discussed in any meaningful way in the mainstream news. Instead, we get a lot of reporting about how the bailout failure was the result of partisanship – certainly part of the story, but doesn’t explain why conservative republicans and democrats rejected the plan.  Instead, what we need is more reporting, more information about how the state is working to protect the interests of the power elite.

Fortunately, critics on the left have pointed out the elite interests behind this crisis and the proposed bailout.   The reality is that bailout or not, the worsening economic landscape is not going to affect everyone in the U.S. – and the world – evenly.   Instead, people of color, women, and particularly women of color, are going to get laid off, not have health care, lose their homes and be forced into bankruptcy, while privileged white men may have to sell one of their vacation homes.  It’s time to shift this burden back onto the shoulders of the people who created it.