Racism (and other issues) among Gay Marriage Supporters 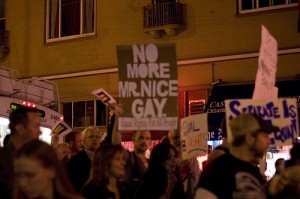 My joy at the news of last week’s presidential election was quickly deflated as I learned about the passage of Proposition 8 in California and a number of other anti-gay measures around the nation.   What’s particularly heartbreaking to me personally  (as a member of the LGBTQ community) is that alongside the legitimate anger this defeat has prompted (image of some of that anger from here), it’s also generated some racist name-calling in street protests as well as some much more measured and supposedly reasonable race-baiting by prominent white gay writers, like Dan Savage.

What writers like Savage and Andrew Sullivan and other relatively privileged white gay men fail to understand is that supposedly single-issue propositions, like Prop 8, are still embedded in larger systems of inequality that have to be at least partially addressed with voters in what we’re calling “the ground game” now.  Worse still, they are actively scapegoating black people for this defeat.   The defeat of Prop 8 and the other ballot measures last Tuesday at the same time that our first African American president succeeded, is clear evidence to me that gay marriage organizers failed at the ground game.    Let me break it down.

White LGBT folk need to learn about race and racism, especially their own. There’s just no excuse for rally-goers at a No on 8 rally dropping the N-bomb on black people, and the fact that these particular black people happened to also be gay and carrying “No on 8″ signs makes the whole thing even more absurd and inexcusable.   In addition to that kind of overt racism (which, I thought we were over and was a myth anyway, but I digress) is just part of what LGBT white folks need to educate themselves about.  While some prominent white queer people have denounced overt racism, they could also stand to learn a little about inclusion.   According to Daily Voice blogger Rod McCollum, there was not one black LGBT couple in any of the “no on 8″ ads.  Not one.

Beyond stopping overt racism, and learning about inclusion, white LGBT folk need to get much, much smarter about race.   For those just beginning to think about race in the marriage equality movement, let me recommend this Open Letter to White Activists by laura.fo is a good starting point (hat tip: Lizhenry via Twitter).  Included in her list are the following:

And, further down her list, “Stop assuming Black support.” To anyone that’s thought critically about race, there’s often a cringe-worthy quality to the rhetoric of the gay-marriage movement in the thoughtless appropriation of civil rights rhetoric while simultaneously assuming Black support and disparaging church folk (more about which, in a moment).  This is not a winning strategy.

The scapegoating of black people for the failure of Prop 8 assumes that black people are more homophobic than white people.   Terence, writing at Pam’s House Blend, has a long and incredibly insightful piece in which he argues that, in fact, blacks are more homophobic than whites because of a long history of having their own sexuality “queered” by the racial oppression of our society.    This is similar to an argument that Michael Eric Dyson makes (who is cited in the post) and an argument that Patricia Hill Collins makes in Black Sexual Politics.

Yet, such claims are flawed to the extent that they erase the lives of black and brown LGBT folk.    In a statement by Dean Spade and Craig Willse titled, “I Still Think Marriage is the Wrong Goal,” (hat tip Julie Netherland) the authors write about the move to blame black folks for the failure of Prop 8:

Current conversations about Prop 8 hide how the same-sex marriage battle has been part of a conservative gay politics that de-prioritizes people of color, poor people, trans people, women, immigrants, prisoners and people with disabilities. Why isn’t Prop 8′s passage framed as evidence of the mainstream gay agenda’s failure to ally with people of color on issues that are central to racial and economic justice in the US?”

I heartily agree with the authors’ re-frame of the failure of Prop 8.  The mainstream gay political movement has failed to do the hardwork of coalition building with people of color, whether straight or LGBT.  While I’m not prepared to argue that gay marriage is inherently racist as some do (download pdf), I do think the fight for marriage equality has got to re-think it’s white-led agenda and connect to broader social justice goals in order to be successful.

Class and gay marriage. When people in the marriage equality movement frame their struggle exclusively in terms of “rights and benefits,” they unconsciously adopt a class-based rhetoric that excludes many potential allies, including straight people across races and LGBT people across classes.   It’s hard to know how marriage equality “benefits” should resonate as an issue with poor and working-class straight or queer people who often work in jobs that have no benefits.  While it’s tragic and wrong when, for example, a terminally-ill lesbian cop in NJ is not able to give her partner the death benefits that she would receive if her partner had been a man, these are not the working-class images we typically see in the struggle for marriage equality. (Although, given NJ’s recent history with racial profiling by state police, one wonders about the wisdom of a cop as an example that’s supposed to a resonate for people of color who are the target of polic brutality.)   A more radical – and racially diverse – approach advocated by the organization Queers for Economic Justice includes an effort to expand the dialogue on marriage equality to make benefits available whether or not one is married.

Gender, race and “normal” families. Advocates for gay marriage need to check their gender politics.  For women who came to feminist consciousness in a certain era, marriage is and remains a repressive patriarchal institution based on the transfer of women-as-property. Hence, the battle to be “allowed in” to marriage is similar to the battle to be “allowed to” serve in the military, in which the ultimate prize of acceptance is a dubious goal.  Thus, it’s not surprising to see this movement as a largely (white)male-led movement.   Still, I’m enough of a sociologist to recognize that marriage is the primary way that our society recognizes people as adults, as citizens, and as human beings.  So, by denying an entire group of people the right to marry it really is denying them (us) a basic, fundamental human right.

But the movement for gay marriage, and indeed much of the scholarship on this issue, is framed in terms of assimilation and acceptance as “normal families” rather than in terms of human rights.  The “normal family” is a central feature of the white racial frame as in the “virtuous white Ozzie and Harriet family.”  This is an unfortunate strategy as it excludes the large number of the population that do not live in such an arrangement and the possibly larger number that have no desire to do so.

Still, this is a powerful narrative in our culture and it is has taken on a noticeably racial inflection at this moment.    The idealized image of the “normal” Obama family is part of what got Barack Obama elected.  And, indeed, the image of Barack and Michelle Obama and their daughters Malia and Sasha counters age-old racist stereotypes about negligent black fathers and irresponsible black mothers.   A recent article in The New York Times explicitly connects the success of the real-life Obama to the fictional “Huxtables” created by Bill Cosby (and indeed, The NYTimes article credits the show, at least in part, with Obama’s success).   This idealized family image of the Obama/Huxtable family is one that requires a particular heteronormative gender performance from all the participants.  After all, the Huxtables are variations on the “virtuous white Ozzie and Harriet family” of the white racial frame which was front and center in this election.  Any deviation from the Ozzie-and-Harriet model by the Obamas was severly punished (yet, the McCain’s numerous steps outside this went largely unremarked upon).   For example, Michelle Obama/Mom got in trouble for being too assertive,  Barack Obama/Dad was lauded when he attacked black men as irresponsible, and their daughters must dress and act appropriately “girl-like”  (hat tip to Joe for this insight).   What white gay marriage advocates seem to encourage looks and sounds a lot like assimilation into that heteronormative model of the family.  A movement that emphasized social justice and human rights would allow for and celebrate a range of expressions of gender and sexuality rather than conformity to a particularly narrow conceptualization of what constitutes a family. 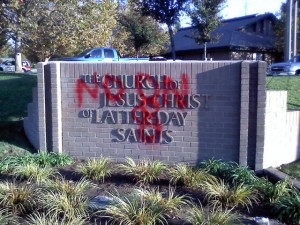 Religion, race and gay marriage. Advocates for gay marriage need to work on their religious intolerance (image from here.)  The Mormon church and others on the religious right funded the political campaign to take away marriage rights in California, following on a long history of religious-sponsored vicious hatred toward LGBT people.  Understandably, many LGBT people have no patience with religious arguments intended to undermine our rights.  Yet, for many people, including black people and LGBT folk, the church is the central social institution.  As Joe pointed out recently, most churches are still among the most racially segregated institutions we participate in.  Given the fact that marriage is both a religious rite (as well as a human right) that is being defended by religious people in racially-segregated congregations means that those interested in marriage equality need a ground game that engages, rather than alienates, church folk and does so with a real awareness of racial issues.  The “No on 8″ graffiti that appeared on several churches (as pictured above) following the defeat last week is not the way to win supporters.   The rhetoric of gay marriage supporters that polarizes “black churches” and all religious folks as diamterically opposed to “gay supporters of No on 8″ keeps both sides locked in a symbiotic relationship in which each side significantly affects the evolution of its counterpart, as Tina Fetner explains in her new book.   Such dichotomous, either/or, views of marriage equality ignore the fact that it’s religious LGBT folk who have been pioneers in the movement.

I agree with Jasmyne Cannick who writes that:

“Black gays are depending on their white counterparts to finally ‘get it.’  Until then, don’t expect to make any inroads any time soon in the black community on this issue — including with this black lesbian.”

And, for this anti-racist white lesbian, I’m not so interested in a marriage equality movement that fails to “get it” about race.  What gay marriage supporters must do if they hope to win on this issue is to address the deeply intertwined politics of race, class, gender and religion in ways that frame marriage equality as an important human rights issue that other people should care about rather than a luxury denied already privileged white gay men.

The post Racism (and other issues) among Gay Marriage Supporters appeared first on racismreview.com.