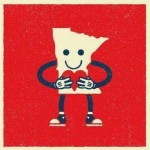 You might have heard that Minnesota Governor Dayton just signed Freedom to Marry legislation, but he also made Ban the Box the law-of-the-land-of-10,000-lakes.  Megan Boldt describes it succinctly at twincities.com:

Gov. Mark Dayton this week signed a bill that would ban employers from considering a job applicant’s criminal history until the applicant has an interview or is offered a job.

Supporters of the bill, dubbed “ban the box,” have argued the change allows people who have made mistakes to be considered for a job on their merits and skills, instead of having their application immediately discarded.

Since 2009, Minnesota has required all public employers to wait until a job candidate has been selected for an interview before inquiring about criminal history.

I can take no credit (or blame, I suppose) for this development, but I can brag a bit about amazing Minnesota graduate students like Sarah Walker and Rob Stewart, community leaders like Mark Haase at the Council on Crime and Justice, and many formerly incarcerated men and women who came forward to tell their stories and build support for this legislation.

Yes, employers can and will still discriminate on the basis of a criminal record, but the research literature suggests that ban the box is a tremendously important step. In my Minnesota audit study on low-level records, for example, 25% of the hiring authorities we interviewed told us they wouldn’t consider any (hypothetical) applicant with a record, but they were much less likely to discriminate on that basis when confronted with a real human being applying for a job. And in Devah Pager’s important audit studies (and my own as well), personal contact with a hiring authority is a powerful, powerful predictor of “callbacks” from employers. So, I’m optimistic that Ban the Box won’t simply waste applicants’ time — or that of employers.

For a national perspective on these laws, check the recent EEOC guidance on the topic and a useful page from the National Employment Law Project. And, yes, I’m already scheming to evaluate implementation and outcomes…

Great decision by Minnesota Governor . I appreciate him for this work.
In-house jobs

I hope you always support and develop your website. I will pray for your website to be more developed and more advanced in the future. never give up and keep the spirit. thank you
Poker Online

Daily millions of user here and join this site and i hope you can easy to played any time with out pay required Play Crossword Puzzle online how to play and control so that is very easy,now follow the tips.