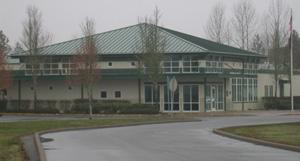 january will bring new challenges. i will be taking 8 or 9 oregon state university students (all female) into our state’s primary girls’ correctional facility to share class once a week with 8 female inmates. i’ve taught a number of inside-out classes with adult males in the maximum-security penitentiary, and my dissertation research was with violent males in an end-of-the-line juvenile facility, but working with young females will be a whole new experience.

i chose/volunteered to do this for many good reasons, and i am hopeful that we will have a positive outcome for all involved. this facility just reopened in february to house the majority of the females committed to close custody by the oregon youth authority. oya is planning to implement gender-specific programming in the facility, and i am hoping to build strong connections and to get my students involved from the beginning.

the latest news, however, is that eight girls in the facility assaulted and injured three staff members in a premeditated escape attempt. apparently, they staged a fake fight and then attacked the staff members with homemade weapons. the girls ranged in age from 13-17. all three male staff members needed medical attention; one had a head wound that required 32 staples to close it.

i’m not sure what to think of this. strange as it may sound, i feel completely safe in the maximum-security men’s prison, but somehow these teenage girls seem more volatile and more of a risk to work with. it may have something to do with the numbers. i have 15 students in the penitentiary at any given time out of approximately 2300 inmates. the girls’ facility only holds about 70, so to have eight involved in an aggressive escape attempt is to have more than 10% of the population plotting against the staff. i’ll have eight girls in my class, but my girls/young women will presumably be a different eight than those involved in the escape attempt, and it’s likely that most of them will be 18 or older (oregon youth authority can hold young people up to age 25).

it’s a lot to think about before our first class session in january. if anyone has any thoughts or advice for working with this population, i’d love to hear it.

i have no advice but you're not the first person i know to say this... a few people that i know working in corrections have made statements similar to this ("i don't like working with the girls"). there is probably a good research paper here.

the only person i have heard offer an explanation offered it in very gendered terms -- they said girls tend to get more emotionally-attached to officers and also tend to turn on officers in ways that are more personal relative to male inmates. i find this explanation problematic but it's an intriguing issue that i have heard raised numerous times before

thanks for the comment, sara. i'm intrigued and disturbed by the gender dynamic, as well, but i'm hoping to bring it to light in this class as we will have the opportunity to explicitly explore gender, crime, victimization, and corrections. of course, age is a big interaction in this case, too, since we'll be in a juvenile facility.

i hear the girls from the facility are excited about the class, so i'm looking forward to our first session on monday. i'm sure i'll write more about it as the quarter progresses...

[...] of the key figures in labeling theory, i should know better.  but, in my earlier post on “girl trouble” about starting classes in a correctional facility with teenage girls, i let the bad press [...]

This is the official blog for Changing Lives Through Literature, an alternative sentencing program based on sentencing criminal offenders to literature courses. I don't think they have much of a problem with violence in these courses, because they are small groups specifically selected for the program. But the idea of a classroom experience possibly impacting perspectives, and eventually, maybe the lives of individuals seems very relevant to what you are doing.

It has been nearly a year - I am curious, how did your experience turn out?
If you have any interest in sharing your experience with us at Changing LIves, Changing Minds - the link i shared above - we would love that! I believe that similar programs (and people facilitating important discussions) benefit from sharing experience. You mention "building connections" and I think that is at the heart of our program as well.

i have no advice but you’re not the first person i know to say this… a few people that i know working in corrections have made statements similar to this (“i don’t like working with the girls”). there is probably a good research paper here.
PIALA DUNIA 2018

Almost all the words of wisdom are based on human experience thousands of years ago and this is indeed true. Apart from experience, usually the word wise is also made by wise people so it can be accepted by the wider community

Be kind whenever possible. It's always possible.

Good advice is always certain to be ignored, but that's no reason not to give it

Love yourself instead of abusing yourself

When we remember we are all mad, the mysteries disappear and life stands explained

If you say that you never lied in life, then you are actually really lie

If you say that you never lied in life, then you are actually really lie..

The information is very special, I will have to follow you, the information you bring is very real, reflecting correctly and objectively, it is very useful for society to grow together. spanish dictionary