public criminology from the classroom 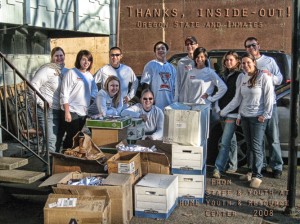 my inside-out class at the oregon state penitentiary this fall was an exercise in engaging in public criminology from the classroom. of course, i would argue that holding the class in a maximum-security prison already makes it a form of public criminology, but this quarter we took our efforts several steps further. along with reading two books, writing several essays, and getting to know students from the other side of the wall (inmates from the penitentiary and college students from oregon state university), the class developed a community service project and wrote letters to the editors of local newspapers.

the focus of the class was on delinquency prevention. i challenged the 31 students to work together to come up with group projects that they could implement in less than 10 weeks. it was a difficult process at times, but they ultimately did a great job. the most visible aspect of the project was a hygiene drive to collect new products (shampoo, toothbrushes, tooth paste, razors, deodorant, gloves, socks, etc.) for at risk and homeless teens. perhaps most impressive given their relative resources, inmates in the penitentiary donated nine boxes of new items they purchased at the prison canteen. we added more donations from prison staff, sociology faculty, and the osu football team; we also bought several more bags of products with money raised by the outside students. 10 of the outside students (in the photo) and i had a great time dropping off the donations at the HOME youth & resource center in salem.

along with the hygiene drive, students went through and painstakingly updated a resource guide for homeless teens. inmates from the class wrote anonymous letters to the at-risk youth, offering their stories and testimonials and encouraging the youth to make the best possible choices in their own lives. the class also created “truth and consequences” templates for table tents that offer facts about crime and sentencing, personal examples, and encouragement to young people; they sent the templates to local high schools in case they choose to use them in their lunchrooms.

finally, this sunday the salem statesman journal devoted most of the space on its opinion pages to our inside-out class, publishing an editorial about the class and our project; excerpts from eight inmates’ letters to the editor; and excerpts from four outside students’ letters to the editor. if you get a chance, check them out. you might be surprised what the guys inside have to add to a conversation about preventing delinquency or the impact of mandatory-minimum sentences.

all in all, i think it was a pretty successful quarter and a good example of bringing public criminology into — or, more accurately, out of — the classroom.

[...] new bottles of shampoo, toothbrushes, deodorant, razors, and socks from their own scarce supply.  As I wrote about in an earlier post,  we were able to deliver more than a dozen boxes of hygiene supplies and OSU tee-shirts to the [...]

I have one of the most easiest and best way to help windows 10 upgrade from our tutorial which you will do it in few steps without wasting your time and money.

Yeah, any time your captors are going to move you to a second location, you are more or less already dead 24essay. Might as well roll the dice and put up the best fight you can manage.

Unfortunately, there is no official app or software for GarageBand on Windows PC. Apple has not released any version of it for platforms other than those based on iOS. ... There are ways you can use GarageBand on your Windows PC.

Wonderful post!!! Thank you for sharing your perspective and experiences with us. Your way of observing things is commendable. Keep up the good work :-)
AOL Gold Support

Unfortunately, I didn't know about public criminology. Because I study in different fields and also works in so nursing assignment help offering assistance on various courses. So if you want to get help hire experts.

is this genuine that a few lawbreakers work alone and some work from two-five individuals? what is it generally do they for the most part work alone or with two to five individuals? like for instance I know two circumstances. one was a sequential executioner who choked his unfortunate casualties to death he works alone and other is a criminal who burglarized study halls at a school he works alone. does it depend of the wrongdoing in the event that it is just a single individual or not?

As a former job recruiter, I can say that we never hired anyone with an online degree. You have probably already heard of the stories about people hiring someone else to take the courses for https://vaporhub.co.uk/ them.

Excellent Blog! I would like to thank for the efforts you have made in writing this post. You guys are doing great job just like as https://sites.google.com/view/dissertationhelpinuk/

I want freely say that doing homework is not always so easy for me. I am studying programming and decided that https://assigncode.com/do-my-math-homework.html is a good solution for me. Such a way is a wonderful opportunity in order to deal with all the homework problems, ways to make your college solutions better and to overcome different problems with studying.