OJ Simpson was sentenced to at least 15 years in prison today for armed robbery, kidnapping, burglary, and assorted other charges. He would become eligible for parole in nine years. The judge specifically said that the sentence did not account for past events, most likely a reference to Simpson’s 1995 acquittal in the death of his wife, Nicole Brown Simpson and her friend, Ronald Goldman. I wondered how his sentence compares to others… 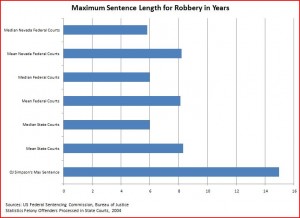 At first glance, data from the US Sentencing Commission and the Bureau of Justice Statistics on State Court Processing suggests that OJ’s sentence is a long one. For those with a most serious conviction offense of robbery, the mean maximum sentence length ranges from a little less than six years to a little more than eight years, far less than the 15 years OJ was given. OJ’s sentence also seems long in light of his short criminal history, err conviction record. As far as I know, his only prior conviction is a no contest plea in a domestic violence case involving Nicole Brown Simpson and some tax evasion judgments. 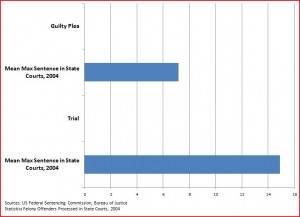 OJ also appears to have paid the price for not pleading guilty in exchange for a lesser sentence. Convicted robbers who go to trial are sentenced to an average fourteen years in prison while those who plead guilty are sentenced to just over seven years.

Much of the roughly seven year gap in OJ’s sentence relative to the average convicted robber is likely due to the included kidnapping and burglary charges. BJS data doesn’t include information on average sentences for kidnapping but I suspect they are not short but not overly long either (other sources suggest about 3-5 years in most cases) nor does it allow for separation of armed robberies from others. Burglary will get you almost five years in prison on its own. And, being a black male robber as opposed to a white male robber will get you a year more in prison. 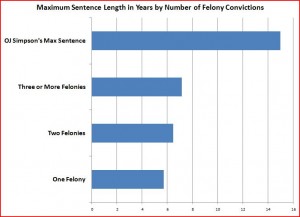 Still, I’d bet burglary and robbery often go together and OJ’s sentence is more than double those whose most serious offense was robbery AND had convictions of at least three or more felonies surrounding the same criminal event.

OJ’s sentence doesn’t appear to be improperly long but he certainly wasn’t given any breaks by the court nor did his relatively short criminal record earn him any reductions. In any case, I doubt he’ll have many supporters this time around to suggest that the court treated him unfairly.

[...] At first, I thought OJ’s sentence seemed long for a kinda sorta first-time offender. Upon doing a little research, it isn’t overly [...]

It's going to be end of mine day, but before end I am reading this impressive
piece of writing to increase my knowledge.

Many thanks for the nice post here it is the update know how to open saved passwords in microsoft edge and access the setting of secure data base.