tip for the crim meetings 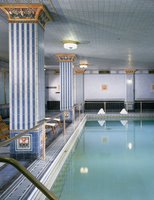 i’ve just returned from los angeles, where the 2006 american society of criminology meetings will be held. each year the ASC holds its midyear executive board meeting in the conference facilities for the upcoming november meeting. that way, the board can get a taste of the facilities and hammer down meeting details as it does its business.

the 2006 meetings will take place at the convention center, which means that the ASC booked rooms in three or four expensive hotels and will bus participants back and forth. i figure that the room block will fill fast, so i thought i’d pass along a little inside information.

after my stay this weekend, i can personally give a strong endorsement to the biltmore. the rooms are cool, with ancient curvy bathtubs and other amenities. but the truly inspiring spots are the art-deco lobbies, fountains, wrought-iron work, and pool area.

in the 1930s the academy awards were held at the biltmore, so there are great black-and-white photos of tyrone power, walt disney, and martha raye hanging about. plus, they still film scenes from the west wing and commander in chief in the boardroom and other spots in the hotel.

in my humble opinion, the whole place has a funky charm and nine billion times more texture than most conference hotels. see you in the bar…