growing up behind bars 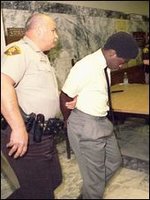 the seattle pi has a thought-provoking story today about willard jimerson jr., who at the age of 13 was sentenced as an adult to 23 years in prison for shooting and killing a 14-year-old girl. caught up in the moral panic over a new generation of juvenile “superpredators” in 1994, jimerson was one of the youngest people in washington state’s history to stand trial as an adult.

the article brings up many of the points i highlight in my juvenile delinquency class, from jimerson’s troubled family life, to his adjustment and survival in juvenile correctional facilities and adult prisons, to recent reports from the macarthur foundation about the development of the adolescent brain and young people’s ability to fully understand the consequences of their actions.

jimerson is now 25 and has spent half of his life behind bars. he faces another decade in prison before coming out and facing a world that will be new and strange to him. i’ve written about this transition (using the same title, in fact) from my own research spending time with juvenile inmates who were about to return to the community at age 19 or 20 after several years in a correctional facility. those boys — and they were still boys in many, many ways — were excited but also terrified at the prospect of being out on their own. they faced the daunting tasks of trying to find jobs and apartments, and of navigating new worlds of transportation, bank accounts, and adult responsibilities.

jimerson has spent the last several years taking advantage of the educational and vocational training programs available to him in prison. will he be able to put those skills to use and successfully make the adjustment to life on his own in the community? as the article says:

In his mind, life outside the walls, where most everyone has their own car and moves freely through space, glows like a luminous vision. But his prospects, post-prison, are not bright. When released, Jimerson will be a grown man with a felony murder conviction, minimal education and an estimated $36,000 in court fines.

to saddle jimerson with what must seem a staggering debt adds insult to injury and again shows washington state apparently trying to squeeze blood from a turnip. i hope jimerson can overcome the odds against him and make a successful transition into the community when he is released after two decades in prison. he’ll have paid his adolescence and his young adulthood for a child’s terrible crime. what he’ll do as a free adult will speak volumes about the impact of our Justice system(s) and our communities’ ability to redeem and forgive.

From a labeling persepective, since he was tried as an adult, he will have a very hard time trying to find a job and being able to pay off his fines, find a place to live, and live a normal life. Every place you go now does a background check and it is almost impossible to lie about your record like in Nathan McCall's case from the book Makes Me Wanna Holler. Is he going to go back to the same neighborhood he grew up in? Does he have any support group like family for example? What do you do with the kids that have made progress in the facilities they are at and don't have a support group when they get out to help them outside the walls of a prison. As in Juan's case, he has made so much progress in the boot camp he is in and he doesn't have a good, strong family that is behind him to help him when he gets out. I have been the support group for someone I know and I know how difficult it is to recover from your past. It is a long journey. Boot camp or other facilities are just the first step in a long road to recovery. You need someone to be strong for you and be there when you feel low. It is hard to make it all by yourself. Juan is fortunate that he was a juvenile when he commited all these acts but what about Jimerson Jr. who didn't have the opportunity to be tried as a juvenile and go through some rehabilitation. He was automatically tried as an adult and now he has more challenges to face. He has to try and be an adult at 30 when he hasn't had a chance to really grow up, he missed out on being a child and being a teen, he learned what he knows about life from prison. Plus the criminal record he has can not be sealed so he will constantly have to deal with that criminal label. I wonder what he will do when he is released. Will he stay on the right path or will he go back to his old ways? He has been in an adult prison. He has learned how to survive in there but will he be able to survive in the "real" world? I am very skeptical about it because if he goes back to his old neighborhood he probably wont have a strong support group, he will be labeled a criminal and he will try and try again many times to be successful in his new life but he might also fail time and time again. I worry that he will be let down and have no hope for the future and end up right back where he was, in adult prison. This case will definetly prove to everyone how effective our justice system is and if it is possible to overcome a terrible label. I am not saying he should stay in prison for the rest of his life, certainly not, but I do know it will be very difficult for him since he was in prison for so long. I hope everything works out for the best.

I think that today in the society we live in we forget that children are just children. If you look at juvinelle deliquency you will see a stricking comparison to the children who commit crimes, and the lack of proper parenting. Today's government is spending more and more money on punishment, instead of looking at treatment. If a child commits a horrid crime at age 13, its is our reasonsiblity to look at the bigger picture. Is this something that he did for attention? Or is this simply a another act that he has learned over time through his unstable family life? These children are too young to be labeled as a murder for the rest of their lives. I feel that the children are taking the blame for the lack of proper parenting that they did not recieve. For if you look at a deliqent child you will most likely find a deviant parent.
Im not saying that all children who commit crimes have horrible parents, I'm simply saying that by looking at the bigger picture we may be able to help prevent the deliqency before it starts. As a society we need to look toward treatment, rather than punishment for these children are the worlds future. Would you want a child that was locked up at the age of 13 for murder, thrown into an adult prison and then just simply released 23 years later as your neighbor? I didnt think so.

thanks so much for taking the time to comment on this post. i completely agree with the points both of you are making. i know i tend to go off on minor rants on these juvenile justice stories, but i really think it's one of the most important issues in crime and justice today. i hope by writing about it and talking about it, we'll get more people thinking about it, and perhaps then, we'll make some changes in the system.

thanks again for your comments.

I am facing an issue in my windows 10 pc so i want to get that how to see remembered passwords in microsoft edge browser with the help of our tutorial.