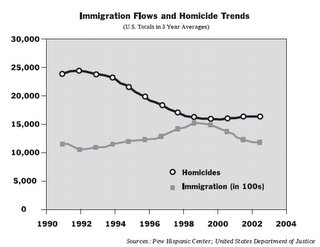 rob sampson has a fascinating op-ed on immigration and crime in the times this week. sampson argues that increasing immigration in the 1990s may have had something to do with declining crime rates.

such an effect is perhaps easier to see with a gender example. imagine that 75 percent of the new immigrants were women and, of course, that women commit fewer homicides than men. the incoming low-homicide group would pull down the overall rate in the larger population.

as long as the newcomers are less violent than the society they enter, immigration will similarly push down homicide rates. on this dimension at least, our newcomers appear to have had a civilizing influence on american life.

as for the author, i cannot think of a finer american sociologist than robert j. sampson. his status as a card-carrying criminologist might color my perceptions, but his record speaks for itself — and humbles the rest of us. surely he has helped me over the years and it is in my interest to speak well of him. nevertheless, i think i can look at sampson’s oeuvre critically and objectively because we think about social life in very different ways. in any case, the fact that he is writing op-eds bodes well for public sociologies and criminologies.