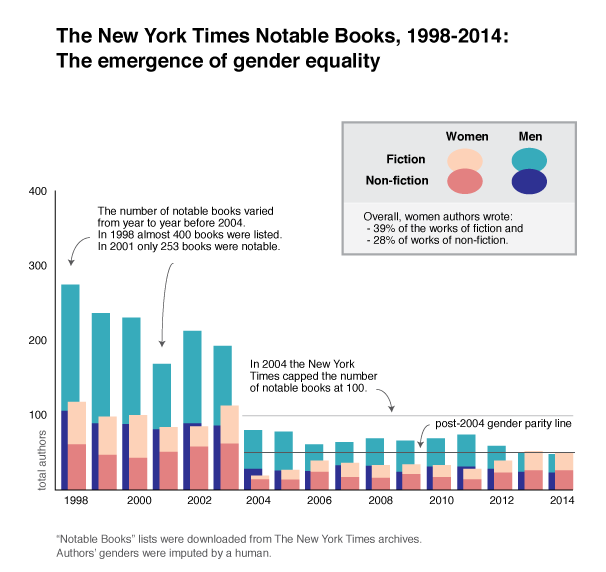 The above graphic represents the absolute volume of authors who have been mentioned in The New York Times year-end list of notable books. Since 2004 the newspaper has capped the list at 100 books, but prior to that the total number of listed books varied significantly from year to year. Therefore, displaying the absolute number of books considered notable is more illustrative of patterns within the organization than showing only the relative percentage of authors by gender.

One of the interesting things that this visualization implies is that capping the list at 100 at first drastically reduced the absolute number of authors who were mentioned in the list, but that this burden hit women hardest. During the first year after the cap was introduced only five women who wrote works of non-fiction in the previous year were mentioned. Fourteen women novelists and poets were listed. That’s only 19% of the hundred authors considered notable that year. In fact, I would argue that the most notable quality of the list that year was its dismal gender parity. It is possible some in the organization were able to confront the gender disparity because it started to move closer to 50/50, jumping to 39/61 the next year. But then…the best intentions may have faltered as the proportions slipped little by little back towards the one-third women, two-thirds men scenario that was more or less the pattern in the pre-2004 years.

Then in 2012 numbers once again jumped to 40/60. And in 2013 and 2014 the numbers held steady at an even split overall AND there was gender parity within the fiction and non-fiction verticals. In my head, I imagine some firm voice at a meeting demanding a quota, dammit, because all past efforts to agree to do the right thing with respect to gender parity had resulted in a lukewarm 40/60 that couldn’t hold up for more than a year at a time. This same voice probably also pointed out that it was not going to work to disproportionately recognize women novelists and poets and continue to leave women non-fiction writers under-appreciated. The quota covered the overall balance of the 100 notables and it applied within the fiction/poetry and non-fiction verticals. OK. That took a while.

Gender isn’t the only category of interest in these top book lists. Back in 2011 I looked at the number of academic authors who had made the list to better understand the backgrounds of our public intellectuals. Unsurprisingly, the NYTimes turned out to be partly populist, partly academic aristocracy.

As with so many depictions of gender, this one is locked into a gender binary. There were some trans authors mentioned. For example, Deirdre McCloskey’s Crossing: A memoir made the list in 1999. In her case, since she currently identifies as a woman, I counted her as a woman even though her book was about the experience of transitioning from one gender to another. It is an exemplary instance of why it might be more accurate to have a gender spectrum instead of a gender binary. Alas, I didn’t visualize that here. I’m not yet up to that challenge. I also failed to deal with publications released by committees or coalitions. Since they were impossible to categorize with respect to gender I left them out. The best example of a left out publication is the 9/11 report.

Another problem with this graphic is that it is static, not interactive. It would be more interesting if it had hover-over capabilities that could pop up the absolute numbers to which the area of the shapes are representing.

The gender disparity in the highest reaches of the literary scene is well known and widespread. Keep reading for some history on the gender parity problem in the literary profession that demonstrates both how well known and widespread it is. Choosing to represent only a single reviewing organization – The New York Times notable books list – is faulty in a couple ways. First, it implies that this particular organization is somehow at fault for a pattern that has been shown to be endemic in the field. Second, The New York Times has taken what appear to be successful steps towards ensuring an equal number of women and men get accolades for their work, regardless of whether they write fiction or non-fiction. This is a great success with respect to gender equity within that particular list, but it is lazy to assume other literary review organizations have been as successful. In fact, VIDA reports that most other organizations are still struggling to get to gender parity in terms of the authors whose books are reviewed and in terms of which types of people are publishing the reviews.

The history of gender equity in literary publishing

There is an entire organization set up to investigate the gender parity problem in literary circles called VIDA. Their mission is to “to increase critical attention to contemporary women’s writing as well as further transparency around gender equality issues in contemporary literary culture” using a “research driven” methodology. Since 2010 they have been putting together pie charts that show the gender parity within a whole range of literary field publications, including The New York Times book review, The New York Review of Books, n+1, The New Yorker, and many others. Also, they look at the gender of the people writing the reviews in addition to the gender of the people whose books are being reviewed. 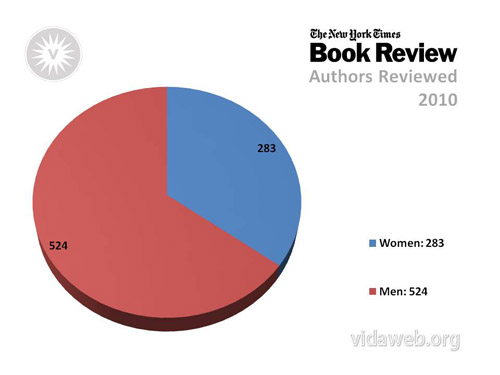 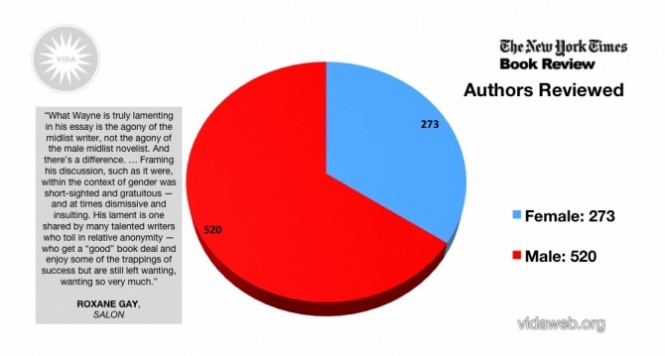 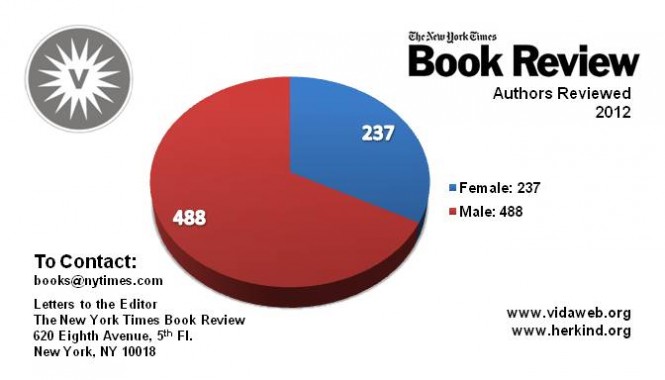 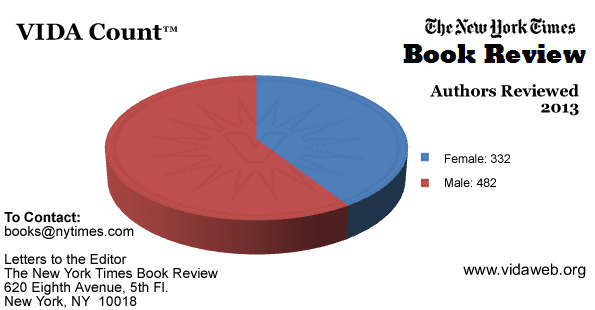 VIDA uses a team of interns to gather the publication history of all the newspapers and magazines they consider part of the literary scene. Mostly, these interns are unpaid. That is amazing. For the chart above, I grabbed all the data and did not rely on what they had done.

What else could work: A Datathon

Most savvy computational sociologists would recommend using a web scraper to generate a database with publication information and take a first pass at assigning a gender to the authors and reviewers. Some authors and reviewers will use initials (e.g. J. K. Rowling), have gender-ambiguous names (e.g. Pat, Parker, Taylor), or have otherwise difficult to gender-ize names. These would still need to be investigated by humans equipped with a search engine, but the workload would be dramatically reduced.

Does anyone feel like getting together at a datathon and scraping all the web-based publishers in a single weekend? Reply in comments.

“100: Fiction and Poetry Notable Books of the Year.” New York Times (1923-Current file): 3. Dec 04 2005. ProQuest. Web. 27 Jan. 2015. [Note: This file also included non-fiction titles though that would not be implied from the document’s title. For inexplicable reasons, the 2005 Notable Books list was not available through The New York Times search function at nytimes.com and had to be downloaded through the ProQuest database which is a proprietary service that I accessed through the New York University library.]

VIDA Count of books reviewed by the New York Times book review in 2010 VIDA Published 16 May 2011.