The post-it system for running an airline

As an image, this picture does an excellent job of supporting the argument made in the accompanying article, which is basically that merging two large companies, each with their own deeply embedded systems for handling passengers, planes, workers, and baggage as well as their own attitudes about how things should be done is a task nobody can understand until they attempt it. And then it becomes tedious almost immediately. The New York Times often saves clinchers for the end of the article and this one was a good one. Peter Wilander, an executive at Delta responsible for in-flight services (talk to this guy if you have a problem with the peanuts), cannot hide his frustration,

“The amount of work is boring beyond belief,” Mr. Wilander said. “It is also critical to the airline.”

Is there anyone else out there who feels that if the PhD in applied mathematics is resorting to a merger by post-it, that there are real shortcomings in the system’s management abilities at Delta? Theresa Wise is Delta’s Chief Information Officer and the creator of this lovely Post-It art. While the post-its are both aesthetically pleasing and instantly graspable, I could not square the idea that a bunch of post-its stuck to a wall would really be the right answer to a problem like this:

A major switch happened when the new airline canceled all Northwest’s bookings and transferred them to newly created Delta flights in January 2010. It required computer engineers to perform 8,856 separate steps stretched out over several days.

Here’s hoping that my experience with Delta later today does not involve making seat assignments with Post-Its. For all of my snarkiness, I generally find Delta to be a good airline, better than the old Northwest. 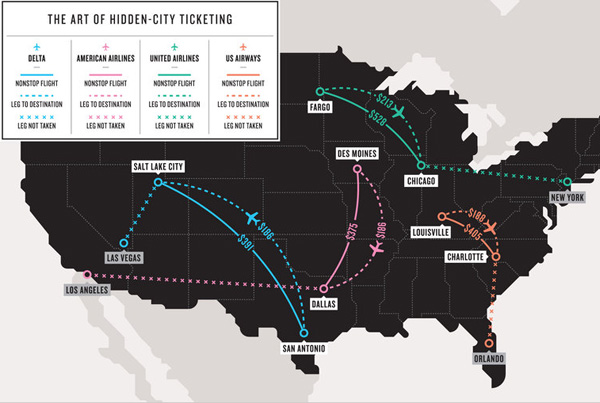 Excellent use of a map

I spend a lot of time explaining which uses of maps are bad. In this case, the use of a map is spot-on. Nothing could better display this information than a map. So here’s what you are seeing. Due to the mechanism that determines flight pricing, some non-stop flights from City A to City B are cheaper than multi-leg flights that take passengers from City A to City C with a layover in City B. Figuring out where these curiously expensive cities are and then booking tickets through them (instead of to them) is called hidden-city ticketing. It’s technically forbidden by the airlines because it messes up their profit-making abilities, more on that later.

There are some markets – Atlanta, Cleveland, Salt Lake City, Charlotte, Detroit, Cincinnati or Chicago O’Hare – where prices are too high compared to the rest of the airfare market. If you want the longer version of why this is true, there is an excellent, lengthy, FiveThirtyEight/Nate Silver blog post, Which Airports Have the Most Unfair Fares?, on the vagaries of airfare pricing. Suffice it to say, if you happen to need to fly into one of these expensive cities, especially if you do it often, you are interested in figuring out how to avoid feeling like you are getting ripped off.

As a visual representation of this simple-but-hard-to-explain Point A to Point C via Point B scenario, a map is the best way to clarify the concept. Just look at how the visual works. A person starts in Fargo and wants to get to Chicago. If they crank that request through kayak, they end up with a direct flight to Chicago for $586 [ouch]. But if, instead, they tell kayak that they want to go from Fargo to New York with a layover in Chicago they end up paying only $213. Kayak let’s you tell it where you’d like to have a layover. (Detroit’s airport is surprisingly nice, for instance, and if I have to layover in the summer, I’ll go through Detroit.)

How can airlines charge less to fly a person a greater distance? Not all airline pricing is driven by fuel, snacks, and human capital costs. A good bit of it is driven by demand and supply – the classic economics story from your undergrad days. Some markets are not well served creating mini-monopolies for service in and out of those airports. Other markets, like New York, have a great deal of service provision forcing airlines to pull their prices into a lower, more competitive range.

Perhaps you have read somewhere in your ticket’s fine print that the airline prohibits you from bailing out of your scheduled travel halfway through the trip. The New York Times asked a lawyer whether or not it’s even legal for the airlines to penalize people this way and how far they can go to punish someone caught doing this. It turns out, there are penalties the airlines can impose, but most of them can be side-stepped by savvy travelers. The Times presented recommendations, summarized here:

Making a habit of this certainly won’t endear you to the airlines. Most of them — the major exception being free-spirited Southwest Airlines — expressly forbid it in their ticketing rules. But those rules don’t carry the force of law, and most travel lawyers say that their recourse is limited. They could probably preclude you from flying with them in the future, but their case for demanding penalties is weak, and the risk of detection is low if you don’t book these kinds of routes more often than a couple of times per carrier per year.

Also, do not end up checking bags. They will end up at your final destination. Get to the gate early enough to ensure yourself space in the overhead bins.

Book your itinerary as two one-way flights. This should be logically obvious. If you are going from Fargo to Chicago but you book your ticket through to New York, you clearly won’t be wanting a return flight from New York because you never intended to actually see the Big Apple in the first place. The other kicker is that if you fail to report for part of your ticket, the airline will probably cancel whatever remains on the ticket. So book one-ways.

Don’t lie if the airlines catch you; lying increases your likelihood of being found guilty of fraud. Honesty is the best policy.

Maps of public transportation are my favorite visual shorthand for any major city, not only because I have to rely on mass transit where ever I go, but also because these highly stylized versions of cities contain much more than the bare minimum amount of information to get from one point to the next. I will be in Tokyo checking out the public transit system and attending the 4S conference through the end of the month.

See you back here in September.

Air traffic, the volcano, the CO2

Volcano = triangle. Love it. Red is bad, black is good = kind of perfect. Being able to see that the volcanic eruptions are actually net benefit events because they release less CO2 than they prevent is great. I do wonder if the uptick in flights that inevitably follows any singular event could be mapped. Furthermore, when I was in Europe during the first major eruption event and I would say plenty of people were renting cars. I know that isn’t nearly as bad as flying, but it does contribute some CO2. I also wonder if this graphic could be expanded over time to see if the volcano ends up contributing or inhibiting contributions to global CO2 over time. Will people stay home or at least stay out of Europe, taking shorter flights (or no flights) because they are worried about the volcano?

The volcano needs work. It needs to stop eating my luggage. That’s all I have to say. I know that if you are reading this and even moderately awake, you will point out that if I stopped flying I would not have a luggage problem and I would not be polluting your world with all my flight traffic. So maybe I’m the one who needs work.

The Graphic
McCandless, David and Bartels, Ben. (16 April 2010) Planes or Volcano? at Information is Beautiful.

Diagram for choosing a good seat on the plane

The diagram assumes a number of user groups – parents of youngsters, sleepers, long-leggers – in addition to universal concerns like not dying in a crash or understanding that your appendages are more likely to be run over by the beverage cart if you’re seated on the aisle. Friend of mine broke a foot that way so I’d say it’s a non-trivial concern and lends support to the choice of the bulkhead rather than an aisle seat for those with long legs.

This blog needs work. I haven’t posted any non-standard graphics lately. Boring. Even though this has nothing to do with sociology, it’s a necessary inclusion.

Smith, Lauren and Fagerstrom, Derek. (2008) Show Me How. Collins Design.

Cause of flight delays – not just security

The entire graphic is quite large. If you click on the image or here you will be able to see it in all its glory. Hope you invested in some screen real estate because GOOD is making some optimistic assumptions about the size of your monitor(s).

I took the liberty of including a close-up here. Should suffice.

The window up and down is cute and of course I am thrilled that they included the percentages those window shades are representing with actual numbers.

This strikes me as one of those graphics that looks far more clever than it actually is. I have no reason to believe that security measures caused flight delays, except that the explanatory text suggests it is so. Here’s why I have logical doubts. First, the period over the Christmas/New Year’s holiday season is notorious for weather related delays. Maybe some of these cities had some nasty weather in one year that they didn’t have the previous year? I didn’t actually look this up, but the point is that if I were to be convinced that security alone could cause flights to be delayed I would need to know about other likely reasons for delays. Another problem could have been the relative level of fullness of the flights – fuller flights take longer to board and deboard.

From my anecdotal experience, another cause of delays has been the increase in baggage fees. Due to the fees, more people try to cram all their luggage into the overhead compartment which makes planing and deplaning an agonizing experience. I’m quite sure we’ve watched someone about my height (short) struggle to remove an uncommonly heavy and unwieldy bag from the overhead compartment a few rows BEHIND their assigned seat. The fight goes on for at least two minutes and could include the passenger standing, one leg in each aisle seat. Hey, kids, that’s entertainment. If everyone involved is lucky, nobody gets hurt. If not, the bag is a hard-sided suitcase full of, say, sociology text books, that lands on the head of an unhelpful but otherwise blameless person sitting in the seat below. Then there are at least five minutes of first aid, profuse apologies, tardy offers of assistance from some passenger who had been standing around making impatient grumpy faces up to this point, and general pandemonium.

My point is: this graphic seems to be based on convenient rather than thorough research. Maybe the delays were caused by increased security measures alone. But as a logical consumer of infographics (and frequent flyer) I admit, I’m skeptical. Could have been weather, could have been fuller flights, could have been the restructuring of baggage handling, or, more likely, some combination of all those things.