In “Squatting with dignity: Lessons from India” Kumar Alok details efforts to increase the provision of sanitation at the household and community level. Along the course of the book, he presents all sorts of interesting data – some of his studies present information rarely gathered in the US. In the first table I’ve chosen (on page 293), Alok demonstrates that even after areas have received ‘Clean Village Awards’ (Nirmal Gram Puraskar = NGP and means Clean Village Award) there is generally still open defecation, one of the key elements that was supposed to have been eradicated in order to achieve the NGP status in the first place. He writes that the reason for this is multiple. Of course, the first problem is the lack of household toilets, then there’s the lack of public toilets both of which force people out into the open. The Clean Village Award was intended as a measure to increase investment in toilet infrastructure and winners in the first year were photographed shaking hands with the President of India. Alok’s deep research revealed that this photo opportunity caused leaders in many villages to seek the award just to have a photo with the President. This increased the number of awardee villages in the second year of the program so much that the President was not able to shake all the hands: “…only few were allowed to personally receive the award from the President of India. For the rest, the photographers did the magic. Using the modern computer tools, they produced photographs of individual PRI members shaking hand with the President of India….There was a serpentine queue outside the photo shops in Bengali Market immediately after the NHP award distribution ceremony was over.”

It is hard to predict just what will stand in the way of public toilet provision. I would never have guessed photoshop (and its knock-offs) could have led to an increase in pro-toilet hype while subverting actual investment in toilet infrastructure.

Where do people in India excrete?

The bars above are a bit clumsy as graphics, but they contextualize the information about open defecation by illustrating where else people might relieve themselves. The IHHL category refers to Individual Household Latrines and is the lowest section of the bars [the color coding does not come through at all]. Basically, this refers to people who use the toilet at home but does not indicate just how those toilets are plumbed. They may or may not be flush toilets. Many of them are not flush toilets. I find it useful to see how much variation there is across space. I also think it is worth noting that there are very few people who report using community or shared toilets. Open defecation is far more common than either of those two categories. In her film Q2P Paromita Vohra shows viewers that women have very few opportunities to use public or shared bathrooms. There are not many public facilities and where they do exist, the women’s areas are often taken over by men, leaving the women without a place to go. What’s more, where women’s rooms are still for women, the women have to pay to pee but men can use urinals in the men’s room for free.

Alok notes that another contributing factor to the relatively high proportion of open defecation is that not all toilets are being used. Sometimes open defecation is preferred. He writes that children are not deemed to need as much privacy as adults and that, furthermore, their feces is not thought to be as ‘dirty’ as adult feces. Thus, children are often allowed to go in the open rather than seeking out toilet facilities. As a result, “in only 51 per cent of the households either children are using toilets or child feces are disposed in the toilet. Forty-one per cent of households dispose feces in open space or along with solide waste, while 3 per cent drain out feces in the drain.” While it may at first seem a bit silly to think that children’s waste is somehow different than adult waste, think about what we do with dog waste. In the US people use hands covered with thin layers of plastic (or paper) to pick up dog poo and then dispose of it as if it were solid waste.

Alok continues to investigate sanitation practices, writing about hand-washing practices. This kind of information is something I would like to see for US-based populations. It is out there for hand-washing following the bathroom but there are not always break downs by what the person was doing (pooping or peeing) and I cannot recall coming across information about hand-washing before eating or after changing diapers…or picking up after dogs. 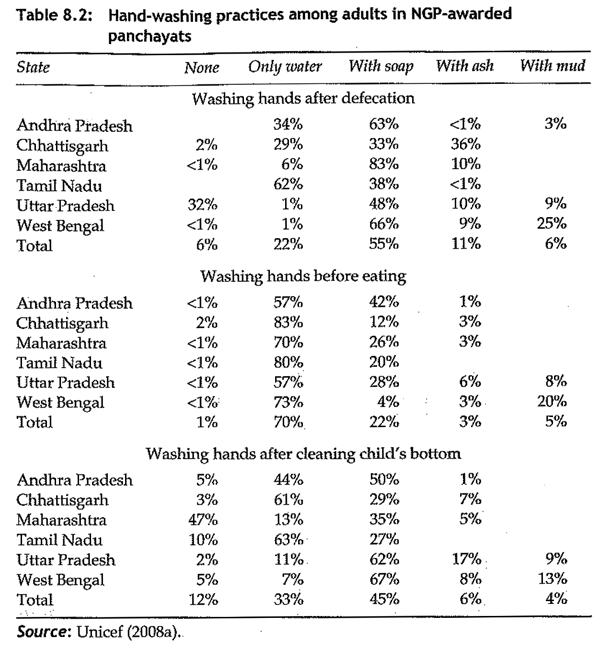 What works and needs work

My job here is to critique graphics and graphical representation of social science data. The tables and graphs here are not at all easy to use or beautiful to view. But the information is fascinating. It is almost always more important to get the information out in front of a public than to hide it away because it may not be formatted as well as you might like it to be.

For some US data on handwashing behavior, see
http://www.cleaninginstitute.org/assets/1/AssetManager/2010%20Hand%20Washing%20Findings.pdf
Intersted in your critique of their graphics.
(I use some of this material in my Intro Soc course for discussions on methods (observational fieldwork vs surveys) and on the sociological imagination. A fun exercise for students!)

The report also includes observation at public venues. Overall 77% of subjects were observed to wash hands in public restrooms.

But neither survey nor observational data for the US provides the detail of HOW people wash their hands (as in Table 8.2). With or without soap? Cold or hot water? Length of time washing? Alcohol-based hand santizers? Baby wipes?

Based on self-report, 15% of US adults do NOT usually wash their hands after changing diapers. Higher than the average of NGP-awarded districts (only Maharashtra fared worse) in not washing hands by any means after wiping a child's bottom (Table 8.2).