The documentary “People Like Us: Social Class in America” (an excellent film, if you haven’t seen it; my students always get a kick out of it) includes a section about Honfest, a yearly festival in Baltimore. The film brings up some interesting questions about Honfest, particularly what it means that one group of Baltimore residents dresses up and acts like a caricature of another part of the population–“hons,” or working-class women (so named for their supposed habit of calling everyone “Hon”).

The Bawlmer term of endearment, Hon, short for Honey, embodies the warmth and affection bestowed upon our neighbors and visitors alike by historic working-women of Baltimore. HonFest is an annual celebration in honor of these women…

In answer to the question, “Is the hon a dying breed?,” Denise Whiting, creator of HonFest, exclaimed, “No! Absolutely not. Hon will live on forever in our hearts, and HonFest gives everyone an opportunity to celebrate and embrace their heritage.”

The festival includes a Miss Hon contest. Here is a photo of Miss Hon 2007: 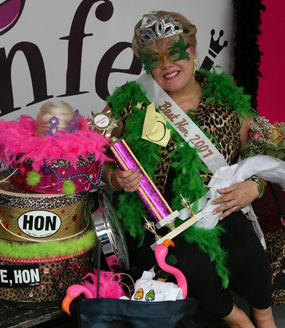 The website’s description of hons:

…the women who vie to become Baltimore’s Best Hon are a vision of the sixties-era. They are women with beehive hairdos, bright-blue eye shadow, spandex pants and anything with leopard print!

But commentators in the documentary argue that some of the things being parodied–big hair, certain makeup and clothing styles–are still common, particularly in the working-class areas of Baltimore. From this perspective, it’s not just that people are mimicking or parodying the past; there’s also an element of class ridicule involved (since the style, taste, and speech associated with working-class women are being fetishized and parodied by other, often wealthier, women). This brings up a number of questions: Is this just good-hearted fun? Is it truly honoring these women, or mocking them? Does it bring attention to Baltimore’s working class residents, or simply treat them like they are historic relics?

It’s condescending now. The people that celebrate it are not from it. I feel that in some weird way they’re looking slightly down on it.

This might be useful for a discussion of social class and issues of representation–is Honfest respectful and fun or condescending? Does it make any difference whether some of the styles and mannerisms being parodied are still used by working-class women? Does it matter what the class background of attendees and participants tends to be? You might compare it to the controversy surrounding American Indian sports mascots for a discussion of concerns about representation more broadly.

Recently I saw this wood sign for sale in a catalog (available here, if you really want one): 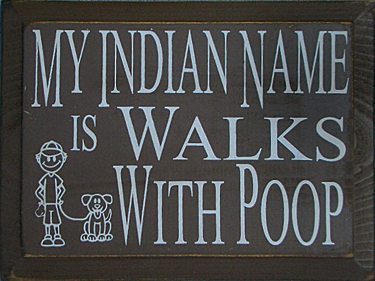 Looking around online I found this t-shirt here, which combines the “My Indian name is” element with a twist on “kicks like a girl”: 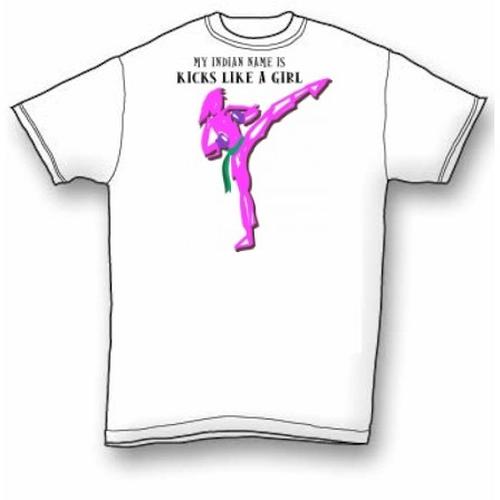 I have seen things like this before, and they always irritate me (and I blame the movie “Dances with Wolves” for the whole “Indian names always follow the pattern ‘Present-Tense Singular Verb + With + Noun'” idea). There’s an element of othering here–the idea that American Indian names are funny or weird. Part of what I think is considered funny is that the names are presumably tied to actual activities or things (for example, Mankiller or Redbird). Of course, many European surnames originated the same way (for instance, “Smith” was a surname often used to indicate the person was a blacksmith, silversmith, etc.), but they now hold the status of “normal” surnames that are unremarkable (although Smith has become somewhat remarkable as a symbol of White non-ethnic normality, such that it is often used in movies and TV shows as an alias by spies and others wishing to avoid attention).

That website led me to this one, where there were lots of “Native American” t-shirts. As far as I can tell, it’s not a Native-owned company, it’s just a bunch of shirts with Native people or themes on them. Some, like these, associate American Indians with animals: 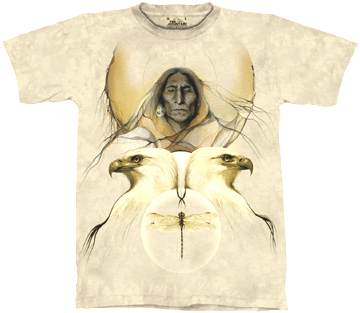 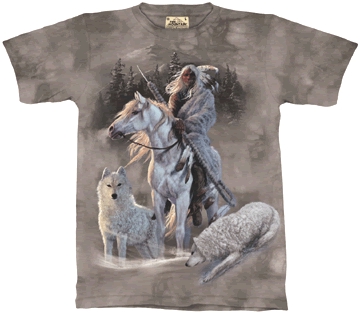 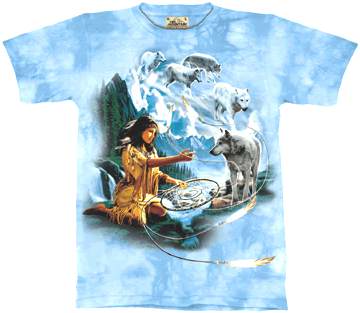 Whereas the t-shirts with men on them tend to show them in battle or hunting, those with women generally have romanticized, sometimes vaguely sexualized images. I noticed several have a common element: the upturned face, often with closed eyes, as well as stereotypically “Caucasian” features, except with darker skin and hair. This one is called “Purity”: 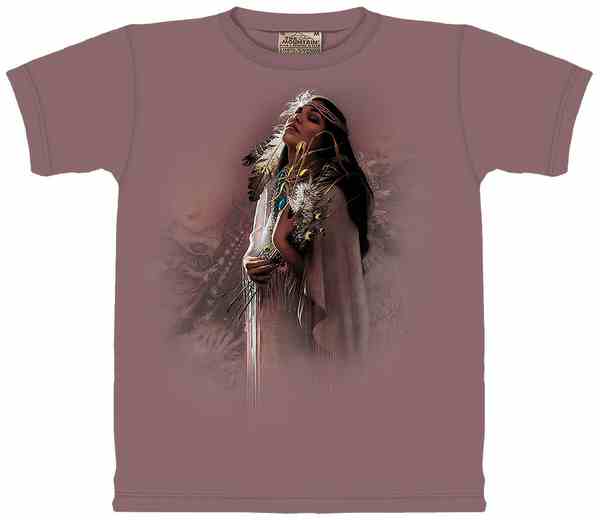 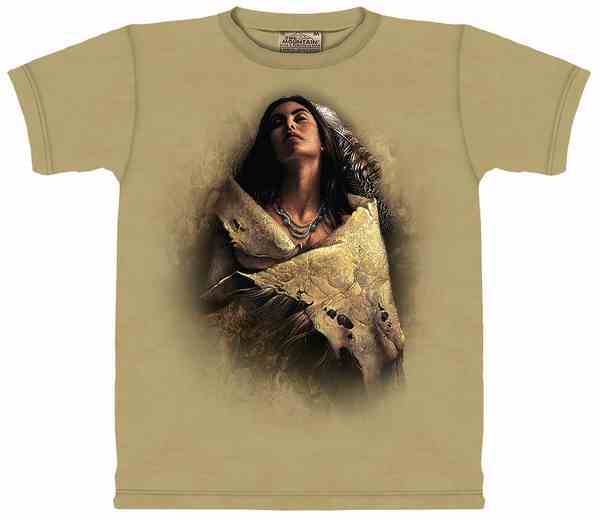 You might use these in a discussion of representations of Native Americans, particularly how they continue to be worn as symbols by other groups. The things associated with American Indians–wildlife (particularly wolves), nature, and the warrior tradition–tend to romanticize their connection to the natural environment and even portray them as part of nature themselves, able to communicate with the other “wild things.”

It’s a weird double bind: on the one hand, presumably American Indians are more “noble” than other groups–surely they wouldn’t have driven wolves, bald eagles, and bison to the verge of extinction, given their close connection to nature. But at the same time, they are depicted as relics of the past, brave fighters from the glory days. American Indians who drive cars and wear t-shirts and blue jeans (and have last names like Smith and Thomas) don’t have a place in our romanticized images of Native groups. 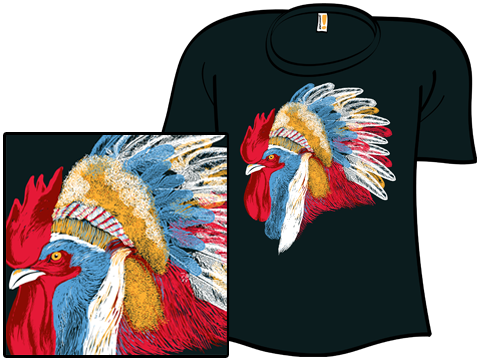 How the West Was Fun: 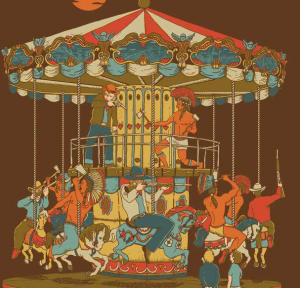 Andrew Sullivan suggests that this commercial for Pearl Cream that fetishizes (upper class) “Oriental” women is from the 1970s, but a commenter of his makes a good argument that it was on cable television in the ’80s and ’90s. Do you remember this commercial?

In honor of the election, we offer you a summary of all our election 2008 posts.

This election has certainly brought racial tensions front and center. We highlighted two racist caricatures of Obama: on a waffles box and as a cannibal. We also discussed the cover of The New Yorker on which Barack and Michelle Obama were caricatured as terrorists. Whether or not this was racist was widely discussed and offered an interesting opportunity to ask “Who decides what we talk about?” In response to the argument that we were being too sensitive about the caricatures, we offered some evidence that caricatures of black people do not need to be racist.

Anti-Obama propaganda also included comparison with OJ Simpson, a monkey, celebrities, Osama Bin Laden, fascists and communists, a terrorist, a terrorist again, and a “half-breed Muslin.” See here for other racist anti-Obama propaganda.  Gwen asked “So what if Obama is an Arab?” (Note, too, this satirical T-shirt.)

We saw racialization–or the active production of racial meaning–in the fist bump controversy, in calling Michelle Obama a “baby mama,” and in asserting the whiteness of the White House. We discussed the resemblance between Obama and his Grandfather and the meaning of “Main Street” to illustrate the social construction of race.  And we offered examples of white privilege: in one we discuss the option of white ethnics to emphasize their ethnicity; in two we discuss a cartoonist who calls Colin Powell a race traitor for endorsing Obama and a Howard Stern clip that suggests that Blacks only endorse Obama because he’s Black.  We also remark on how easy it is to deride social theories of inequality.

We commented, more sociologically, on the gender politics of this election. We discussed the mothering of baby Trig, conservative feminism, the politics of pink, and took a humorous look at the women’s vote with Sarah Haskins.

We also pointed to the way in which Obama and Clinton attempted to appeal to small town people and the ease with which we make fun of them.

Looking more broadly at politics and media coverage, we discussed the portrayal of evil in the Reverend Wright scandal, McCain’s trivialization of war, the linking of a Democratic adminstration with a terrorist attack, pundit hypocrisy, political networks, a voter registration campaign that uses bondage imagery, suspiciously delicious polling techniques, how cell phones shape polling findings, and trends in media coverage of Obama versus Clinton and Obama versus McCain.

In addition, we offered some examples of punditry from alternative media: on young voters, a call for alliance from the labor movement, a call to get your Jewish grandparents to vote for Obama, a political revival of the Budweiser Wassap video, and two examples of art inspired by the election (here and here).

We also put up posts of figures representing public opinion on blacks, a woman president, and politician parents.  And we offered images illustrating how the world would vote.

In U.S. culture, the stereotype of Black women includes being too loud, aggressive, etc (i.e., masculine).  Thus, to fit into the role of first lady, according to Reuters, Michelle Obama must “soften” herself.  Note that the text accompanying this headline emphasizes that she’s just going to be a mom. 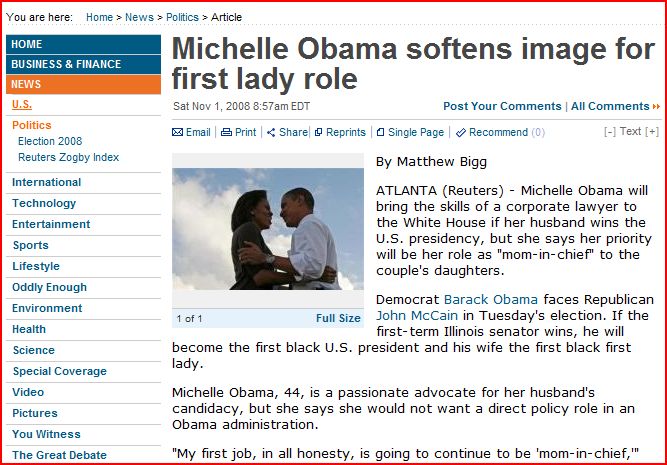 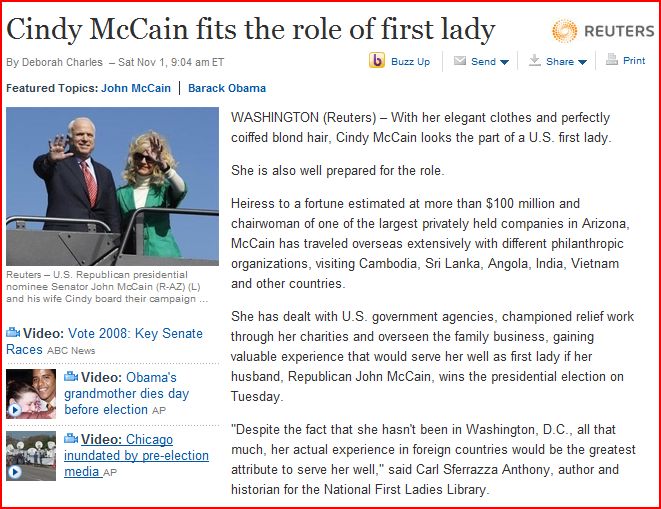 Click on either image to enlarge.  Full articles can be found here and here. Via Jezebel.

See also this post where Michelle Obama is called an “angry black woman.” 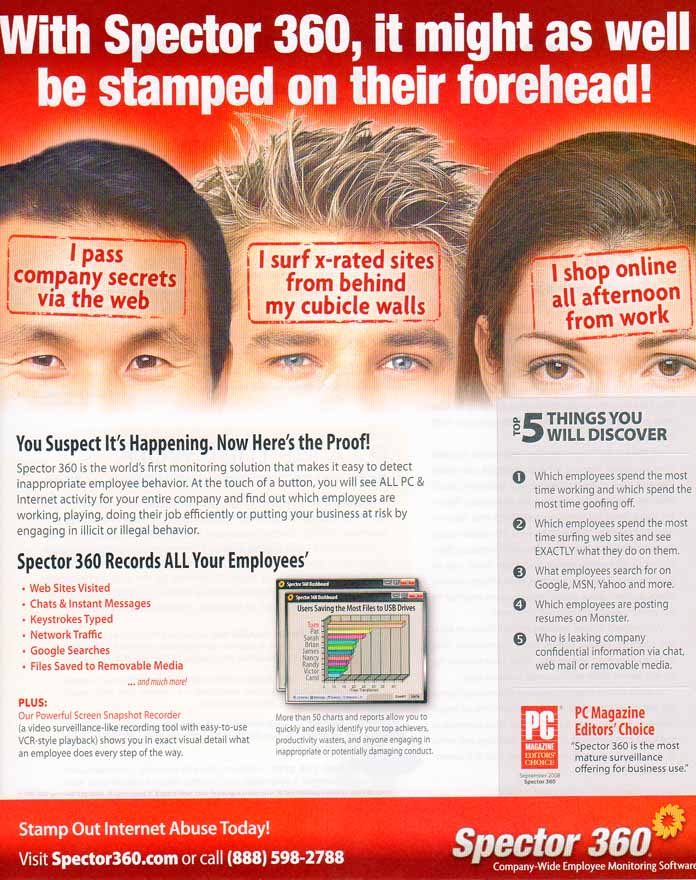 Because old people NEVER have sex: 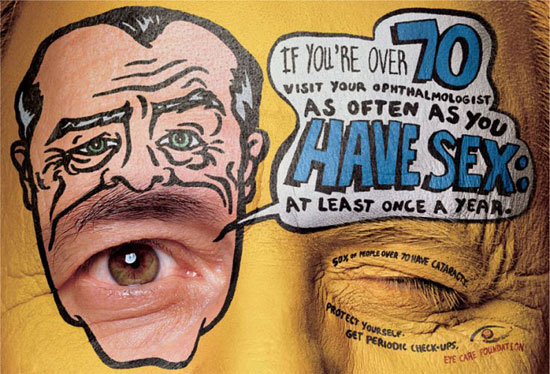 And all black people love the blues: 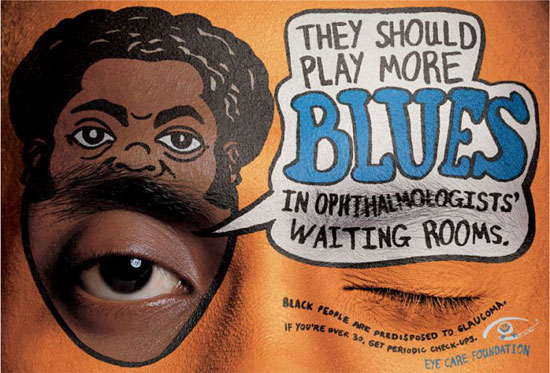 I use TV dinners to show my students that nearly everything, even things they’d never expect, are awash in race, gender, and class meaning.

Hungry-Man is probably the most obviously meaning-laden of the TV dinners.  It is aimed directly at men, of course, with one and a half pounds of food, an excellent blue box, and a strong font in all capital letters.  But it also advertises a particularly working-class masculinity.  In these two boxes, notice the references to “backyard barbeque” and “sports” (XXL).  The food itself, barbeque chicken and pork, mashed potatoes, and beer battered chicken, reinforces this class message.  But this is also about race, as the working-class masculinity is implicitly white. 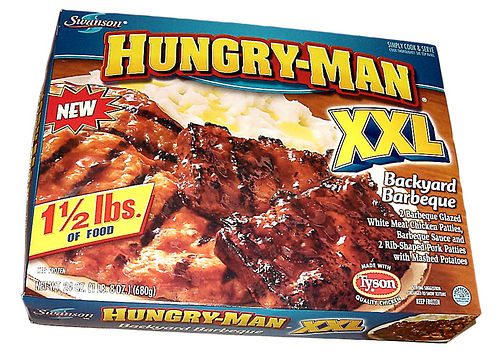 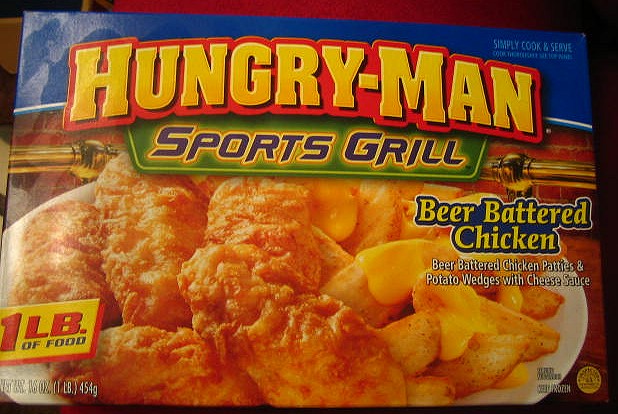 Stouffer’s, in contrast, is more moderate.  The font for the brand is cursive, for the meal in lower-case.  Without being over the top, it still passes as masculine. 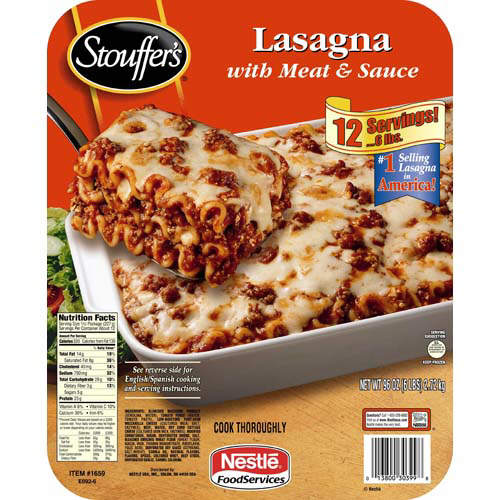 Stouffer’s bistro, in contrast, is a feminine version.  References to a “bistro” makes you think of France (a notoriously feminized country) and the meal here is a “crustini” (something a “real” man would never eat). 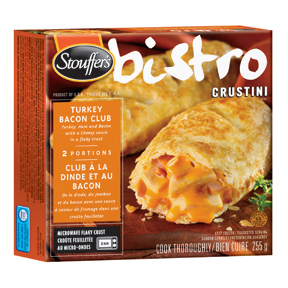 Healthy Choice seems to go further towards neutralizing its brand.  The green color is neutral and using the term “healthy,” instead of “diet” or a similar word, keeps the brand from being too feminine.  Plus, there’s a running MAN in the logo.  Still, there’s a feminine feel to the food choices.  The first meal is “Roasted Chicken Marsala… in Wine Sauce with Penne Pasta [and] Green Bean and Red Pepper Medley.”  The second includes “Caramel Apple Crisp” and “Broccoli Florets.”  Descriptions of truly manly food would not include “wine,” “medley,” “crisp,” or “florets.” 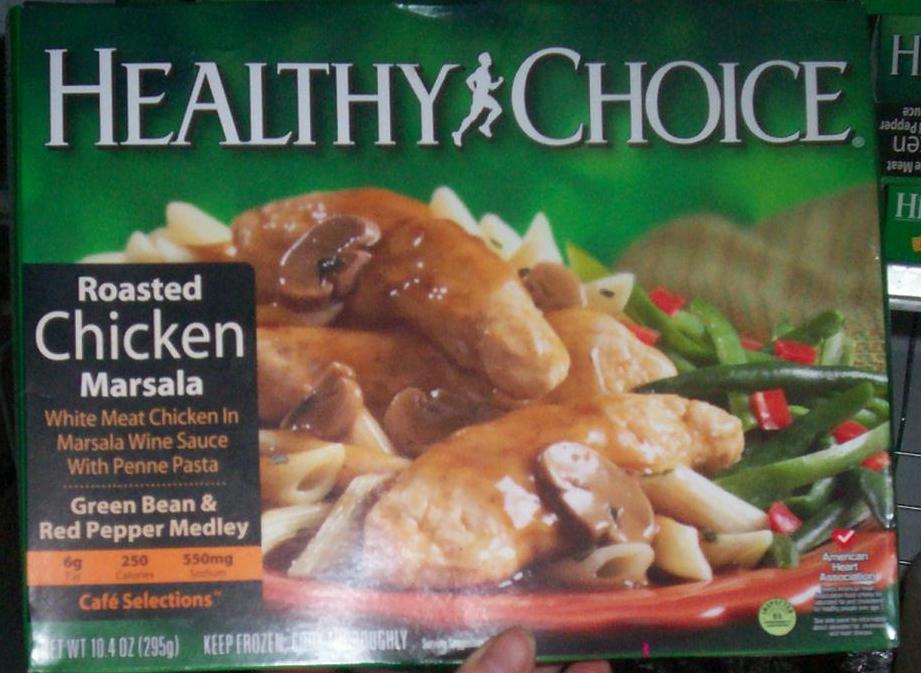 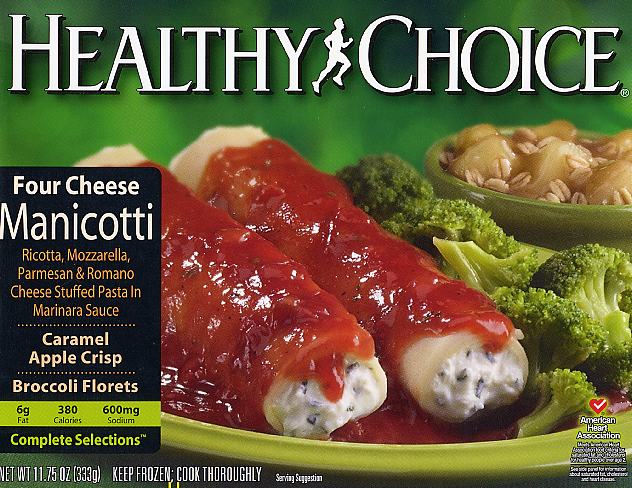 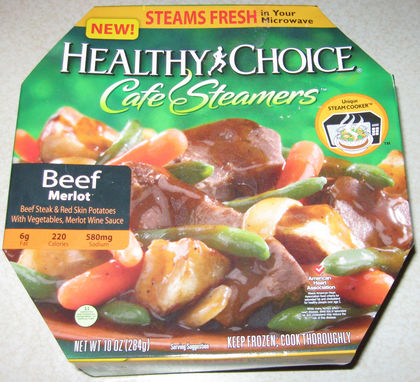 Lean Cuisine is the most feminized brand.  Between the turqoise and orange color scheme, the reference to slimness with the word “lean,” and the delicate all lower-case font on the boxes, the fact that the product is aimed at women is clear.  There is also a class message.  Who eats “Szechuan Style Stir Fry with Shrimp”?  Not the same guy that eats “Backyard Barbeque.” 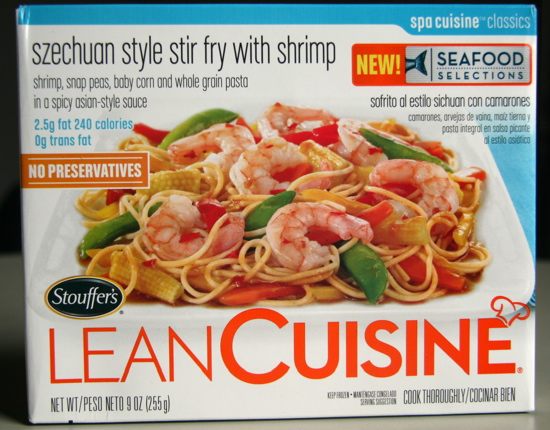 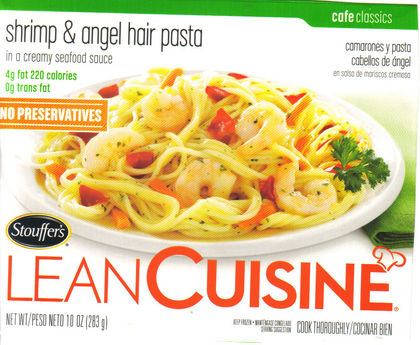 In this election, no one wants to be “elitist.” You know, the kind of person who went to an Ivy League, speaks perfect English, and avoids processed foods like high-fructose corn syrup.

Ben O. sent us these two ads, made by the Corn Refiners association, in which two historically marginalized groups–women and blacks–get it over on historically privileged groups–men and whites respectively–by exposing their obsessive-health-food-mania. Ben writes:

…the implication is that critics of [high-fructose corn syrup] HFCS are privileged (white and/or male) people who are condescending to inform black and/or female people that HFCS is bad, although they’re not only paternalistic but ignorant. And in both ads, standing up for the supposed virtues of high-fructose corn syrup appears to be an empowering action.