Yesterday Colin Powell endorsed Barack Obama for President.  In the cartoon below, syndicated cartoonist Gordon Campbell compares Powell to Benedicte Arnold, a general in the American Revolutionary War who defected to the British Empire.  So, Powell’s endorsement makes him a traitor.   Comments after the image. 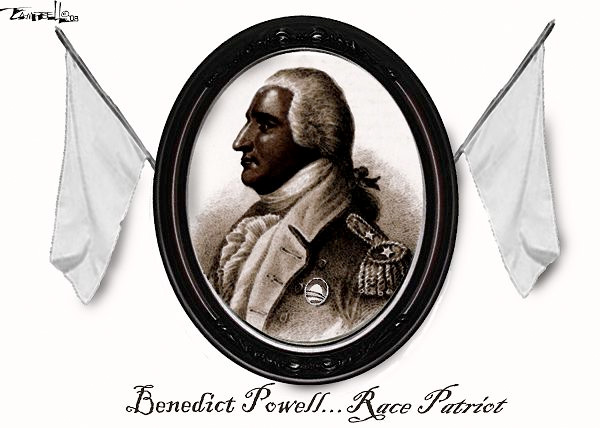 As Rob Tornoe discusses at Politicker, this feeds into the idea that Obama isn’t a real American and, accordingly, neither is Powell.  That this is about skin color is revealed by the fact that he put Arnold in blackface. and uses the term “Race Patriot.”  The implication is, Powell is endorsing Obama because he’s black and that’s treason (i.e, anti-white and therefore anti-American).

It also speaks to white privilege and a phenomenon I’ve seen elsewhere during this election.  It is white privilege to be able to vote for Obama without your endorsement being attributed to the color of your skin.

I heard an interview on the BBC this morning asking a GOP why Colin Powell should have endorsed McCain instead. The answer - to my ear - boiled down to "Republicans made Powell the person he is, so he owes Republicans his loyalty."

I find this reason highly insulting to the man's career and it could be taken as an insult him, since it might imply that the only reason a black man became such a high-ranking general and the Secretary of State was due to Republicans, and it is for that reason alone that Powell should be loyal.

What the hell...(closes eyes and shakes head in disgust).

Google the words "Lieberman" and "Traitor" and see what pops up.

LOL... some on this site think Google doesn't exist and that nobody can find liberal hypocrisy with the tap of a few keys.

I'm not sure this really counts as a case of "white privilege." By the same token, white people voting for a white candidate (when there is a black candidate) can be accused of voting for them on the basis that he is white. Indeed, many white people voting against Obama were accused of voting on that basis (of course, it is a further question whether it was reasonable to accuse people of voting on the basis of race in either of these cases).

Good article and knowledge for me! I found a lot of information here! Likewise mine rarbg