eallen on September 15, 2008
Declare Yourself, “MTV’s official voter registration partner,” has a new series of print ads up featuring Jessica Alba. I think they’re selling electrical tape…or maybe violence against women. Possibly kinky bondage play? Oh wait…they just want us to vote. Click picture to view it larger. [Discussion of campaign found at Guanabee.]
NEW! Thanks to Marcello, who, in the comments, provided a link to the rest of the ad campaign, which contains more equally problematic images of celebrities with their mouths violently sealed by fish hooks, ribbon, staples, etc. Here’s another disturbing one of an African-American man with a ball gag made out of an eight ball: 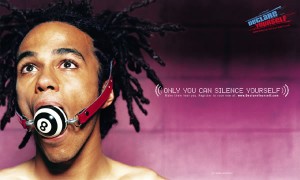 This particular image reminds me not only of kinky sex toys, but also of the harnesses, manacles and other devices designed to suppress and humiliate enslaved people.

i think is more like "free yourself from these chains, vote!". surely it's not endorsing torture nor violence against women.

the message is that all you need to do to free yourself is to speak-up and vote.

images are strong and violent, but i really don't think they portray violent in a sexy and enticing way, the violent elements of the pictures are clearly something "they" want you to get rid of.

plus the whole campaign is equally split between men and women subjects, all in the same situation, i don't think sexual discrimination was one of their aims.

[...] EITHER.”Abby on “THIS IS NOT AN AD ABOUT CARS, AND IT’S NOT SEXIST, EITHER.”Marcello on DECLARE YOURSELF VOTER REGISTRATION [...]

I would have to agree with Marcello. These images in no way portray violence as sexy or desirable - note than many of the subjects are crying. Also note that viewed as a whole, the subjects represent a relatively diverse cross-section of groups historically disenfranchised, often by the use of violence against them. Perhaps a graphic reminder is an appropriate way to prod a younger demographic into remembering our right to vote came at a cost to many before us?

Well, I think it's pretty obvious to say that on the surface, this campaign is not advertising violence or bondage.

However, I think what eallen is getting at here is that the particular choices of images weren't necessarily obvious. I don't see the immediate connection between a bound Jessica Alba and increasing voter turnout, besides the sex appeal they are using to "sell" the idea.

Also, all the men with the exception of the image posted here are shown as clothed. All the women could definitely be naked.

There are people of many colors featured in the ads as well as both men and women. Just because one or two of them feature an African-American doesn't mean they're a throwback to slavery.

The campaign message is "Only you can silence yourself". Most of the other images are the types of mouthbinding typically used in consensual play-piercing and bondage scenes. The first image here, however, is more typical of torture-porn, and is not something a person could ever do to herself. It is very highly sexualised, draws on misogynist movie tropes, and is out of place with the rest of the campaign.

Similar problems may apply to the second image, also; I'd bow to the views of Africa-American antiracism activists on that. I certainly found it jarring.

If it were a bunch of people holding their hands over their mouths, or somehow clearly silencing *themselves* the tagline would make a lot more sense. As it is, I'm not sure *how* Jessica Alba is supposed to get out of that electrical tape... she's not just silenced, she's tied up and visibly helpless.

...and why an 8 ball for the second image? Does that signify something? Or is it just shying away from more realistic bondage gear?

Sarah, an 8-ball is also a measure of cocaine or crystal meth, which makes it even more disturbing.

These images in no way portray violence as sexy or desirable -

I've seen one man today, on a NZ blog discussing this, say:

Ok, so I’m the only one that goes weak at the knee’s seeing Jessica Alba in psuedo-bondage gear… ?

I doubt that he's the only one.

Oh, geez, black-people-and-drugs reference? So I guess women get rape/murdered and POC are junkies?That's classy... 9.9

[...] of a Democratic adminstration with a terrorist attack, pundit hypocrisy, political networks, a voter registration campaign that uses bondage imagery, suspiciously delicious polling techniques, and trends in media coverage of Obama versus Clinton [...]

OMG Jessica Alba I love you and you are sooooooo beautiful and nice. You are like my role model i wish i could meet you that would be the best day of my life